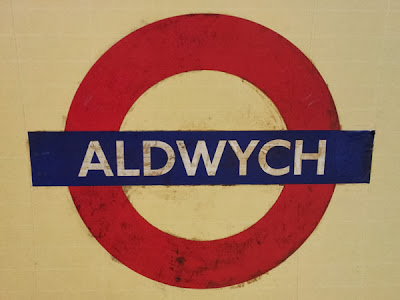 106 years ago yesterday, a new London Underground station opened in the West End. It's purpose was to give the middle classes easy access to the heart of London's theatreland. It was initially called Strand, but was renamed Aldwych in 1915.

Sadly, the station was a failure. Built at the end of a one stop spur on the Piccadilly line, the number of passengers was lower than expected and when several leading theatres in the area shut down, Aldwych became a white elephant. Surprisingly, it wasn't closed until 1994.

Today, the London Transport Museum offers a limited number of guided tours of Aldwych station. The demand for tickets is high and the tours are usually sold out within hours. Luckily, I'd found out in time after making a brief foray into the Twitterverse and booked a ticket for yesterday afternoon.

The train from Lewes was packed. At first it looked as if it was standing room only, but then I noticed that someone had done the old coat and bag trick on the seat next to them, so I took great delight in making them move their things. One point to me.

As the train pulled out of Lewes and entered a tunnel, I got my book out. I wanted to find out what Alice Vavasor had written in a letter to her cousin Kate. Then it started: pchhh, pchhh, pfffff pfffff, pchhh pchhh, pfffff pfffff... My seat-hogging companion's earphones were just loud enough to distract me from reading, but not noisy enough to warrant a complaint. One point to them.

I got my smartphone out and decided to watch a video. After scrolling through the list, I settled on an episode of 'The World at War', which I've been watching over the last couple of months. The credits began and the episode title appeared: Japan.

I spent the next 50 minutes watching footage of Pearl Harbour, 'Zero' fighters, Japanese people performing Nazi-style acrobatics, Tokyo being bombed and the bloody capture of Iwo Jima. It was fascinating stuff, but for some reason my companion seemed to be increasingly agitated. I wondered why. It wasn't as if he could hear the explosions through my headphones.

As the train drew into Victoria, my companion frantically gathered his stuff together, as if he couldn't wait to get off the train. I was busy watching footage of Kamikaze pilots, but turned off my phone and got ready to leave. I turned round and looked at my companion's face for the first time. He was Japanese.

I wondered how interesting a station that had only been closed 20 years ago would be, but hadn't realised that the veneer of modernity had been stripped away and what remained was a series of fascinating time capsules: 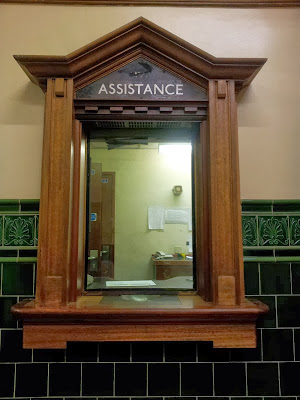 The lifts are now out of service, so visitors have to be prepared to use a 160-step staircase: 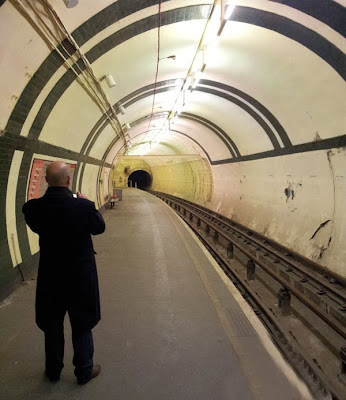 This platform has been used in many well-known movies and television series and if you pay enough money, London Transport will even arrange for a train to appear. 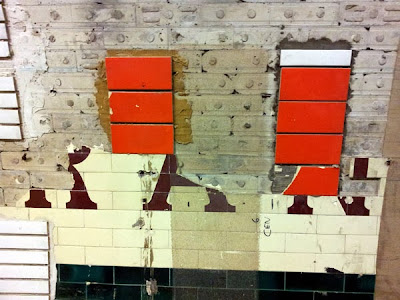 This is what's left of the 1907 tiles that bear the station's original name: Strand. 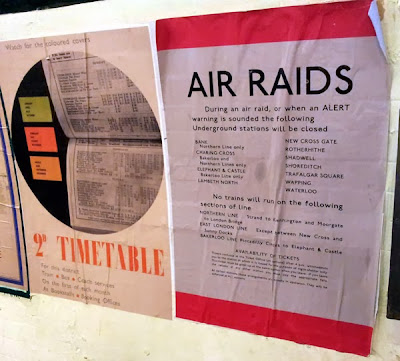 During the Blitz, Aldwych station was a popular destination for Londoners who wanted to escape from the bombing. As the station was at the end of a branch line, families could camp on the platform for the night without disrupting any passengers.

George Formby and other celebrities of the day used to perform concerts on this platform, some of which were relayed to the neutral USA as part of a propaganda effort. 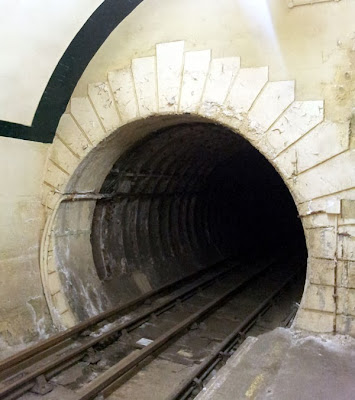 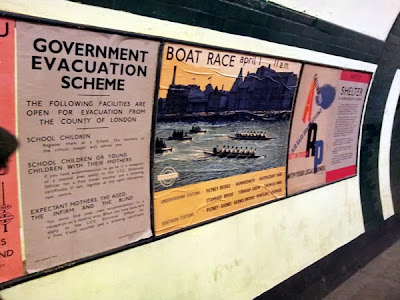 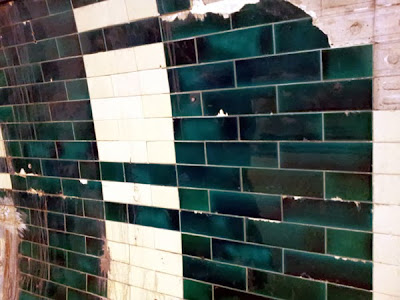 It's a pity that these original titles haven't been looked after properly in the past, but they must have seemed so commonplace, nobody could see their value. 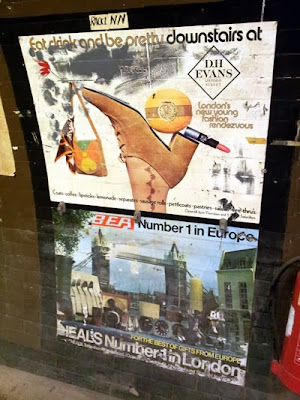 These early 1970s posters were very familiar to me, from the days when a trip "up to London" was the greatest of treats. My parents regarded the city as a den of vice, populated by hippies and other ne'er-do-wells.

We only lived a dozen miles from Hyde Park Corner, but it might as well have been a hundred. 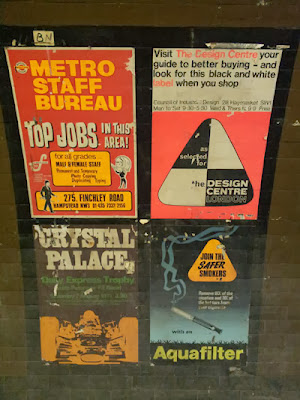 The poster below was one of many that appeared before Britain joined the European Economic Community, as it used to be known. 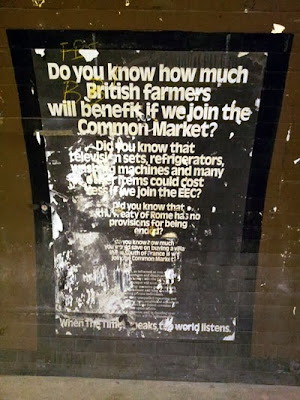 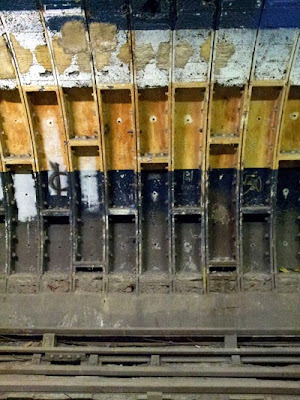 Above and below are photos of a platform that has been protected by a Grade I listing. Apparently it has some very unusual insulators, for people who like that sort of thing. 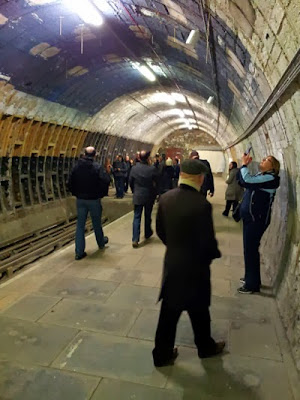 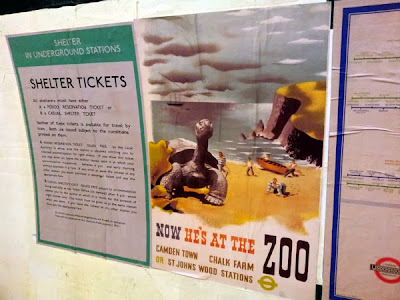 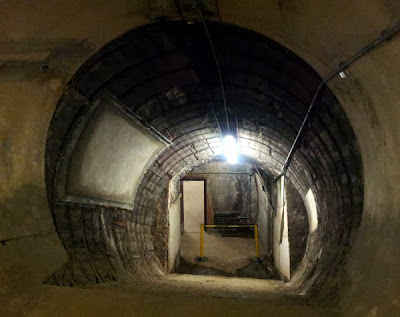 The police regularly train sniffer dogs at Aldwych station. Our guide told us that for some unknown reason, the dogs refuse to enter this tunnel.

The tunnel complex is a little spooky, but the best parts are those that haven't been lit:

A couple of friends had joined me for the tour. They were both as impressed as I was, but one was disappointed by the absence of any maruading aliens. For British people of a certain age, the London Underground is synonymous with this: 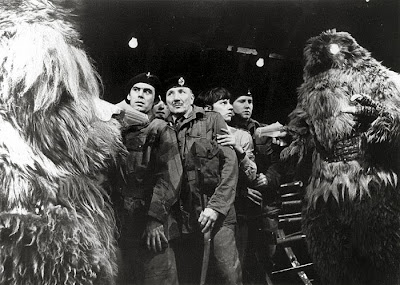 I must admit, I was also disappointed by the absence of rats, zombies, cybermen, yeti, third generation cannibals or SIS employees.

However, the guided tour was excellent, striking the right balance between being informative and giving visitors time to look around and take photos. I'd happily go again. If I do, I'll bring a proper camera instead of relying on my phone. 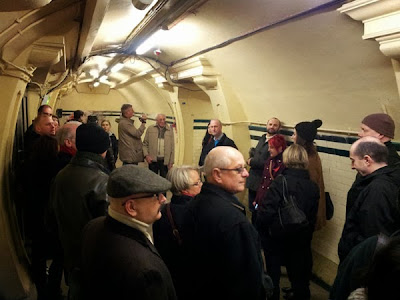 Apparently, Aldwych is one of 26 disused tube stations. I hope that London Transport are able to make a few others accessible for visitors, without actually turning them into proper tourist attractions.

Indeed, one of the best aspects of the tour was the absence of tourists. I'd just spent half an hour trying to dodge my way past hordes of people aimlessly dragging suitcases on wheels. The Aldwych tour filtered out the box-ticking "10 Things You Must Do" brigade.

As you can see, quota of white, balding middle-aged men was predictably high, but there were also a couple of beanie hat-wearing 'urban explorers' and someone who was particularly interested in some of the Art Noveau features.

After the tour, we went for a drink in the Strand, followed by superb curry in the India Club. I left London agreeing with Dr. Johnson, but also felt grateful that ten minutes away from my front door, I have this: 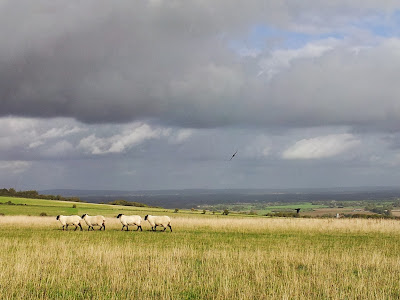 Looks like a lot of fun. Seems to me that with 26 closed stations they ought to be able to make one into a proper tourist destination. ;-)

Twenty five years ago, for a treat, I took my toddler boy for a bus ride of twenty minutes into the city so he could see the tramway...
I was fascinated to observe how.. exotic the change of venue was for my toddler, as though the city were another world after our suburbs, which, sadly, have no more sheepies left in them.
But.. my then toddler was much more intelligent and perspicaceous than I. He KNEW that twenty minutes away was another world, and he reacted just like... a tourist in it.
Very interesting, the sign about the European Union. It's hard to tell if it's an ad FOR... or AGAINST the E.U. What is your diagnosis, doctor ?
On this particular subject, I tell my upward climbing daughter in law that every cheap item from China she buys threatens the work/ jobs of a flesh and blood person in France, but she is still too young to understand this right now. She has been too brainwashed by the idea that one of the ten modern commandments is "you MUST spend the least amount of money possible for something" or.. you're a schmuck.
Thanks for the fascinating info.
I hate the Paris metro now. Something about being underground, in the constant presence of neon lights to boot, gets on my nerves these days...

I hope I don't sound too grumpy about tourists. I realise that I'm a tourist too when I venture beyond these shores.

Debra - It seems to be pro-EEC. I remember my father was passionately against it to his dying day, as he felt that we were abandoning our ties with the Commonwealth.

You're right to tell your daughter to buy French. Even I do - I own a Citroen and selflessly do what I can to support the French wine makers.

People who go on tours are not tourists? ;-)

Are people who have sex sexists?

Ha, Steerforth, I thought for sure you were going to say the London Underground reminded you of this -- Five Million Years to Earth, originally Quatermass and the Pit in the UK. A truly creepy film, complete with (if I remember correctly) a face-melting sequence that may have been the basis for the same trick in Steven Spielberg's Raiders of the Lost Ark.

Very interesting about the police dogs refusing to venture into the one tunnel. Hm.

(Hopes blogger.com allows the HTML tags for href, otherwise this will look a mess.)

I loved going up to London for a treat when I was little. The yetis did for me though - I was scared to get on a red (old) tube train as in the Dr Who episodes for years - only the new silver ones.

I love all those old posters, especially 'The Design Centre' one.

Modern Dog - I should have mentioned Quatermass and the Pit - I only watched it a couple of months ago! I agree - it's surprisingly creepy.

Annabel - The red tube trains were built in the late 30s and were still in service on the District line when I was at university in the 80s. I thought they'd been finally retired but, as I discovered two years ago, they're now in use on the Isle of Wight! It was surreal being on an old Underground train in the middle of the countryside.

Fabulous...without question there are monsters and aliens hiding in all the tunnels you can't go down. We were lucky enough to get down to Aldwych earlier this year to enjoy a contemporary music concert...various pieces played in different parts of the station and tunnels...and even on an old train that was there at the time...

Nota Bene - That sounds wonderful. I imagine the acoustic was fantastic and the music was a cut above the usual busker fayre.

Wow! What an interesting tour!

I think I like the last pastoral scene with the sheep best though. xoxox

Carol - I like the contrast between the two. Oddly enough, I spend a lot more time in central London now than I did when I lived in a London suburb.

Fabulous post. I used to use Aldwych if I was feeling lazy when I worked across the road at BBC in Bush house, until the station closed in 1985. It also crops up in Geoffrey Household's wonderful "Rogue Male" book written in the 1930s and often dramatised on BBC Radio 4 Extra.

You've just reminded me. I think I have a book about haunted disused underground stations somewhere. Must dig it out!

Chrissy - Thanks for reminding me of the existence of Rogue Male. I was about to read it some years ago and for some reason, got distracted. It's now at the top of the list of 2014.

Laura - You must! You and O can enjoy some 'urban exploration' in search of the subterranean supernatural - but mind the gap!