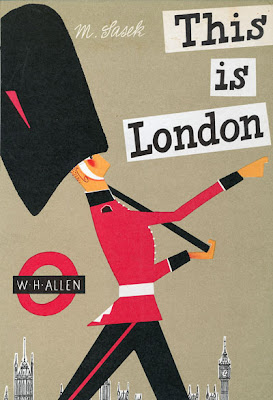 One of my favourite books that I've come across recently is a large, illustrated hardback called 'This is London', by the Czech artist Miroslav Sasek.

Published as part of a series that includes Paris, San Francisco, Rome and New York, Sasek's 1950s-style illustrations have gained a cult following and there is an excellent tribute website here.

I'd been meaning to keep 'This is London' for myself, but forgot to remove it from sale. This morning, my heart sank when I saw that it had been snapped up by a gentleman in Spain. My loss is his gain.

But before 'This is London' goes in the post, I thought I'd share some of the images. Sasek's book was published in 1959, so this is a London of City gents in bowler hats, chirpy Cockneys and, of course, this: 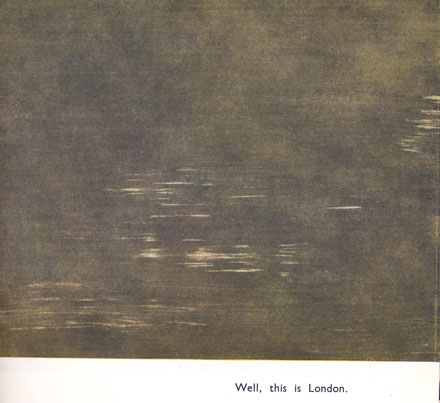 By the time I was born, the infamous smogs were a thing of the past (partly thanks to our old friend Sir Gerald Nabarro), but it took several decades for London to lose its association with thick fog.

I wonder if London will ever lose its association with most of the following images: 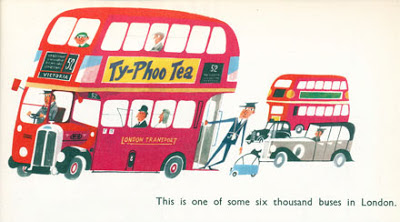 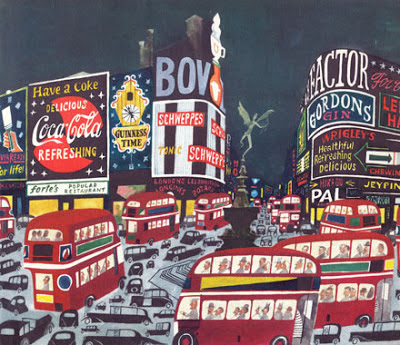 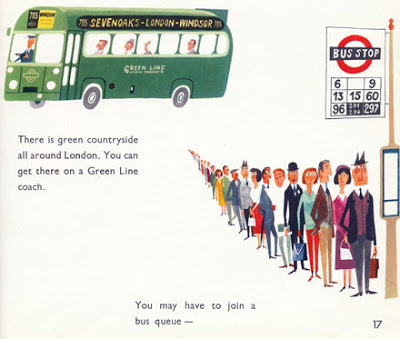 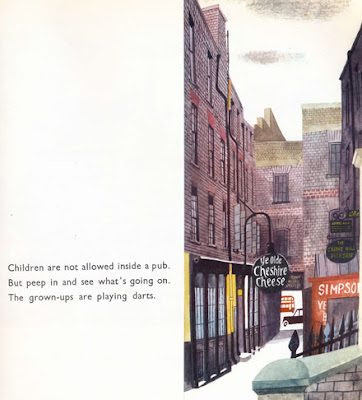 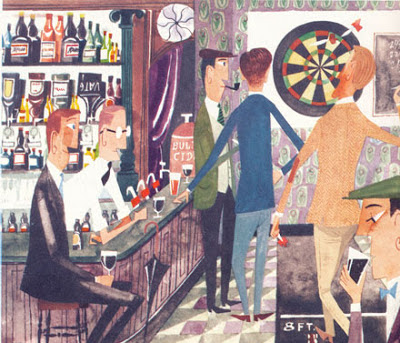 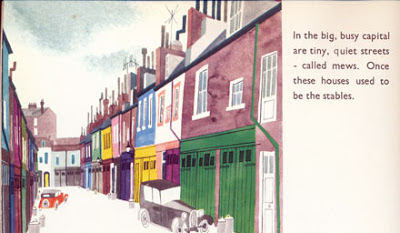 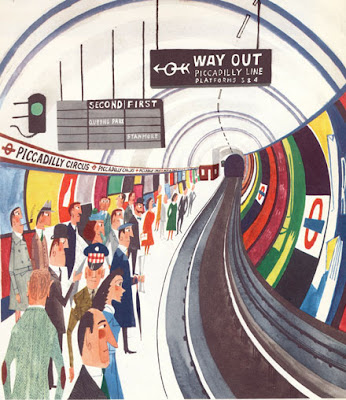 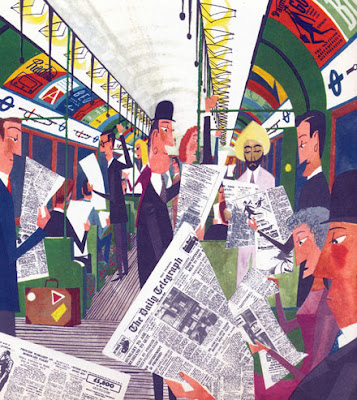 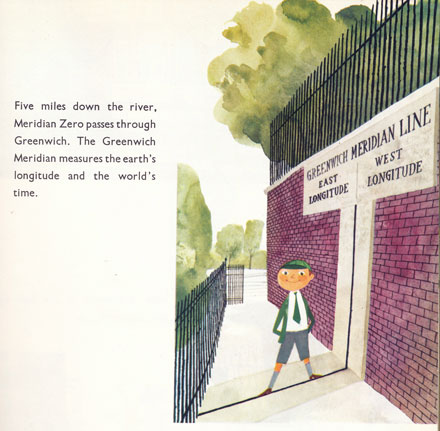 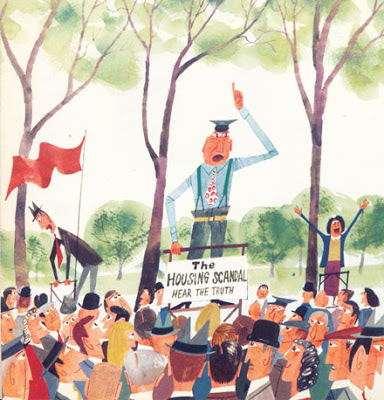 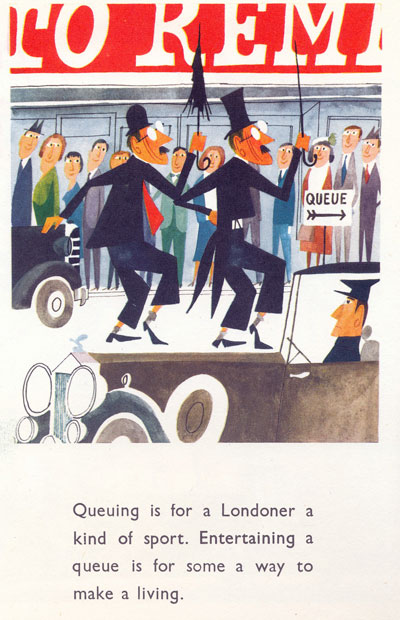 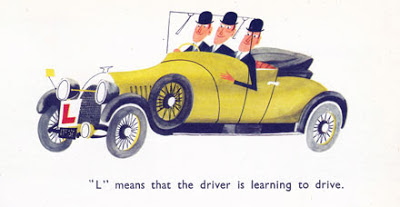 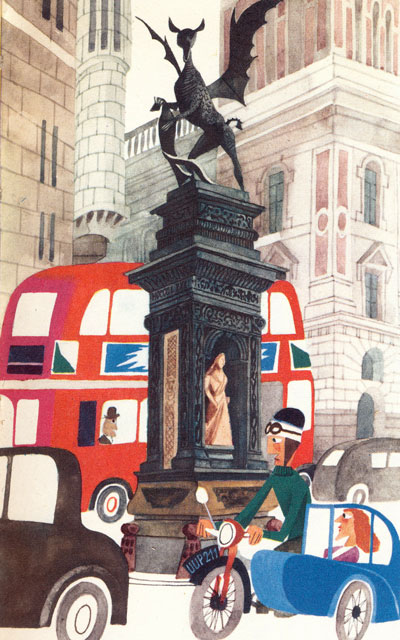 Half a century on, the bowler hats have disappeared and the Cockneys have mostly moved out to Essex and Kent, whilst commuters are increasingly likely to be reading the Daily Telegraph on their smartphones. London feels very different to the place I knew as a child - better in some ways, worse in others.

I shall be in London on Sunday afternoon, as I'm going to see a friend in a concert called 'Songs My Mother Taught Me' (a bit of misnomer for a collection of complex 20th century choral pieces; unless it was a very aspirational, middle class mother). But before that, I'm going to see this: 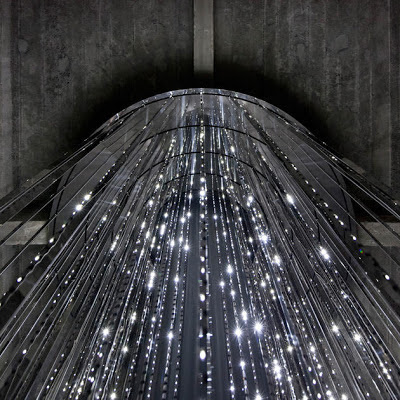 It looks slightly more promising than Martin Creed's Turner prize-winning work: the lights going on and off.
Posted by Steerforth at 4:38 pm

Lovely pics - I particularly like his Picadilly Circus and the Undergound. Art rooted in time.

Thanks for showing the illustrations before the book goes off to its new home. I hadn't heard of him before.


Do you sell your stock on different websites?

Hope you enjoy your time up in London.

We had this when I was a kid. It was the early 80s, we lived in New Zealand (having moved from West Ham when I was 2), and I had *no idea* that London wasn't stil exactly like it was in the book.

I love the illustrations, but the one phrase that stood out was "children are not allowed inside a pub". I spent many summer hours sat in a beer garden with a Coke on my own in the 70s...

You can borrow my copy - it is such a great book (as a child, I specially liked the different milk companies - or maybe just seeing something from my own life in a book - plus the explanations of the various policemen's helmets and guardsmen's hats and the picture of some men carrying fish on their heads at Billingsgate market I think it was [am I just making all this up or are these memories accurate - I'll have to go and check now])

Oh boy...I love this! Lucky Spanish guy...I feel your pain. Thanks for sharing the gorgeous illustrations.

Excellent post, Steerforth. I wasn't aware of Sasek before this. Thanks for flagging his work. Have a 'fun' day out.

What a gorgeous book - I want one too! Hope you enjoy the Hayward light show.

Fabulous artwork which captures the London of the time perfectly.

Rog - I love the one of the tube station too. If I had a larger house, I'd have prints of them on the walls.

Catherine - Yes, I sell through most of the main websites, but don't have a website of my own. I think most people are looking for a specific book rather than a seller. People only buy from me because I'm cheaper and don't have an awful rating. However, I'd like to have a proper website one day.

Helenalex - No disrespect to West Ham, but your parents probably made a good move! I don't know when you first went to London, but my early memories are of a disappointingly shabby place. It smartened up a lot in the 80s.

moo - Yes, that was my wife's exprience too, as her parents liked a drink or five. I quite
like the idea of child-free places! and at least you got a comic! My parents didn't drink, so no Beezers for me.

Donna - I hope that the Spanish man enjoys it. There isn't a book on Madrid, but perhaps that's because of Franco. I don't think Sasek was keen on regimes - he'd already fled from communist Czechoslovakia.

Martin - I can't wait. The exhibition has been featured on the BBC News website and it looks really good.

Sarah - Yes it's very nostalgic. If I had a time machine, pre-1970s London would be one of my top destinations.

Fabulous pics - love the little chap standing on the Meridian line and the generally jaunty feel.

I'm beginning to think all books should have pictures. And less words.