Portsmouth. It should be such a lovely place - a historic naval dockyard, Charles Dickens' birthplace and a wealth of literary associations, from  Nicholas Nickleby to Mansfield Park. But sadly an unholy alliance of the Luftwaffe and postwar town planners have brought this city to its knees. It was probably always a bit rough, with all of those jolly tars wandering the streets, but was it ever this ugly? 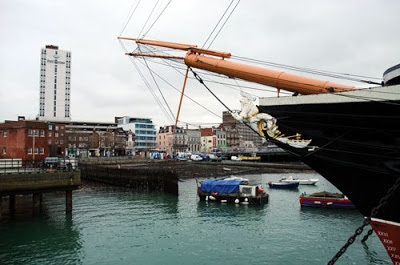 In fairness, the local authorities have tried to spruce up the place recently and the Spinnaker Tower is a striking landmark: 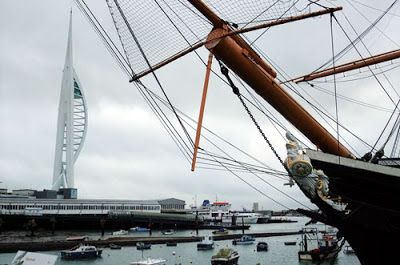 But the only real solution to Portsmouth's woes would be to bulldoze most of the postwar buildings and replace them with a mixture of pre-1940 replicas (à la Warsaw) and some well-designed modern alternatives. Naturally, you'd need a contemporary art gallery as well, to attract some middle class people from Stoke Newington.

The ship above is the HMS Warrior - the world's first iron-hulled warship. It boasts an array of impressive statistics about armaments, horse power and speed, but I'm more interested in the interior design. I like to be comfortable: 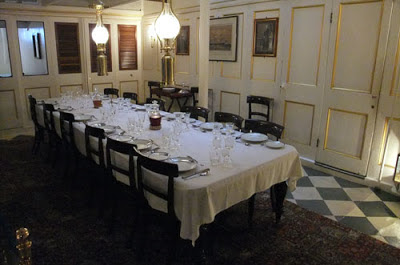 This all looks terribly civilised, as does this: 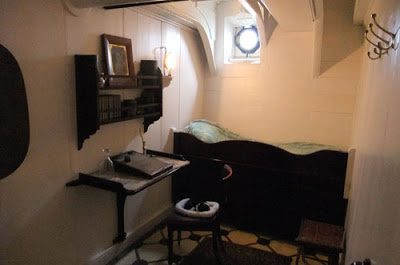 Perfectly fine for a Second Lieutenant and probably no more spartan than their room at Harrow, but blow stairs it was a different story. The HMS Warrior had ten boilers that were heated by four large stoves each. The combined heat of 40 stoves created a working temperature of 120f and the men who worked there were paid an extra 25%, to compensate for the appalling conditions.

I'd decided to take my younger son here for a visit to the HMS Victory, but ended up buying a ticket for the entire dockyard. It was an odd place with a rather rum selection of visitors, including an eight-year-old boy who was dressed like a 1920s country squire, with a Herringbone Tweed jacket and matching cap. He was accompanied by an old man with ancient hearing aids that were so large, they looked as if they could pick up echoes from the Big Bang, or the movements of enemy submarines.

As we approached the Victory, I saw two of the Royal Navy's new top secret stealth warships: 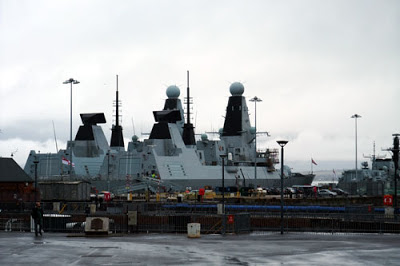 I couldn't help wondering why these 'top secret' vessels had been docked right next to a major tourist attraction. Shouldn't they be in a remote part of Scotland? The Hood from Thunderbirds wouldn't need his secret camera here: 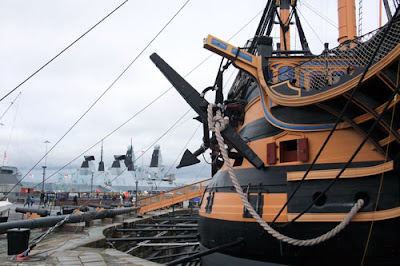 Can you see them behind the Victory, or has their stealth technology defeated my digital camera?

We'd booked a guided tour around the HMS Victory and I was looking forward to gory tales of Nelson's death, maggot-infested biscuits and hasty amputations. Unfortunately the tour was ruined by the behaviour of several children, who kept banging and rattling every artefact they came across. One particularly dippy woman allowed her 18-month-old to stagger freely around the decks until it inevitably had a collision with a sharp object.

However, in between the interuptions, I managed to learn that Nelson was pickled in brandy so that his body could be preserved for a state funeral, Captain Hardy was 6'4" and amputations were performed without the benefit of alcohol.

After the tour I congratulated my son for behaving impeccably and decided to reward him with a visit to an antique amusement arcade that included familiar machines like the menacing Jolly Sailor and the Fortune Telling Lady. However, there was one that I'd never seen before: 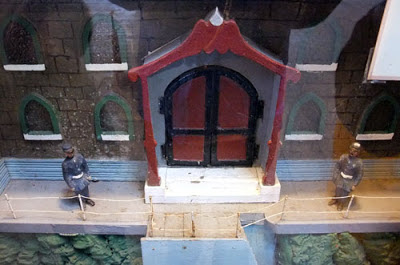 Pop 20p in the slot and the doors will open, to reveal a reconstruction of the public hanging of James Aitken, alias 'John the Painter' - a man who supported the colonial rebels in America and expressed his solidarity by setting fire to the rope and pitchyard store in the dockyard at Portsmouth. The animated execution was a little grim for small children and I regretted finding the extra 20 pence piece.

As we reached the end of the visit, I wondered what my son had got out of it. I'd become so jaded by a succession of disastrous visits to museums and buildings with his older brother, I'd almost given up the day trips. Perhaps all children hated them.

I looked at my son. He was happy, skipping along the dockyard path with a shy smile on his face. On the way back, we talked about future days out and my son suddenly announced his plans for going to university. He seemed to have an appetite for life. Why was his brother so different?

As we left Portsmouth, I saw a sign that pointed the way to Charles Dickens' birthplace. I'd missed it for the third time. I told my son, who paused for a moment, then turned to me and said: "Wouldn't it be funny if they'd had computer games in the Stone Age."
Posted by Steerforth at 11:45 pm

Having grown up in and around Pompey, I agree with most of your analysis, but to be fair, it does already have a modern art gallery.

I lived in the Portsmouth area, twice, for several months back in the early and mid-'80s, and have taken the Victory tour at least three times. Bought a stack of postcards showing the interiors also. I don't remember Portsmouth being particularly ugly, but perhaps it's changed in the last 25-odd years.

As well as the Dickens connection, I believe that Sir Arthur Conan Doyle also had a medical practice in Southsea for a period. I've got many happy memories of my time there.

Glad your boy enjoyed the tour.

Tim and Kid - I clearly need to do some more research. A return trip to Portsmouth and a visit to the gallery and Dickens' birthplace have been added to my 'to do' list for 2013.

Sounds as though your day had more positives than negatives, Steerforth.

My son-in-law worked in Portsmouth for several years as a Senior Naval Architect. He once surveyed HMS Victory, prior to some long overdue restoration works. A welcome break from the stability and buoyancy issues relating to new aircraft carriers!

Back in the 80s, when we took our daughter for a guided tour of HMS Victory, would you believe she became seasick? Not uncommon apparently.

Martin - I must admit, I thought that I could feel the boat move a couple of times. But perhaps your daughter felt sick because she was disoriented by lack of movement?

A quick trip across the harbour (the ferry is next to Warrior) and you could have visited the submarine museum, where I used to work. The interior design on show there is not as civilised as in previous centuries.

I went there a few years ago and really enjoyed the guided tour. I've always been fascinated by the bizarre and claustrophobic experience of living on a submarine.

Perhaps I'm sharing the most tenuous link with Portsmouth ever, but I have been there - stayed a week with my late friend's eccentric aunt.The house must have been the place to be in the 70's, it was grand and full of kitsch wares. We spent the week trying on polyester cocktail dresses and going up and down the 3 storeys on a stair lift. I thought it was a great place and was sorry to leave - everyone in Portsmouth seemed so cool compared to Ponty (not difficult).
Well done for getting your son to a stage he can really enjoy informative days out - I'm still trying, but probably fall into the 'annoying' parent category with my sons messing around and touching things they shouldn't.

I'm so glad your son enjoyed the tour. And I loved his comment at the end of the day about having computers in the Stone Age. Shows real imagination, that! :o)

That little execution arcade game brought back memories of its gruesome twin, which I saw in New Zealand over sixty years ago: the beheading of Marie Antoinette. Essentially identical.

(I wasn't supposed to be in that arcade either - my penny was meant to be my admission to the sea baths. Naughty girl.)

If you really want to read about maggoty food on board old ships, try my friend Joan's blog. She has maggots to spare today: http://joan-druett.blogspot.co.nz/

I see your son has effectively just rediscovered the core idea behind The Flintstones… :-)

Lucy - It's probably a fun place to stay if you know someone there. That makes all the difference. I've some great times in some awful towns (like Sidcup).

Carol - It's so nice being able to go on days out again after recent difficulties. I hope there'll be many more to come.

Dale - Many thanks for the link to the blog. I shall be a regular reader.

Re: the machines - they must have produced a generic version that could be adapted to suit local appetites. Poor old Marie is a strange choice for New Zealand, but I can't think of an alternative.

Adam - Perhaps I should buy him a DVD of it (although do I want to risk the prospect of hearing him say Yabadabadoo! for the next few months?)

Haha, Steerforth, as someone who spent the 1980s resident in Sidcup, and now spends his weekdays in Portsmouth (well, Southsea, actually)...I enjoyed reading this post and its comments. I discovered your blog via your quoting of Larkin's 'An Arundel Tomb' in a post a while ago, and return here from time to time :). I've actually grown quite fond of Portsmouth and Southsea (particularly the latter)since my job relocated to Hampshire from London about three years ago. By the way, I think your son (and you) might also appreciate a trip to the top of the Spinnaker Tower on a summer's day; there are some good views from up there given the weather...:)

yizhivika - I must give Portsmouth another chance. I think I'll go by train, as ring roads always make a place seem more depressing.

Maybe the new one is nicer... I like it!

It looks lovely - and far more olde worlde than the original.