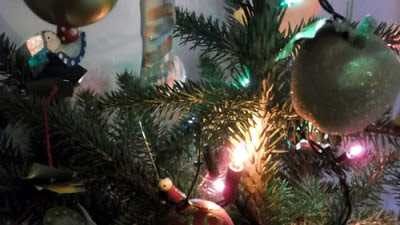 Yesterday evening, my wife and I set off for a Christmas party in Lewes, with a hastily-bought bottle of Pinotage that promised "smoky, bramble flavours with a hint of tropical fruit". Thankfully it didn't have a comedy label like 'Mad Goat', but I still wished that I'd gone to Waitrose.

After walking for five minutes along a succession of dark, damp, slug-infested alleys, I asked my wife how much further the house was. She looked confused: "I don't know. You're the one with the address." At that point, I realised that neither of us knew where we were going.

A man walked past and looked at the bottle of wine. I felt embarrassed, as if he could tell that we were lost. My wife looked ahead and started walking purposefully: "I'm pretty sure it's just up here. It's either 50 or 15. We'll know by the noise."

Sady, there was no noise. We walked past a succession of eerily quite homes, occasionally catching glimpses of flickering television screens or people sitting around tables, but unless it was a very sedate party, we were in the wrong street. We turned round and started to walk home, when my wife suddenly said "Ah!"

Walking in the opposite direction were a couple that she recognised, also clutching a bottle of wine. "Is this it?" she asked. They nodded. The door opened and we entered a silent house.

It turned out that the party was a victim of the norovirus, with eleven couples cancelling, leaving a small rump of guests. At first, this seemed like a great misfortune, but I ended up having a much better evening than usual.

Parties can often be rather painful affairs unless you know most of the people there. You walk into a room full of unfamiliar faces, where everyone else seems to know each other. They don't, but that's always how it looks. Terrified of being the person who isn't talking to anyone, you spin out the process of hanging up your coat and handing over the bottle of wine, quickly scanning for any possible openings.

I always manage to find someone to talk to and they often seem as relieved as I am when I introduce myself. Then, for the next half hour, we go through the motions of asking each other what we do, which part of London we're from and why we're glad we moved to Lewes. So far so good.

Unfortunately, after getting off to a flying start, the conversation enters the danger zone, where paranoid thoughts start to flash through your head: "Am I monopolising this person? Are they getting bored. Am I getting bored? Would it be rude to go off to get a drink..." This is the aspect of parties that I always hate. Sometimes I wish that someone would just ring a bell and we'd all have to shuffle round, a bit like speed dating.

But on the other hand, it can be good to be stuck with someone for long enough to exhaust the polite platitudes and start to get a glimpse of the real person. Last week, I met an odd-looking man who was dressed like an overgrown boy scout, with a face that resembled a Spitting Image puppet and a voice like a 1970s station announcer at Clapham Junction. He didn't seem to have any sense of humour and I thought "Oh God, this is going to be hard work."

Then, during the next half hour, he managed to destroy all of my first impressions by turning out to be one of the most interesting people I've met, with an extraordinary past. He had a sense of humour too. As if I needed any further evidence of how wrong I'd been, after half an hour, a beautiful woman at the other end of the room came up and told him that it was time to go.

In fairness, most of the women seemed quite beautiful that evening, whereas the poor men were represented by a sea of bespectacled, balding heads. I wish that we could 'scrub up' like the ladies, but the combination of a hot, humid room and 'Just for Men' would have made it look more like Death in Venice.

Last night's party was more of a gathering, but I enjoyed it a lot more. Without the noise and crush of a crowded room, the conversation seemed to flow more freely. I met some lovely people and lost track of the time, which is always a good sign.

We left at 10.30 - earlier than I would have liked - but when we turned into our road, I could see my mother anxiously twitching the curtains, as if I was still her teenage son. Some things never change.

Christmas Day will be a fairly sedate affair. My wife and I are both only children and don't have many living relatives. Unfortunately, that hasn't stopped my wife from behaving as if she's preparing for a royal wedding.

I'm keeping my head down. In two days it will all be over.

Email ThisBlogThis!Share to TwitterShare to FacebookShare to Pinterest
Labels: christmas

Merry Christmas to you and your family too.

My mother always has her coat on and is sat in silent darkness when I return from a night out where she is babysitting.I'm left feeling like I've been really naughty and will be grounded for a few weeks

I'll have a difficult day, with my sons disappearing in the afternoon laving me all alone. I say difficult, because a mum should feel bereft - but I may just sit in an unusually tidy home, drinking reasonable wine and happily looking ahead to a very busy 2013.

'See you on the other side' as so many people seem to be ending their blog posts at the moment.

Merry Christmas! and bon bout d'an (so the locals here use to express "See you on the other side").

Usually I too am glad when the frenzied annual event known as Christmas is over, but this year seems to be different.

Or I'm different, which is probably more accurate. I seem to be in less of a rush. Less obsessed with perfection -- in gifts, table settings, food. I am gradually learrning that "good" is sometimes even better than "great" and a whole lot more fun.

So I hope your holiday turns out to be a pleasant surprise too. And, as you say, roll on 2013 -- and we can all take comfort from the fact that at least the world didn't end last Friday!

Merry Christmas and a Happy new year to you

Happy Christmas, Steerforth! Perhaps because the party you describe was small, or perhaps because you're a bit younger than me, you don't mention the goddam impossibility of hearing what the other person is saying. "Mwah ha ha Julian ha ha and Amanda ha ha Khachaturian Toronto."
"Yes," I say, and how are things at the office?"
"Meh ha ha ha Jubalcain, as I already mentioned."
Anyway, happy Christmas and all the best for 2013.

Lucy - Yes, the bloody coat on routine. How long does it take to put a coat on? They're just making a point.

Carol - Good for you. The quest for the perfect Christmas only leads to exhaustion for the host. I've been trying to explain to my wife that her careful planning is unnecessary, particularly as she lives with three males - we just want mince pies, a Bond film and a few board games. Not Christmas-themed loo paper, countless decorations and festive table settings.

Desperate Reader - And a Happy Christmas to you!

Anne - No, I've just hit the reading glasses stage, but I sometimes pretend to mishear people if there's an opportunity for a cheap joke.

Your reflections on being a quiet partygoer made me think of the new book Quiet, about quiet people.

Anne - and those people who address you from quite far away in a near whisper!

Happy bit between Xmas and New Year, everybody.

Shelley - Thanks for reminding me about the book. I read an interesting review months ago, then forgot all about it. I looks right up my street.

Matt - Many thanks for reading the blog - I shall try to keep going (and improve the quality and range of posts) in 2013.

Richmonde - I wish you a very happy and prosperous 2013. I look forward to reading more Art of Words next year.

Going out can be a minefield. We were recently invited for brunch. "Now don't dress up," the hostess said. At home, while getting ready, my husband said, "Perhaps my pajamas would do." When told they wouldn't, he grumbled but put on a decent shirt, pullover sweater, and a pair of grey flannel slacks. I wore a pair of knee-high black leather boots, a plaid skirt and a white sweater -- and when we arrived, I was told I'd over dressed. I thought I was about as casual as I wanted to be in public, but sometimes, you just can't win ...