"Do you have that cookery book with the red cover?" 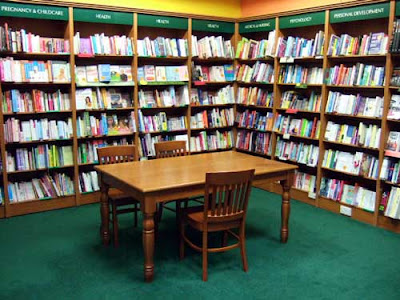 After six months on Twitter, I have realised that it probably isn't for me, or I'm not for it. But I love reading other people's tweets (especially when they're not telling you about their cat or the great review their latest novel has just had).

I particularly enjoyed this tweet from a few days ago, by bookseller @lucyfishwife:

A customer asked me where we kept kids' books for 20-yr-olds. I pointed at the Fiction section.

How I miss dealing with the general public.

It's now over five years since I last dealt with a customer face to face. Although I still sell books, I don't dare to call myself a bookseller any more because I think that unless you're prepared to meet your public, you're merely a supplier. Internet bookselling is like cybersex, stripped of the agonies and ecstacies of real human contact. I love it.

Real bookselling was a little like Russian Roulette - you never knew whether the person approaching your desk was going to ask a normal question like "Do you have a copy of X by Z?" or a completely daft one like "I live in Surrey but have a holiday home in Staffordshire. Do you have a book of walks that just covers Surrey and Staffordshire?" (a genuine question, by the way).

Reading @lucyfishewife's anecdote reminded me of some of the gems I've been asked over the years:

"Could you recommend a book for someone who only has three weeks to live?" (I suggested short stories)

"It says Biography and Memoirs. Why don't you have an autobiography section?"

"I want that new gardening book. The title? No, I can't remember. Author? Oh, it's a lady and it's green. Do you have it?"

"I want a novel with a moral dilemma." (Which is like saying "I'd like a motor car with an engine")

"Why have you moved your fiction section downstairs? Last year it was upstairs." When I replied that it had always been downstairs since we'd opened, two months ago, suggesting that they were confusing us with another shop, the customer shook their head, "No, it was definitely here and it was upstairs."

"Will I like this?" Asked by a heavily made-up woman in her late 60s, waving a copy of Foucault's Pendulum. I wanted to say "How the **** should I know?", but smiled sweetly and said "You'll love it", which turned out to be the right answer.


"Do you have any books about sex with animals?" The same man asked this question on a weekly basis.


"Have you got that book about cholera?" I asked if he meant Marquez. He nodded, but then leaned forward and said, rather patronisingly, "Actually, it's pronounced Marqeth." His smug, punchable face was a picture when I patiently explained the difference between Castillian and Latin American Spanish.

"That book you recommended to me last week? It was crap." No, you were just too dim to appreciate it.

"If I ordered the book now, could you get it in time for Christmas Day?" Asked at 3.15pm on Christmas Eve.

As time went on, my answers became more confident. When the customer who wanted coffee table books on Paraguay huffed and puffed about our glaring omission, I could confidently point out that this was the first time in ten years that anyone had asked me for a book about Paraguay. I also knew how cheeky I could be without provoking a complaint, perfecting a subtle insoucience that Jeeves would have been proud of.

But in the end, you get battle fatigue. A man I worked with who was 17 years older than me had become an embittered Basil Fawlty figure, picking unnecessary fights with perfectly harmless customers because he was at the end of his tether. When I saw how he treated a poor woman who'd innocently asked for a self-help book by Betty Shine, I made a mental note to get out of bookselling before I became like him.

We lost touch, but two years ago I bumped into my ex-colleague at a historic building, where he was a voluntary guide. He seemed happier than he'd ever been in the bookshop. I knew how he felt.
Posted by Steerforth at 6:59 pm

Lovely post.
I'm afraid I have been an idiot customer in the past. I wanted a book called 'The Queen of Whale Cay' and asked for 'The Queen of Wally Key'. Have got embarassed asking for 'A Woman Looks at Men's Bums' that I wanted to buy for my friend for christmas and sent an assistant on a wild goose chase looking for the wrong title by the wrong author. I apologise to all booksellers everywhere. xx

The Queen of Whale Cay is one of my favourite books. If I could be reincarnated, I'd definitely come back as a wealthy lesbian speedboat champion in the 1930s.

I don't think booksellers minded the confusing information - it made the job more interesting. What we couldn't stand were the chippy customers who would get angry when we couldn't decipher their cryptic clues.

Ah... I don't miss it but I have fond memories. My favourite one was a simple query, but it tickled me. "Where can I get a lamp?" Um, in a shop that sells lamps?

Booksellers, we have ALL of the knowledge.

These days I work part time in a public library. It brings it all back. A recent dopey customer of the day: 'do you have anything on here for children?' 'Here' being the internet.

As a manager and (later) buyer, during my years with Canada's big box bookstore I rarely worked the floor. That said, I'd earlier treaded the carpets as an employee of Sam the Record Man, the country's big music chain.

Two customer interactions stand out. The first, occurring each and every day, had to do with confusion over the way our inventory was displayed:

I think it says something that no fans of David Bowie or Ella Fitzgerald were similarly confused.

The second interaction - which occurred only once - began thusly:

In truth, I wasn't embarrassed at all. And "Simoné"? It turned out that what the customer wanted was a recording of "El Cóndor Pasa" by Simon & Garfunkel.

I felt like a genius when I figured it out. The customer thought I was an idiot.

Annie - Yes, I'd forgotten about the random non-book enquiries, like "Do you sell directors' chairs?" I suppose there was a connection, usually - you read in a chair and need a lamp to see.

Brian -Didn't Billy Joel used to be taken quite seriously in the pre-Uptown Girl era? Ditto Stevie Wonder. The 80s were a bad time for 70s music heroes.

When I was a manager, I probably spent too much time on the shop floor, but I liked to create the impression of being omnipresent, so I still got to deal with a lot of customers. I also remember how the really stupid ones were too dim to realise that they were in the wrong and yes, they looked at me as if I was the idiot. Happy days.

Like Andi in the Attic, I owe you and every other bookseller an apology. I try not to be dense, but I'm sure I've committed my share of faux pas. It's called distraction ... and lack of focus!

Hope you and your family will have a very happy new year! xoxox Carol

Can I tell you about the great review my cat got?

Carol - I don't think anyone minds a faux pas - I've made a few myself, much to the amusement of some customers.

Tim - In most cases, I like the review links and take pleasure in seeing someone's book do well. But there's one author who, although his book is already very successful, still feels the need to tweet links to every single positive customer review he gets on Amazon, which is a bit sad.

Steerforth, if you read people's Tweets, you are using Twitter. ;-) There's no rule that says you have to Tweet. Keep writing!

I suppose you're right. I've always felt like a 'lurker' - reading dozens of tweets every day, but rarely contributing any of my own. I admire the brevity of Twitter, but the 140 rule usually defeats me.

I had my mother, a retired librarian, read this post.
She laughed and then told a story about tracking down a book for a patron based on no other information but "blue with a dog on front."

They have produced a collection of "weird things customers say in bookshops" based on a blog. (Jen Campbell Published by Constable and Robinson.)
Someone looking for a book about this size to fit in the gap on the shelf. Very funny.

One of my favorites, related by a former student of mine who worked for as time at a huge book-o-plex: A woman had been watching Oprah; Oprah had recommended "East of Something, by, um, I can't remember the name, but he was a Jewish fellow." I think she quit and went to grad school that day (my former student, not the Oprah lady).

Cat - It's amazing how common those enquiries were. I think Google has made a huge difference, both in a positive way (booksellers can now type these random words into a search screen) and a negative (so can the customers, who don't need to visit bookshops any more to find the information).

Anon - Thanks for reminding me about this book. I read about it last year and then forgot all about it.

Chris - That's wonderful - "Jewish fellow" - I shall use that one!