In this post, I wrote about the issue of plagiarism versus coincidence.

Today, I came across another example: 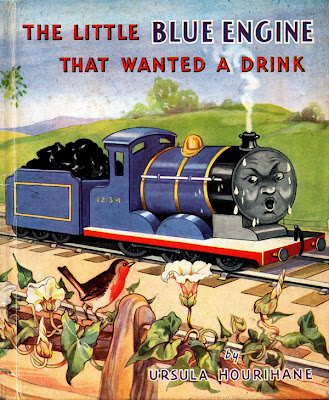 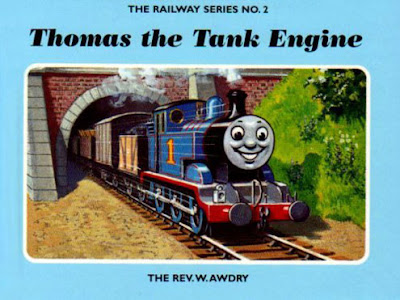 Is one of the most successful children's book franchises actually a shamless rip-off of a title by an obscure author?

Sadly, Miss Hourihane's book is undated, but after a little detective work it looks as if the illustrator, Rene Cloak, may have been inspired by a certain children's book about steam engines with faces, that was published a few years earlier.

The similarities with Thomas can't be a coincidence, can they? 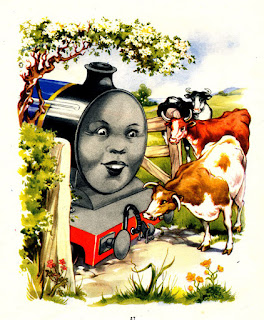 If only it was the other way round. I'd love to think that beneath his amiable exterior, the Rev. Awdry hid a dark, shameful secret, flinching at the mere mention of Ursula Hourihane's name.

On the other hand, it would also be fun to portray the elderly Miss Irene Mabel Cloke as a shameless plagiarist, who lived in fear of being exposed as the Railway books became increasingly popular.

Sadly, the truth is probably a lot duller. 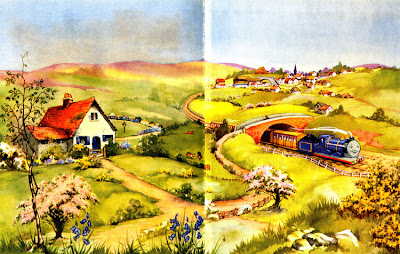 Posted by Steerforth at 1:48 pm

I’m opting for Hourihane and Cloak as shameless plagiarists and possibly the pawns of a ruthless publisher.

If the British Library catalogue is to be trusted then The Little Blue Engine Who Wanted A Drink appeared in 1953. Awdry kicked off in 1945 and was close to a new book every year as his series grew in popularity.

And what sort of a drink did the little engine want? Looks like the tears of a hopeless alcoholic to me.

You could be right. The engine does go out of control and end up in a field of cows. I suspect that the advent of diesel trains, buses and cars was partly to blame.

There was a similar situation with the helicopter 'created' by the Duchess of York. (Budgie, was it?) Apparently another helicopter predated it by quite a few years.

Let's not forget the great Harold Helicopter in the Rev. Awdry books. There was even a song with sheet music at the back of the book.

'Said Harold Helicopter to Percy "You are slow. Your wheels are out of date and you have not far to go..."

That's all I can remember. Sorry.

I suspect the little red engine from Walt Disney's 1941 Dumbo (herself the putative offspring of an earlier crawler from the Silly Symphonies) had many babies from romantic encounters with engines of various hues... wait... what gender are steam engines? Perhaps are the blue ones boys, and the red ones girls?

A harsh attempted slur on the innocent and saintly Revd Awdry, Steerforth. Here is an Uncle Albert ("During the war") moment from your - probably - most ancient correspondent. I was brought up from the egg on Thomas books. I mean we're talking 1949 and onwards here. During the early '70s when I was organizing a rather too ambitious Children's Book Fair for Blackwell's, Kaye and Ward, his publisher, amazed me by offering him for a personal appearance. I simply thought even then that he was no longer living. He turned out to be a a splendid man, pipe-smoking, silver-haired, gnarled and wise as only the Revd Awdry could be.

Ah, the good old days of bookselling. You get the Rev, I get Katie Price.

Thanks for your thoughts on this. It has been perplexing me since a recent second-hand book fair made The Adventures of the Little Blue Engine my 2 year old's favourite book.

Yes I'd rather hoped for the dramatic discovery of a poor ripped off female writer, but your argument is compelling.

The Little Blue Engine That Wanted A Drink is one of my favourite treasures from my childhood and I still have it. I have it on good authority that it was very new in Australia at the time of my birth (1954).
I had always hoped that Thomas was a rip-off of the Little Blue Engine but I have never found a reference to him prior to the 1953 that Peter mentioned.
The possibility always exists of course that the Little Blue Engine was plagiarised prior to it's publication. Who knows, there might have been illustrations or unpublished stories floating around for years before publication, as often happens.
There can be little doubt that one at, the very least, "influenced" the other and the above is the version I'm desperately clinging to.
Circumstantially, it seems so obvious that the Little Blue Engine is a copy of Thomas that, in such a conservative place as post-war Britain, it would surprise me if there wasn't a far more subtle explanation.
I wonder if Hourihane and Cloak were ever asked?

I distinctly remember my Father reading a Little Blue Engine story to me at bed-time; this would be 1955 (the year, not five to eight). The engine was parked overnight under a crab-apple tree and the apples fell into his funnel and choked his boiler so that the engineers could not light it in the morning.

The suggestion I have heard (from a good source) is that the little blue engine was the earlier of the two but when the next train arrived the publishers asked the same artist to illustrate it, hence the similar appearance.

Very interesting indeed. I would also like to point out that the little blue engine does share immense visual similarities with the Edward character from the railway books. just a small lil thing I noticed.

Is this serious or not?

Is this article serious or not? Can you explain?

Anonymous - I don't quite understand the question. The post is light-hearted, but if you're asking if I really found a book that's almost identical to the Rev. Awdry books, the answer is yes.

What I mean is, is the post really serious or is it a joke article? Like, I barely find info of the Ursala book online yet one would think scholars would already have noted the similarity.

If you want a book that the Rev Awdry could conceivably have been 'inspired' by, try the Little Red Engine books by Diana Ross (not that one), first published in 1940.