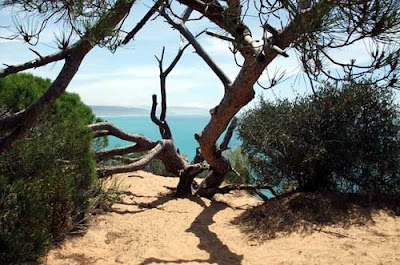 I have just returned from a week in Andalucia with my family and a friend of ours.

How and why we ended up taking a child who doesn't even like to go beyond our front door is a long story and I won't bore you with the details, except to say that our decision was a triumph of hope over experience (also, the deposit was non-refundable).

I booked the holiday months ago, in the naive belief that a week in a quiet, beautiful place might transform our son, restoring his faith in trying new experiences.

In a way, I was right. My son did undergo a transformation, but unfortunately it was from bad to worse. The one crumb of comfort is that it is much easier to restrain a 12-year-old than a teenager, so things could have been far grimmer.

During our stay we caught brief glimpses of the holiday we could have had - family trips to the beach, meals out and visits to historical towns - but sadly we were caught in a momentum that we couldn't control and ended up operating a shift system around our son.

In spite of everything, the holiday wasn't a complete disaster. The first night, spent on the rooftop of a Seville hotel, was a magical experience in which the spires of the largest cathedral in the world were complimented by a full moon, darting swallows, a rather nice Spanish beer and a naked woman hanging her washing out on the building opposite. Life doesn't get any better than that. 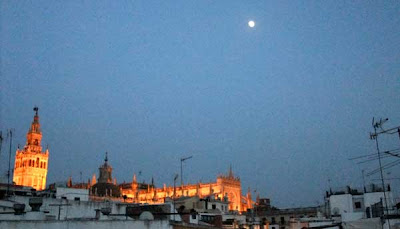 I also enjoyed my terrifying drive into the centre of Seville, during which an old man on a bicycle led me around a labyrinth of back streets that were barely wider than our car. Quite how I managed to reach our hotel without scratching the vehicle or crushing anyone's foot will remain a mystery.

Seville is apparently the hottest city in Europe and even at the beginning of June, the temperature reminded me of Death Valley. Kerbside tapas bars tried to alleviate the stifling heat with nebulising water spays, but they were no match for the thick stone walls of Seville Cathedral: 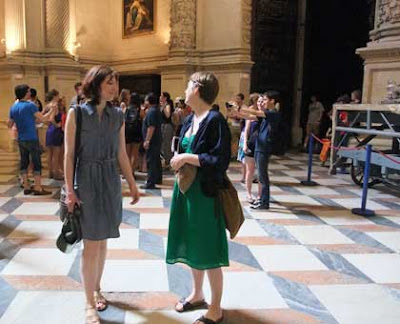 Mrs Steerforth and friend
The cathedral was awe-inspiring, but my favourite place was the stunning Royal Alcázar palace, with its Islamic-influenced architecture and breathtakingly beautiful gardens. We went in the evening, outside the normal tourist site opening hours and were able to experience the ethereal tranquility without having to jostle with coach parties of visitors: 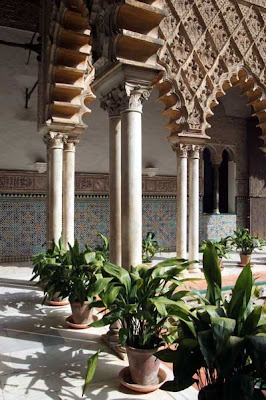 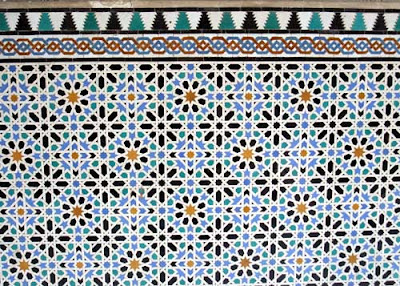 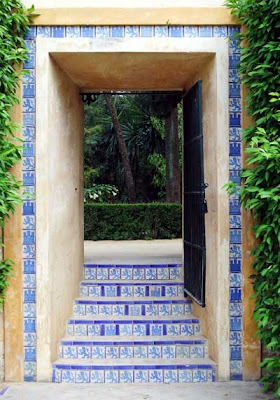 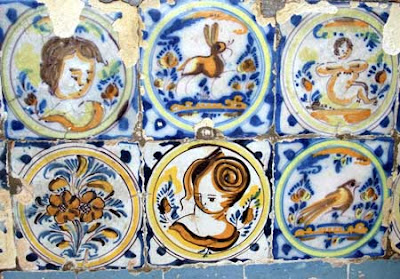 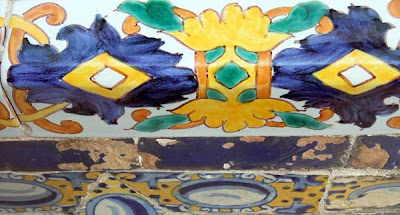 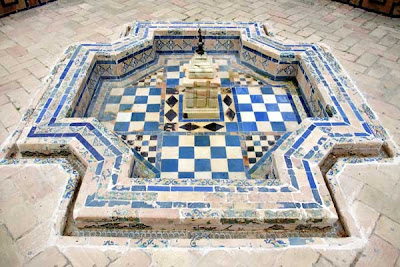 After a day in Seville, we drove down to Los Caños de Meca - a very pleasant seaside resort that is slightly spoiled by an excess of dog excrement and hippies (not the nice, eco-warrior ones, but the old, leather-skinned variety whose brains have been addled by four decades of marijuana), where we stayed in a German-owned modernist house.

With the exception of a bizarre trip to Gibraltar (which warrants a separate blog post), we didn't do an awful lot. My wife occasionally went running with the friend who'd bravely agreed to come on holiday with us, whilst my sons pottered around in the grounds of the house. I read a book about London and drank Cruzcampo.

In many ways, it was idyllic. The weather was perfect and the only sounds we could hear were of birds and the distant roar of the surf, but in spite of this (or because of this) both boys kept asking when they could go back to England. For them, paradise consisted of bad food, computer games and mild weather.

I have learned my lesson.
Posted by Steerforth at 9:29 am

One of my cousins, sent to France on exchange, said to his parents as he was about to board the plane, 'Why do I have to go to bloody abroad,' and then, according to the host family, spent the whole time under his bed with his transistor radio, tuned to test cricket, pressed against his ear. He didn't stay like that forever

Perhaps it's better to be that way, rather than spend 11 months of the year wishing that you were somewhere else.

At least you got some sun! Although I will be the first to complain it's too hot if it ever comes out again here, I'm missing blue skies.

Trefusis Minor hates abroad too. His best holiday ever was the Isle of Wight.
Sorry to hear that things were on the tricky side but also very glad that you managed to have a good holiday - beautiful photographs. We went to Spain a few years ago (many complaints from a very young TM about the inconvenience of Spanish mealtimes) and went to Granada & Cordoba but not Seville - I love moorish architecture and would love to go back.

Seville sounds lovely. I'm sorry your trip didn't accomplish what you hoped it would for your son, but you certainly get A for effort for trying. And who knows? It might make a difference to him, just in ways that are not yet made visible. Take care and God bless.

Annabel - Ridiculously, I started to yearn for grey skies after five days of blazing sunshine. Absurd, isn't it?

Helen - Yes, Moorish architecture is stunning. I remember catching my first glimpse of the Alhambra - it was a jaw-dropping moment and an elderly Frenchman just in front shouted "Ooh la la! C'est magnifique!". The intricacy of the Moorish word carving is impressive, but I love the tiles most of all.

Re: children - I should have realised by now that whilst we crave novelty, most children yearn for continuity. Mrs S and I have decided that child-free city breaks are the way ahead.

Carol - Thanks. I think the trip has certainly made a difference to our relationship with our son - we have finally accepted the reality of the situation, rather than cling on to false hopes. That sounds depressing, but it needn't be. The way ahead is, I think, to provide continuity, stability and security (and we're also going to a dog show in a couple of hours).

Seville is next on our list but we will go in the autumn or Spring. It can be extremely cold there in Winter too, which is why we chose Lanzarote with its year round warmth (no dog poo or leathery old hippies either). I'm so sorry your boys didn't enjoy the experience but I hope it doesn't it put you off trying again in the future.

You mentioned your Spanish plans in your answer to my comment on the previous entry - and I was wondering whether the Spanish trip was happening last week. God, you're all brave to have done this trip - your son too; how sad to be so scared of the world at his age and how sad for you to see him being like that... I'm glad you had some lovely experiences whilst you were there and I hope things get better and better. Quite a contrast - a dog-show in Lewes after a stroll through Seville... AnnaC

I think you hit the nail on the head with, "whilst we crave novelty, most children yearn for continuity."

Nell - I can see exactly why you chose Lanzarote - the heat there isn't enervating. I thought I was visiting Seville in the spring, but even June 1st must be too late in the year.

Anna - Yes, my son was very brave. For a while I even thought he was enjoying himself, but he lost it towards the end and we had an experience I never want to repeat. Fortunately, most of the holiday was relatively peaceful.

Martin - I'm trying to remember my own reaction to childhood holidays and I was probably bored too - only a few toys to play with, no friends and trips to dull places. It wasn't until adolescence that new experiences became exciting.

Yes, bravo for undertaking the trip and as one commenter said there may be good effects from the journey that havent showed up yet. And you and your wife got a change of view too. Beautiful photos.

Proof indeed that we are all different. Some of us love to travel and see new things, others love to stay at home and enjoy familiar surroundings.

Sounds like you have come to terms with your situation and identified a child-free solution to your love of travel.

Family holidays as a child were always marred by my brother's appalling behaviour.
Mum would spend most of her time stuck in the apartment or hotel trying to keep my brother 'off the boil' and maintain his routine, while dad and I would stay out until the early hours sampling local cuisine, wines and mingling with all manner of weird and wonderful people. Even when I was 7.

Sometimes it's enough to experience a moment, like the one you described on the rooftop. That'll stay with you.

Though I've never had a traumatic time taking the boys on holiday, I can't say I have had a great time away from home anywhere since becoming a mother.

I'm sure many will disagree, but I'm convinced that a REAL holiday would involve thinking about only yourself for a few days (before realising your own company is a bit boring, and getting back to 'reality').

Glad to hear you both managed to enjoy SOME of your holiday at least.

Sorry to hear about the episode you never want to repeat at the end though.

Suki - Yes, I think that the benefits are already beginning to show.

Sarah - And some of us like to travel but still see familiar surroundings, hence the attraction of Benidorm for some. Thank God for the people who like staying at home - the airports would be heaving otherwise!

Lucy - I completely agree with you. I really enjoy going away on my own for a few days. At first it feels like a liberation - the luxury of doing whatever you like - then I start to miss the constant "Daa-aaad" until, three days later, I'd given anything to be back in the organised chaos of family life. Absence definitely makes the heart grow fonder.

Laura - The dog show was very odd. I've never seen so many ugly people in one space (apart from Asda). Dare I join their ranks?

You are a brave parent. And what beautiful tiles!

That first dry picture reminds me of the setting of my own writing--there is a beauty, as your photo suggests, in a spare landscape that you can't find in a lush one.

I enjoy what you guys are usually up too.
This kind of clever work and coverage! Keep up the very good works guys I've added you guys to our blogroll.
My website :: catral