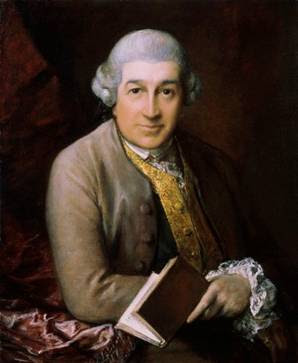 Before I bluffed my way into the world of secondhand bookselling, I naively assumed that the older a book was, the more valuable it might be.

How wrong I was. With a few notable exceptions, it's the 20th-century books that make any real money.

I suppose it's all to do with memory. Long-forgotten titles, that have slipped out of our collective cultural consciousness, can be very hard to sell and I've even had to throw some 18th-century books away.

Admittedly the books were very dull and in terrible condition. They couldn't even have graced the shelves of a provincial faux Ye Olde hotel, but it still really went against the grain to bin them as they'd been built to last.

As I tossed the books to their doom I thought of their long histories, from their auspicious debuts in the libraries of gentlemen like the one above, to their sad demise - 250 years later - in a skip on a drab industrial estate in Sussex, with Heart FM playing in the background.

From Haydn to Rihanna. It was just too awful to contemplate.

I'd kept the books for as long as possible, until my desk was surrounded by teetering piles. After a fruitless search for new owners, I realised that I was in danger of looking like one of those people who bottle their own urine because they won't throw anything away. In the end, the books had to go.

Yesterday I found another 18th-century book that will probably also be impossible to sell: 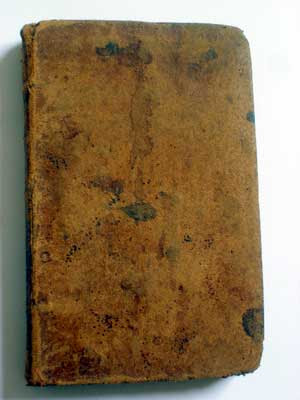 Perhaps it's even the book in Gainsborough's portrait, although I think it's highly unlikely that David Garrick would have owned a copy of this: 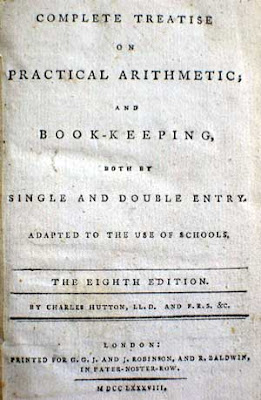 It sounds terribly dull, but in fact it's a box of delights, giving the reader a fascinating glimpse of late 18th-century society: 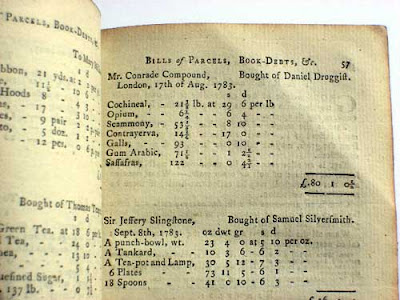 Over 6lb of opium? Nancy Reagan would be spinning in her grave (but apparently she's still alive).

In the same chapter, the author makes a few little jokes to allieviate the tedium of the subject matter, creating characters like Roger Retail, Thomas Teapot, Lady Strawberry and Ben Bibant. But my favourite part of the book is a section called 'Rules of Practice', which lists the sorts of things a gentleperson might buy:

Oh for the days when a gentleman could casually buy 54 acres of land! But I'm not sure about selling 15 pistols to an alcoholic drug addict. It would never happen today.

Other chapters concern vulgar fractions, promiscuous questions and evolution - maths was never this exciting when I was at school, but at least it was less complicated. I know that the media keep telling us that young people are getting progessively cleverer, but I'd like to see today's generation of hugging, halter-top-wearing GCSE students tackle this: 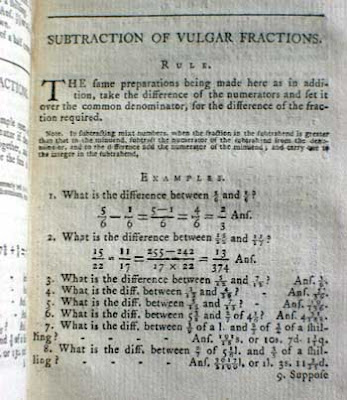 In fact, whenever I find a very old textbook, I feel humbled by its complexity. If I was transported back to a 1788 classroom, I'd be the one in the corner wearing a dunce's hat.

Were people cleverer then? No, of course not. Was the standard higher because the most stupid people were excluded from the education system? As the descendant of generations of barely literate Kentish peasants I'd naturally disagree, but I suspect that Messrs Cameron and Osborne might nod their heads in approbation.

I can't say that I have any great yearning to go back to the 18th century, but the prospect of wearing a wig and tricorn hat would appeal greatly. I would also enjoy throwing my silk gloves onto a shop counter and saying "Sir, I demand satisfaction!"
Posted by Steerforth at 3:59 pm

I want a firkin of soap for my birthday.

I wish someone would tell that to charity shops. They seem to think that anything 'old' is worth a small fortune.

Kid - It's awful isn't it. Someone in the charity shop world twigged that they were massively underpricing certain items, so they reacted by ovepricing everything.

Camilla - Someone's offered £75, but they're a dealer so they obviously have a big mark-up planned. I said no.

Oh, I was just thinking I'd take it off your hands if you couldn't find a buyer. My dad (retired accountant and history lover) would find it fascinating. But if £75's too low then I don't think I'm your customer.

But if you do ever get to the stage again of contemplating binning C18 books, let me know.

Blast. My current financial status is composed largely of vulgar fractions (obviously I ordered far too many acres of cheese last time), so I can't put my hand up for the 18th century maths and bookkeeping lessons. What a great book though! I do love the insights old books give into daily life in the past.

Old cookbooks too - I had a look at Apicius the other day, after we'd been to a Roman festival thing in Xanten and eaten some Roman-style food, and it was fascinating (also, admittedly, sometimes a little stomach churning!).

I can't say that I have any great yearning to go back to the 18th century, but the prospect of wearing a wig and tricorn hat would appeal greatly. I would also enjoy throwing my silk gloves onto a shop counter and saying "Sir, I demand satisfaction!"

Gentlemen- the only people allowed to duel- didn't challenge shopkeepers to duels. They didn't feel obliged to pay them either.
The eighteenth century gentleman may have needed the opium becuase it was the only pain-killer available and the state of medicine and dentistry meant he had a lot of pain to kill.

A friend of mine has been dealing in secondhand books for many years. She used to trawl the charity shops for stock. As you say, someone twigged, and now some shops are more expensive than buying from her.

Yes, but... if you did go back to the 18th century, you'd probably not be flinging silk gloves around so much as living on mud and turnip peelings.

It's a nice idea going back into history if you can be part of the 1% of the time, but the odds are against you really.

(I agree with you that the very idea of throwing away an old book feels wrong. If they must be disposed of I think they ought to be buried - or find someone with an old attic and put them there to gather dust for another century or so.)

Sir/Madam - Are you calling my extensive knowledge of the 18th century into question? You are a pedant! *Throws gloves onto counter* I demand satisfaction.

Cal - £75 is a lot, but a little when you know that someone will be selling it on for a considerable mark-up.

Camilla - I had a similar exerience last year. The wild boar burgers were lovely, buy most of the food made me feel slightly ill. Now that we no longer have to eat hearts, tongues and kidneys, they seem far too rich. I suppose people will feel the same way about all meat in the future.

David - I used to say the same thing to my dad, who entertained a secret fantasy that he was the reincarnation of an 18th century gentleman. If we're going to spoil the fantasy with a sour note of realism, I should add that it's pretty unlikely that I would have made it to adulthood.

I often think about the millions of lives that never were, including the Shakespeares, Beethovens and Rembrandts whose lives were claimed by disease and illness before they had the chance to achieve their potential.

I believe they accept everything.

This age/value thing has always puzzled me. Why are 2000 year old Roman oil lamps worth a fraction of a grotesque plastic 1960's table lamp? Why is Justin Bieber's autograph worth 100 times that of Charles Dickens? Why oh Why?

We could open a debate on the question of worth I suppose. Something is only worth a certain amount if someone is prepared to pay that amount. This is why the price of rare books, paintings etc. have escalated in modern times. There are far too many rich people with more money than sense who have pushed up the prices. BTW who is the charming be-wigged gentleman in the picture?

It’s all right I googled him - David Garrick. Now I understand your reference to him owning that book.

Ah yes, the 18th Century. Well, as you say, the clothes were wonderful. I'd love to wear a dress that actually allowed me to twitch my hem and flounce -- not easy to do in a pair of crop pants and a tee shirt! But of course I would want to be the Lady of the Manor, not one of the 'tween maids (a far more likely proposition!).

Thanks Luis - a very good idea. Ever the pessimist, I worry that our digitised culture will disappear in a puff of smoke one day, so an archive for real books can only be a good thing.

Rog - It's bizarre isn't it. I sold a tatty 1950s hardback of 'The Creature From the Black Lagoon' for £500 to someone in New York, but had to bin an early, leatherbound edition of Tennyson because it had no market value.

Nell - It's all about market forces and nothing to do with quality. One of the most chilling things I heard recently was that cancer drugs are "priced at a level that the market will bear".

Carol - They certainly looked good in those clothes, but I dread to think what they smelled like!

A very good point, Steerforth. Some wit once pointed out that when laundry was difficult if not next to impossible, the clothes were elaborate and multi-layered. Now that we have automatic washers and dryers and washing clothes is relatively easy, we all wear tee shirts and jeans. Go figure ....

You couldn't put an enormous multi-layered early 19th century dress with a ton of frills and embroidered bits in the washing machine, though.

I used to delight in finding any old book, no matter the subject or condition. Junk or antique shops often would have a few shelves or boxes of books where a pearl might be found. I am a recovering bookaholic, so I try not to trawl for such things any more. But couldn't you sell a box of them to a curiousity shop somewhere, rather than ditch them? Sell them by the pound if you must (weight, not currency)!

You sir - are clearly trying to increase the value of the stock for your exclusive market by dumping those items which you could not bear to release to an appreciative prole for a mere 5 pounds, and cannot stand the thought of another bookseller stealing a march by perhaps buying one of these volumes and achieving what you sir could not - generating an appreciation.

Get some good marketing advice and establish a different brand to market these volumes - for goodness sake!

Anon - I didn't have time to think about marketing and brands, but did manage to find an antiquarian bookseller who was very happy to buy the stock off me for a resaonable price. The best of the stock was sold in his shops (for a handsome mark-up), the worst went to furnish the atriums and receptions of country hotels.