The View From My Door

I've moved to a new workplace. I think I'm going to like it: 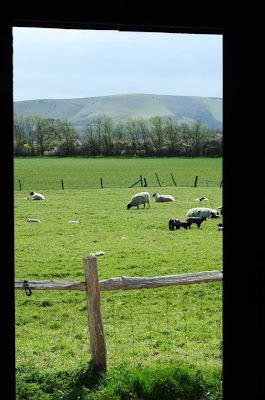 When I was younger, standing on windswept suburban platforms, watching trains full of exhausted people make their way back to the less fashionable parts of London, I used to dream of escaping to the countryside.

But instead, I moved to a small, affluent London suburb that had been picked up and dropped in the middle of the Sussex Downs at some unspecified point in the past. The dinner parties with people from Stoke Newington continued unabated, but without the absurdly long bus rides (or the nocturnal cab journeys, driven by someone who had only just arrived in Britain) between places that were only a few miles apart.

It was the perfect solution. I could see the countryside in the distance, but wasn't obliged to engage with it in any way.

However, during the last few months I have spent a lot of time on farms and have grown to love the silence and remoteness. Ridiculously, I didn't know how much countryside there was. My journeys along arterial main roads hadn't exposed me to the vast interior of the Weald, where it is still possible to escape from light pollution and the distant roar of traffic.

I love the fact that I can be sitting in an office, connected to the internet, but all I can hear is the sound of sheep, cows and birds.

Last week I was sitting at my desk, answering some emails, when a sheep came up to my window and stared at me for three minutes. I tried waving and flapping my arms around to get a reaction, but it continued to look me calmly in the eye, with a uniquely ovine insouciance. In the end, I was rescued by the distraction of some gamboling lambs.

I'm sure that my rural idyll will seem less appealing in December, but at the moment I feel as if all of those hours spent at Clapham Junction and countless bus stops, have finally been rewarded.
Posted by Steerforth at 3:56 pm

I hope you're not a fellow hayfever sufferer? Seriously though, this has to beat sharing your personal space with a smelly oaf who rolled out of bed and jumped on a train without brushing his teeth.

“ovine insouciance” - how wonderful. No sheep here, so I suppose we have caprine indifference - and they don’t gambol!

Where we live, is a stop-gap solution that turned into a 12 year love affair. I can't imagine living in a city, again. This was my antidote. Now it's an essential part of my diet. You may well find that, by December, you'll also be 'hooked' for good.

You have the right idea ... I spend a fair part of each year in the Highlands, an old croft settled into a hillside with the loch 5 minutes walk away and not infrequently I raise my head to see a sheep looking in the window. Why ever not?

Reading this in a cubicle and trying not to hate you... Enjoy it for those of us still in captivity!

It looks like the edge of the Welsh Hills - are you sure you haven't joined the Hay-on-Wye gang?

My first job was in Hackney which was why I was so attracted to my second job which had a Norfolk river flowing past the factory with my fibre glass rowing boat tied up for lunch time excursions.

An anchor to some kind of remoteness is nice, indeed. I live in a suburb among other suburbs not far from a big city and there are no sheep and no stretches of rolling green to speak of, but my house is in the back of the neighborhood with its own back to a very long but narrow stretch of woods. It's quiet and when my dog and I go for strolls in the deep gully created by the small creek that runs the length of the woods, we almost feel like we have escaped...at least I do. I shouldn't speak for her.

Good for you! The view from your doorway is lovely. If I were a painter, I would paint it.

Thanks for sharing. Take care and God bless, Carol

Lucy - I am, big time. When I was given a skin test for pollen allergies, a tiny prick to the skin sent me into toxic shock and I spent four days in a hospital bed! I shall keep taking the tablets.

Nell - I'm a big fan of goats. They may not gambol, but they do eat bus tickets.

Martin - I can see it happening too. The silence is addictive.

Anne - That sounds idyllic. I have a fantasy of living in splendid isolation, a little like 'Ring of Bright Water', minus the otter.

Séamas - My home is barely larger than a cubicle, so I'm just living back to front.

Rog - It does look a bit like Wales, but the local villages have vowels and there are fewer pubs and graveyards.

Chris - It sounds lovely, but for some reason the words suburb, woods, gully and creek make me think of a Stephen King film. I think I watched too much late night television in my teens.

Carol - Thanks. I'd love to paint the Downs too, although my sheep would probably look more like low-lying clouds.

Now I think of it, I have really never used the word "gully" before.
But I guess that's what it is...

I love this post, and I just wanted to say, "Oh oh, me too!" Well, minus the sheep, at least. I have birds though, which I can see criss-crossing my garden from my office window. A couple of weeks ago, a pair of sparrow-hawks were courting in the field next door. There is also an abundance of silence here, broken only by the occasional passing tractor or one of the horses in the field behind us shouting a greeting as someone rides past in the lane.

I flipping love it :D I wish you much enjoyment from your bucolic surroundings!