A Man With a Van

I am a broken man, crushed by the ordeal of physical labour. I don't suppose that I've done anything out of the ordinary - thousands of people load and unload vans every day - but it has been a shock after seven months of relative indolence.

I won't bore you with the details, except to say that I have been moving some furniture for someone over the last couple of weeks, driving a large van that has 166,000 miles on the clock and a suspension that amplifies the tiniest piece of grit on the road into something that resembles artillery fire at Stalingrad.

I'd burned some CDs of Radio Four podcasts to relieve the tedium of motorway driving, but even at full volume, Andrew Marr couldn't compete with the constant squeaking and rattling of metal parts trying to separate. I hadn't heard metal make noises like that since Das Boot.

The nadir came when the wipers stopped working during a flash flood on the M23 and the view ahead turned into a pointillist landscape of greys and dark greens. I took the first exit I could find and stopped at a layby, where I texted Bob, the van's owner: "Coming back. Wipers not working."

20 seconds later, my phone buzzed with a new text message: "Is it raining?"

In fairness to Bob, he fixed the fault quite promptly, swapping the broken fuse for the windscreen wipers with the one that operated the indicators. It was a novel solution, but I would have preferred to have been warned, as the honking and v-signs were making me quite paranoid. 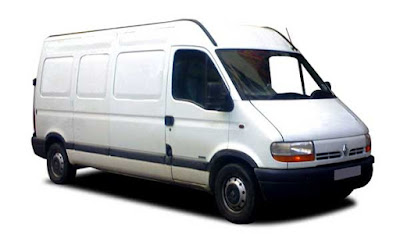 The next day I did my last job for Bob, who gallantly provided me with a man who could stick his arm out of the window if I wished to turn left. Fortunately, the route was only six miles long and quite direct, so neither of us were required to perform any hand signals.

It looked as if everything was going to be all right after all. Sadly, at the final destination, I miscalculated the angle I needed to reverse into someone's drive and ended up getting stuck in the middle of their lawn. It took an hour to free the van from the quagmire I'd created and as we crept forward, it revealed a scene of desolation that reminded me of the Somme. I felt awful.

I'm not quite sure how I ended up agreeing to work for Bob. I think it was something to do with the mindset that comes with being self-employed, feeling obliged to say yes to any opportunity that comes along, regardless of how suitable it is.

But perhaps I also just liked the idea of driving a very big van.
Posted by Steerforth at 3:29 pm

Email ThisBlogThis!Share to TwitterShare to FacebookShare to Pinterest
Labels: self-employment

What an ordeal, brings a whole new meaning to 'Bob-a-job'. One good thing about such disastrous jaunts is the excellent blogging material they make.
I was lost in Reading once on a hot, dusty day, and ran out of screen wash. I didn't know how to open the bonnet (wasn't my car) so had to keep stopping to clean the windscreen with baby wipes.
It took me a lot longer than you to see the humour in the situation.

Lost in Reading? It's easily done and yes, I've used baby wipes for the windscreen too, but mine had some sort of aloe vera-type additive that created a horrible smear.

I think I secretly enjoyed driving a big van and exchanging thumbs-ups with other van drivers as it was such a departure from my normal life. I even ate a scotch egg to get into the mood (but forgot to buy The Sun).

That sounds like quite an adventure. My thirst for adventure in and among the normal commitments and unchangeable facts of my life has led me into some 'interesting' and funny-once-recounted stories. Doing stuff that takes you outside your usual life is great!

I too have had a period of saying yes to every opportunity that came along, but this was in my personal
life in the wake of my divorce. I met some strange and wonderful people, forsook my need for sleep far too frequently, had some very loooong evenings in situations where I felt wholly inadequate and enjoyed some utterly unrepeatably, wonderfully memorable opportunities to share with others. Looking back, I am really glad I did as I learned an awful lot about what works for me and what doesn't :) And hey, if driving a big van makes you happy then go for it ;-)

Pinky, I agree. If you remain open to new ideas and opportunities, you'll continue to grow as a person rather than stagnate. Even something as simple as driving a big van can be refreshing, challenging the idea you have of yourself as a certain type of person.

It sounds as if you responded to your divorce in a very positive, life-enhancing way, which must have taken a lot of courage.

While I was studying with the OU, I drove a LGV for nine years. It's almost impossible to avoid a few minor catastrophes, when handling a large vehicle. You'll be relieved to know, you probably got off lightly.

Here's to better times on the van driving front. Oh, and don't worry, consuming scotch eggs and purchasing a copy of 'The Sun', are not prerequisites for all drivers of large vehicles.

In the 'old' days (when petrol was 3/6 a gallon - aargh, Jim Lad) we used to wrap foil from cigarette packets around the fuse, refit and continue. These days I wouldn't know where to find most fuseboxes.

My husband once replaced a broken fan belt with a pair of my tights. It worked -- but not very well. However, the jury-rigged solution did get us out of the layby, off the motorway, and into a garage.

A rep I used to know ( still know) used to carry a potato in his car boot for just such an emergency. Cut the potato in half and wipe it on the windscreen and the starch that is released is supposed to keep the screen free of water.

Foxes - What nonsense is that? Even the worst cryptic crosswords give a clue.

Jonathan - Yet another example of the wisdom of reps. That wonderful oral tradition will soon be lost.

Chickadee - Was the fan belt really broken or was it just a cunning ruse by your husband?

Clive - It feels as if you need a degree in computer science to repair a car these days. My local garage have solemn-looking men who run 'diagnostics'.

3/6 a gallon? That is going back! However, I do remember the outrage when a gallon passed the £ barrier.

Martin - Yes, they are unavoidable and I marvel at the manoeuvres that HGV drivers manage to perform in relatively enclosed spaces. I drove the van through Lewes the other day, as I thought my son might enjoy a ride. Never again. The medieval streets weren't designed for two cars, let alone vans.

I think the fan belt was broken for real....we'd been married about five years at the time!

I won't even attempt to explain how that happened...