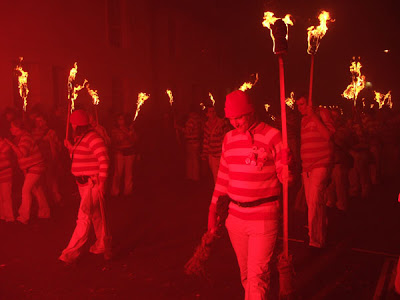 I'm feeling a little fragile today, as I celebrated November 5th at my next door neighbours' house and whenever I go there, things always get out of hand. I don't know how much I had to drink, but at some point in the evening I became an expert on subjects as diverse as French history and Arcade Fire.

Luckily I think I got away with it.

Our party included a French woman and a Canadian girl who had never seen the famous Lewes bonfire procession before, so we tried to prepare them for some of the more bizarre aspects of the evening.

Last year my neighbour forgot to warn a visitor - a black South African - that the parade included some local people 'blacked-up' and dressed as Zulus. She said that it was a slightly uncomfortable moment, but luckily he was more bemused than horrified.

It's estimated that every November 5th, the town's population swells from 16,000 to 60,000, much to the annoyance of many locals. However, there is a quieter part of Lewes where the crowds are bearable.

Here's a short video that I took last night:

The next video, which I didn't take, gives a much better idea of the scale of the crowds and the wonderful sense of anarchy that pervades the town:

I think there was an attempt, a few years ago, to address the obvious health and safety issues, but officials gave up in despair. However, beyond the facade of chaos and pyromania, there are plenty of people on hand - from St John's Ambulance volunteers to plain-clothes police officers - to ensure that the public are safe.

According to the BBC, last night there were 15 arrests and 170 injuries, only two of which were serious (and not caused by fireworks).

Apparently it used to be a lot worse before the 1850s. I wonder why things changed?
Posted by Steerforth at 2:41 pm

It's many years since I went to Lewes on bonfire night. It's a fantastic spectacle - glad you enjoyed yourself.

I think both videos are the same...

They were the same, but I've now fixed it.

You obviously do things in style, in Lewes. We watched a display on Southampton Water. No parades and one bolt-on, tacky funfair to avoid at all costs. Nevertheless, superb fireworks.

New Year's Eve in Germany is quite similar. Before I moved here I had the idea that the event would be slightly sombre, but I arrived at around 11.54 to what can only be described as slightly controlled anarchy as fireworks zipped past my head from every direction. Not a copper in sight, and I promptly revised my understanding of German culture. (Also I am a huge fan of the blog and hope the book-selling does work. I'm too cautious to do such a thing myself, but it is my dream life).

Martin - I think every town should have a parade, but the fireworks must have looked spectacular over the water.

Paul - Oddly enough, I was thinking about German cultural stereotypes a few hours ago and how odd it seemed that they have no speed limit on the autobahnen. It's interesting how most of us rely on the comfort zone of labels and stereotypes - reserved English, passionate Irish, prudent Scots etc.

'... but at some point in the evening I became an expert on subjects as diverse as French history and Arcade Fire...' - so funny. Did you also, as I usually do in such circumstances, wake up at 3 in the morning and regret it all?

It's usually 4.00am for me: a trip to the loo followed by an hour of my brain replaying a 'greatest hits' compilation of my most idiotic remarks.

The good thing about last night was that I don't think anyone will remember a word I said.

I read that initially as "prurient Scots", oo-er.

We must all descend on Lewes next year - makes the meagre budget set aside for colourful explosives in my town look incredibly embarrassing.Speaking of which, any remotely outlandish, inppropriate, drunken comments made by others would be completely overshadowed by mine. Try pretending you ARE French and convincing passers-by you're a stand up comedian (or 'comedienne' in my case, of course).
The deadpan facial expressions I'm met with haunt me in the early hours for weeks after.
November already sounds loads better than October.

I hate those deadpan expressions. I stick my neck out, trying to say something amusing to get the conversation flowing and people who've hardly uttered a word all evening give me a simpering, superior look.

Yes, descend on Lewes! Your liver won't thank you, but you, Mr Lucy and your boys would love it.

I detest 'mob anarchy' of any description. It usually means the selfish indulgence of a group of people who have no consideration for the peace and quiet of others.

Ban all such marches is what I say. (Bah! Humbug!)

Sounds fun! A bit of good-natured anarchy is essential, imo, so that the population remembers not to get cowed down and controlled by the nanny state.

In both the Netherlands and Belgium there are fireworks on New Year's Eve, and for weeks beforehand there are the odd occasional suspicious bangs from people who *just can't wait*. Everyone buys their own fireworks - there is a sort of amnesty on possessing banging and popping things for the purpose.

The night itself is amazing, particularly if you live in a small town - we stand outside and it doesn't matter in which direction we turn, there's something lovely to look at. For one night a year, I don't mind the noise at all. (The Beach Party in August however, is another matter...)

I don't think there are many arrangements made for OHS reasons, except perhaps in the central market places. Since most people set their fireworks off from their own gardens, it would be impossible to keep an eye on everyone. You just have to count on people's common sense. I haven't heard many stories of injuries.

Glad you had a good time! I'm sure you were consummately witty and incisive with your conversation ;)

'She said that it was a slightly uncomfortable moment, but luckily he was more bemused than horrified.'

That reminds me of the Fireball Ceremony in Stonehaven on Hogmanay. Surely the 15 arrests and all the injuries weren't just in Lewes?

Kid - Normally I'd agree, but what I liked about the Lewes Bonfire is that it's a cathartic day of anarchy, surrounded by 364 days of good manners, peace and quiet. It may be a mob, but it's a middle class mob who apologise when you bump into them.

Sarah - I agree. That's why I value tradition - it's a bastion against the ephemeral but powerful forces of governments and corporations.

Camilla - When I was 12, I spent New Year's Eve in Rotterdam with some friends and I remember how fantastic the fireworks were. By the time I left London, ten years ago, it was normal to see rockets in the sky as Big Ben struck 12.00.

Suze - I know what you mean, but in this case I don't think he was horrified, as he'd been to Lewes several times and knew that it wasn't a hotbed of bigotry. On the face of it, the Lewes Bonfire is horrifying: they burn the Pope, dress up as Zulus and set fire to effigies of politicians and celebrities!

But this is the most tolerant, open-minded, liberal places I've ever lived in. It's a strange dichotomy.

Christine - Given the amount of alcohol consumed, I'd say that 15 arrests of of 60,000 people wasn't bad. As for the injuries, the only serious ones resulted from falls - a possible result of alcohol consumption and topographical ignorance ;)

It all sounds wonderfully arcane, and I'd love to see it one year... however (and here I have a confession to make), part of my job is health & safety, and thus it does make me slightly uneasy - however the good record speaks for itself.

Maybe time to change this event to an Occupy.

Great videos -- but it was a little startling that the first music I heard was:

Chickadee - It's an ecclectic selection. The following tune was Israel's winning Eurovision Song Contest entry for 1978.

Annabel - I've been on several H&S training courses and I have nothing but respect for the so-called 'killjoys' who stop people casually maiming or killing themselves, although I wonder if fatal accidents resulting from stupidity are an important component of natural selection.

By the way, Canadian Chickadee - it might be known in your neck of the woods as the 'Marines' Hymn', but it's actually the Gendarmes' Duet by Offenbach, which became a bit hit in Victorian Britain.

Canadian Chickadee said...
This comment has been removed by the author.
12:22 am

I wasn't upset by the selection, but charmed. So many times all you hear is bad stuff about the USA, so I thought it was neat to hear it when people aren't throwing rocks at the Stars & Stripes.

Philistine that I am, I didn't realize it was actually by Offenbach.

I must admit, I thought that it was by Gilbert and Sullivan, because I'd seen men dressed up as Victorian policman singing "We run them in, we run them in..."

I had no idea about Offenbach or the marines.

Yes, it does sound as if it could've been by Gilbert and Sullivan, doesn't it? I love their work. There used to a Seattle G&S Society that put on their operettas. The group was semi-professional -- didn't pay enough so that the participants could give up their day jobs, but still really good. They did all sorts of things: not just HMS Pinafore, but lesser known ones like Iolanthe and Ruddigore. I don't know if they're still in existence or not. I haven't heard anything about them for ages.