I am now selling antiques.

I'm not quite sure how this happened, but an earlier joke about becoming the Lovejoy of bookselling has turned out to be remarkably prescient. 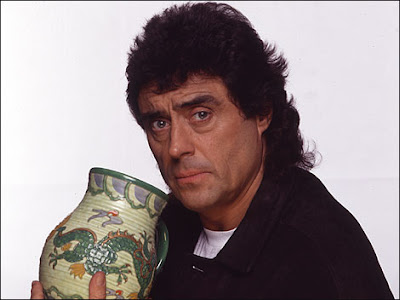 (I read somewhere that Lovejoy has been shown in 127 countries, however if you are from Iran and haven't seen the pirated Farsi-dubbed DVDs, I should explain that he is a fashion icon and widely-respected specialist in antiquties, whose chaste courtship with a woman called Lady Jane would surely appeal to even the most conservative clerics.)

I fully intended to stick to books - that's what I know about - but when I saw a set of Edwardian chairs on sale for £40 on eBay, I couldn't resist and made a winning bid, with only seconds to go.

I wish the chairs weren't in Devon - 320 miles seems a long way to travel in one day, but I'm convinced that I can make a decent mark-up if I ensure that the chairs are well-photographed and the auction ends on a weekend evening (when many potential buyers will have had a few drinks).

Even if I don't make any money, the chairs will have served their purpose by making me realise that there's no earthly reason why I have to stick to books. I can sell anything I like, as long as I make a profit.

Indeed, earlier in the week, I contemplated emailing the person who's designing my logo and getting them to scrap the word 'books'.

But just as I was losing any faith in getting some stock, the phone rang. It was a man who'd just seen an advert I'd placed in a local paper: would I be interested in buying some military history books?

I scribbled down the address and agreed to drive over the following morning.

The next day, as I rang the bell of a stranger's house in a town I'd never been to before, I wondered what to expect. An older man opened the door and asked me to remove my shoes and go upstairs. I quickly checked the number to make sure that I had the right house (after an embarrassing incident where I unwittingly turned up to someone else's massage appointment).

It was the right place.

I was led into a bedroom which, to my relief, had several boxes of books. My heart sank when I saw a pile of short story anthologies (they're impossible to sell), but some of the other titles were more promising.

I'd been worrying about how to agree on a price - I hate haggling - and made what I thought was a fair offer. He accepted it immediately, which made me wonder if I could have got away with less. But although I need to make a living, I don't want to rip people off. There has to be an honourable compromise.

I now have 38 books, plus a kind donation from the Poet Laura-eate, bringing the total inventory to 42 titles. That's about 0.5% of the total I need to achieve what my old boss James Heneage always used to refer to as 'critical mass'.

It's going to be a long, hard slog.
Posted by Steerforth at 9:34 pm

I feel I need to know more about 'critical mass'.

Talking of honour, you need to work out in advance what you'll do when faced with a situation as in Nick Hornby's High Fidelity, when a vengeful wife/partner happily sells off her other half's prized record collection for a fiver or thereabouts.

As for critical mass, for civilians it's when you run out of shelf space - not sure if that applies to booksellers, though.

I sense an adventure, ahead.

Hello Mr Steerforth - Martin has pointed me at your current post and I was delighted to see you have performed a special tribute to my good self.
As a self employed antique and collectibles person (but not dabbling too much in furniture) I salute your endeavours and will add your esteemed digital organ to my discrete and highly acclaimed blogroll.

You’ll get there. This is just the beginning. On the Ebay furniture front, had you thought of getting someone to deliver rather than you going and fetching? Just before we came to Lanzarote to live I got into Ebay in a big way as there was a lot of ‘stuff’ to get rid of. Also I wanted to buy old G Plan pieces to bring with us. On several occasions I used a Man With a Van as it saved money and time. Some of them are very reasonable and if you can wait until they are coming your way with a load anyway, it’s worth it.

According to The Times today there’s going to be a big Bonfire Night event in Lewes tonight. We don’t get those in Lanz.

I buy short story anthologies. Occasionally. Sometimes, I even get as far as reading them.

By the way, I'm looking forward to following your story as you 'grow' the business. Sorry, I couldn't really help myself. (Go figure)

Jonathan - the first time I heard James H talk about a critical mass, I thought he was refering to his Catholicism. However, I later learned that it was all about being big enough to survive.

MikeP - That would be an ethical dilemma. I suppose a true Lovejoy would sleep with the vengeful wife, then try to negotiate an additional discount, whereas I'd probably end up giving free marriage guidance and leave without any books. Maybe I'm not suited to this.

Martin - An adventure. Yes, I prefer that word to struggle, or huge mistake.

Rog - I've just visited your excellent blog. Re: your recent post, either I'm getting old too, or Radio Four really is losing it.

Nell - Yes, Lewes is like Stalingrad today - a health and safety officer's worst nightmare. I love it. I'm just popping next door for a drink or two before going to the procession.

I'll bear the man with a van plan in mind. It's an excellent idea.

zmkc - Oh, don't get me started. Go figure is fine when the author's American (when I say fine, I mean excusable), but it sounds absurd and incongruous anywhere else.

Continuing the grumpy theme, when I commented on your post I forgot to add the increasing use of "I'm good thanks."

As you use the internet all the time you might be interested in changing your home page to one which pays you money (and is free to use)?

It's a really nifty concept, and could help you out if things are slow. I wrote a blog post outlining the basics here http://www.sarahhague.com/2011/11/cunning-plan.html

If you like the idea, let me know and I'll send you more info.

Slog? Sounds like heaven to me - meeting weird and perhaps (once in a blue moon) 'wonderful' people.
You DO NOT have to like someone to take their money. Go as low as you dare and work up, you can always plead ignorance.

This whole Lovejoy thing has reminded me of some great names; the guy I nannied for had a friend, his name wad Love Bhabubta, his daughters; Alpha Poisson, Beta, and Omega. I have been drinking, but I kid you not.

Why are my comments always off point? Sorry.

Glad you're back with funny book stories, here's to many more...

Lucy - I bet I've had more to drink than you. Your comments always make perfect sense to me.

Sarah - This looks promising. I shall investigate further.

Do you think you'll ship to Canada? We'd love to support Steerforth Books and Bobs (although I'm afraid the Edwardian chairs might not be an option for us).

Hurrah! It's just the beginning. Your whimsical foray into the chairs seems very promising to me in terms of removing prior limits and opening up possibilities. I don't think it's terribly relevant whether it makes practical sense, I think you're going to feel your way very nicely. I also want to know what a critical mass of books is for a bookseller.

Biscuit - I will certainly ship to Canada. I only wish I could find an excuse to deliver the books by hand!

mtFF - I've discovered that the one problem with dabbling in antiques is that you end up buying things for yourself.