This morning, I took my younger son to a rather strange open air museum of industrial archaeology which, given its mostly odd-looking visitors and large collection of redundant machinery, felt like some sort of post-apocalyptic settlement. I liked it.

However, on the way there, I passed somewhere that was far superior in the post-apocalyptic stakes: Shoreham Cement Works. Closed in 1991, the works consist of two huge abandoned factories that look like something out of Tarkovsky's masterpiece, Stalker.

On the western side of a road that cuts through the works, there is an abandoned office building: 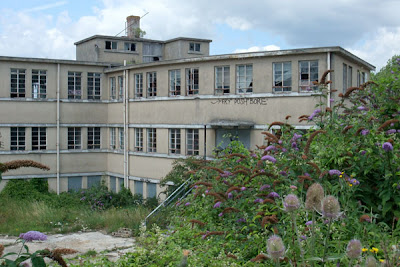 As you can see, there is some writing on the wall under the top row of windows: 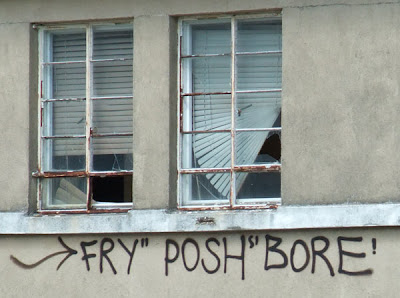 Why would somebody go to the effort of breaking into an abandoned factory next to a rural minor road, just so that they could paint an anti-Stephen Fry slogan?

I know that Fry's status as a 'national treasure' isn't universally accepted, but this seems a rather strange form of protest. The only suspect that springs to mind - Simon Gray - died three years ago.

Also, haven't they heard of Twitter? Stephen Fry certainly has. 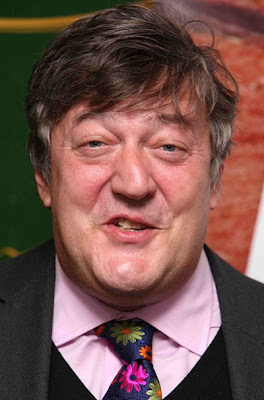 Posted by Steerforth at 1:58 pm

One to submit to http://www.picturesofwalls.com/

The writer and journalist, Ian Skidmore, says, "I object to the way he (Stephen Fry) uses knowledge as a bicycle to demonstrate how well he rides." Though, I can't imagine he can be held responsible for this sample of graffiti.

I'm with Karen. It could be any posh bore (Brian Sewell? David Cameron?) who, in the opinion of the artist, deserves the electric chair.

As a verb it sounds like a cryptic crossword clue.

I have submitted the photo to picturesofwalls.com (a great site).

I can see Skidmore's point. I'm not anti-Fry, but I think he spreads himself around too much. He hasn't produced anything that I'm convinced will outlive him. Like Peter Ustinov, he's in danger of being the great chatshow guest whose novels go out of print after his death.

The flowing arrow, the oddly spaced (unnecessary?) quotation marks and the tiny exclamation mark add to the intrigue.

Great admirer of Stephen Fry. Posh Spice? Not so much.

Yes, an oddly mild protest considering the trouble it took to make.

And why is posh in quotes? Is Fry's poshness being questioned?

Closed cement factories are fascinating. I recall a gigantic "sementfabrikk" that closed in southern Norway located just along a well-traveled highway. It was like driving through a Batman movie set. Haunting place.

Hmm. Interesting. Is a posh bore worse than some other kind of bore? And what about boors, posh or otherwise?
Yes, definitely an intriguing thought.
Canadian Chickadee

I would have thought it's abundantly obvious that a reader of your blog is commenting on Herbert's annual in the previous post, just where you could be expected to see the commentary!

After all, the back cover featured 'Fry' drinking chocolate and the annual was definitely something of a posh bore ...

So funny. I imagine Queensbury painting "Wilde posing as a somdomite" on the exterior of a cement factory.
p.s. or was it "Wilde a posing somdomite"(?) - which is even closer to the Fry graffito and equally ambiguous

Possibly a reference to Barry Fry the opinionated chairman of Peterborough Utd - "The Posh".
Odd place to make your feelings known.

Personally, I think Fry is seen by some as being representative of the ultimate middle-class twat aspiring towards aristocracy. Which is not too dissimilar a motivation of Oscar Wilde's, whom Fry owes nearly his entire post-80's career to.

It's well known that Fry is also a good friend of Prince Charles. Fry also defended the bungling of expenses by businessmen and banks not too long ago.

So, why would it be a surprise that those impacted by factory closings and economic downturns, much of which CAN be attributed to financial mismanagement of the wealthy ( not the lower classes ), would be angry that Fry, with a spoiled childhood, adolescence, and who hasn't known a day of real poverty, struggle, or want in his entire life, runs around the world yabbering and blabbering on about 'the people' with whom he frankly has nothing in common?

His tantrums, which he now can blame on BPD ( conveniently enough AFTER he made the BBC documentary on the subject, his arrogance when disagreed with or criticized, his fraudulent attempts to associate and ingratiate himself to the gay community - whome he left on their own for decades while he claimed to be a celibate - and other such fluent hypocrisies, are fairly easy to disect for people who aren't easily taken in by someone simply because they have a 'posh' accent and have borrowed so heavily and for so long from a dead genius: one Oscar Wilde.

Seems to me that the graffitti critics were actually being very kind towards Mr.Fry, all things considered.

Where abouts in Shoreham is this? Looks like an amazing building.

It's on the A283, a few miles north of Shoreham. You can see the cement works on Google Street View.