I was going to write a second post about a recent trip to darkest Essex, but my blogging has been curtailed by several crises during the last few days, so please treat this hastily-written post as an intermission.

The following photos were all found tucked away in books that had ended up in my office, after they'd failed to sell in charity shops. As usual, none of them had any writing on the back to indicate where or when they were taken.

The first is a very striking, hand-tinted portrait, that was found inside a copy of "Queer People" by Basil Thomson: 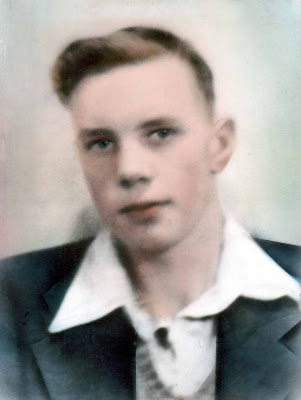 The next two were part of a set from Hong Kong. I particularly like the Chinese mermaid: 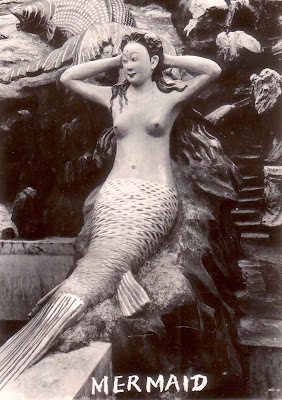 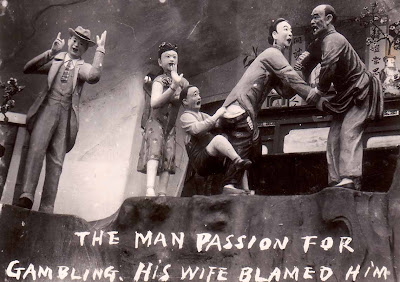 In the next image, look carefully and you might see a ghostly face at the window. This photo was found inside a copy of "A Girl for Sale" by Mabel Barnes-Grundy : 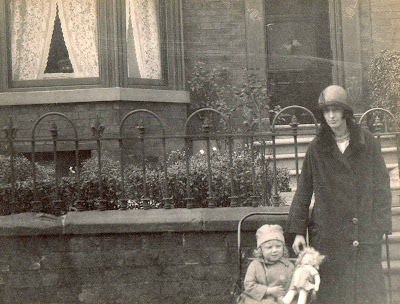 The next image is worth clicking to enlarge. These eight men are something of an enigma and I would love to know what their connection is. Also, what is under the tarpaulin? 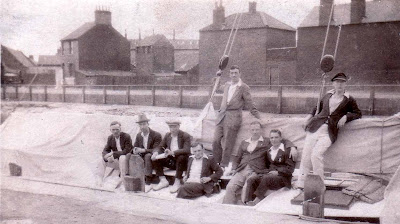 I love the following photograph, with it's weird perspective and compressed depth of field. I was enthusing about the modernist influences to my wife, but she looked at me as if I was mad: "Surely it's just a picture of a car crash that someone took from a window." 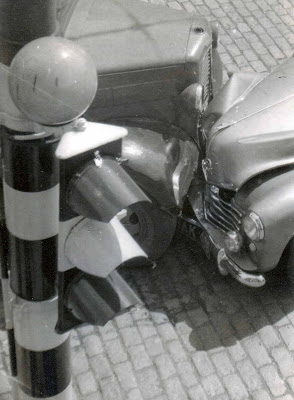 The cars in trouble theme continues here, in what looks like late-1980s London. Although the subject of the photo is some people struggling to push a broken-down car, they have been relegated to the rear distance and the focus is on the two men's amusement. 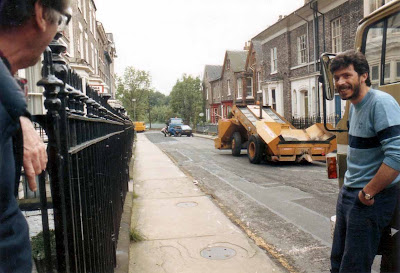 Finally, from serious to coquettish, in four easy stages:

My daughter bought me a book a couple of years ago that contains nothing but photos taken in photo booths over the years. It's quite compelling.

I wish I had your job! As for what's under the tarpaulin, might it be a boom? The block and tackles might suggest so. Still a mysterious gathering, though...

I like the spooky house and the car crash best, though the gathering on the boat seems very odd.

Good luck with the crises.

I think the chinese figures might be from the Tiger Balm Gardens in Singapore. I lived in Singapore for some time as a child. It was a park with tableaus which depicted scenes of what happened to bad people - disembowelment, being tortured by the devil etc. I dont know whether it still exists.
I think the woman in the photo booth photos is from the mid 70's because of the big collar and hairdo

In the penultimate photograph, I think I know what's happening. That vehicle in the middle distance is a Phoenix Chipping Spreader. The road appears to be clear, but for this one car. My guess is that the two men are part of the re-surfacing gang, waiting to cover the road in tar and chippings. The car is being removed to clear the way. I know this, because I was a road re-surfacer in the mid-70s. Some of the council gangers would have a biscuit tin, full of car keys, to try in the locks of obstructive vehicles. When that didn't work, I've seen a family saloon get manhandled by a dozen or so men, to the footpath. And, on at least one occasion, into a ditch!

Thanks Martin. This is why I love the the internet. I post a photo on Tuesday evening and have an answer the following morning.

I love photographs, old and new, and so I'm always looking forward to your blogposts.

Ditto on the Tiger Balm Gardens for the mermaid and gambler picks.

And the car crash is art, really.

I too particularly like the baby in the buggy photo but all a fab. what do you do with the photos?

I keep them in a drawer. It's getting very full.

I had a nasty flash of Dame Shirley Porter at the end... shudder!

I see an awful lot of open-necked shirts here.

Those photos are so lovely, full of stories! I love the picture of the men in the harbour, they look so relaxed, like little boys playing without girls.

I'm a fan of analogue photography because even when people took snapshots, they seemed to given them a lot of thought, because film was expensive, not to mention having the photos done.

It's such a shame that photo booths have become digital too and the images fade very quickly.

I know exactly what you mean about pre-digital photography. Knowing that you were limited to so many shots helped to focus the mind. But on balance, I prefer being able to take lots of shots of the same scene, as it's more likely that I'll end up with a decent photo.

I remember the frustration I felt when I got my pictures back from the developers only to find that the perfect shot I thought I had taken turned out to be slightly out of focus, badly composed or with the wrong exposure.

I also hated being at the mercy of the developers, some of whom would return my photos with the wrong colour saturation, or with fingerprints all over them.

But we certainly won't value digital photos as much in the future. More probably is less.

The tarpaulin is just a standard covering for the upper part of the boat they're on, surely? It would be nice to know if they're working or holidaying, though. The clothes, at least for the first five men from the right, suggest the latter.

I love the photo booth pictures...it looks as if she was trying to get just the right expression. Maybe she was planning on using them for a lonely hearts ad. :)

Oh my God, the Tiger Balm Gardens! I'd forgotten all about them. I also lived in Singapore as a child (R.A.F.Changi) and had nightmares for days (nights?) after my visit.
I now have to enter "revel" as my verification. How cheerful.