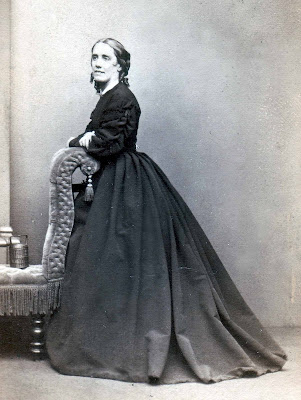 Last month I posted some highlights from a remarkable collection of photographs from the 1860s, which had been retrieved from a skip. Today, another mid-Victorian album was rescued by a keen-eyed person at work.

This selection of photos, which appear to have been taken in parts of East Anglia and Lincolnshire, isn't quite in the same league as last month's find. There are too many studio portraits and most have a stiffness and formality that was, on the whole, refreshingly absent in the earlier album. But there are still some striking images.

Take this, for example: 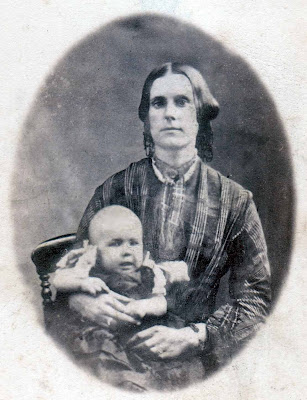 This almost looks like a modern pastiche of Victorian photographs, as the woman's face seems so contemporary.

The same couldn't be said for the next photograph. When a colleague at work saw it, he confidently announced "Here we have empirical proof that people were much uglier in the past." 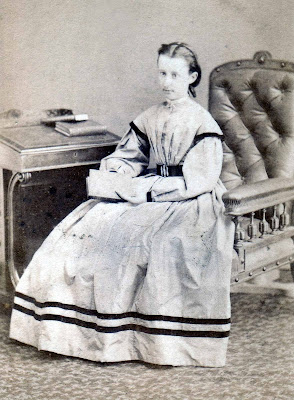 The next photo reminded another colleague of a certain novel by Dickens: 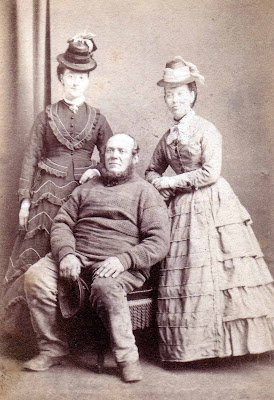 When she asked me if I'd ever read "David Copperfield" I almost choked, but after quickly regaining my composure, I agreed with my colleague that the man could have been Daniel Peggotty (certainly not Steerforth). 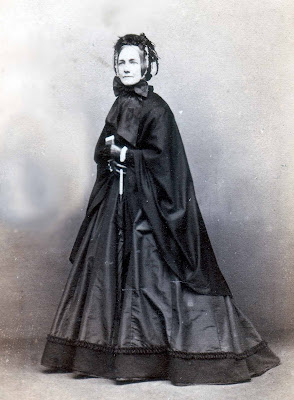 Open any Victorian photograph album and you will see at least one woman wearing black.

My father hated anything that smacked of the 19th century. He had grown up surrounded by Victorians and took great delight in destroying all of the original features of our 1880s house, pebbledashing the redbrick walls and replacing the sash windows with mock Georgian. When I started wearing long black coats and boots, he was apoplectic with rage: "You look as if you're going to a funeral."

My inevitable retort stopped being funny when his health started to decline.

But although he professed to hate black clothes, shortly before he died, my father confessed that he fancied the woman in the Scottish Widows commercials. 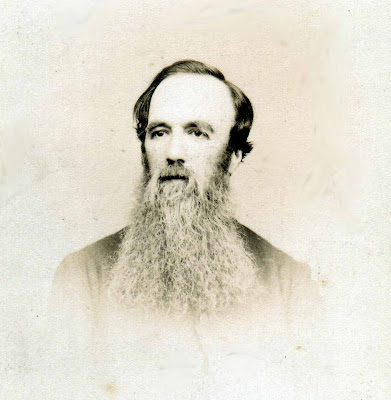 This beard seems to fade out rather than stop. How long is it? Today, a beard like this would stop traffic, but of course, in the 1870s it was perfectly normal and some of my favourite people - Brahms, Darwin and Monet - all sported remarkable, soup-retaining expanses of facial hair. 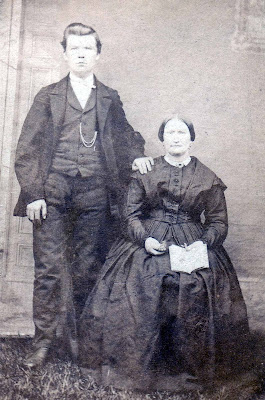 A mother and son photo I presume. I've noticed that quite a few women in the photos from this period chose to be pictured holding a book - presumably the Bible. I like the idea of having a portrait taken surrounded by significant objects, like Holbein's Ambassadors.

These men appear to be holding some of the tools of their trade: 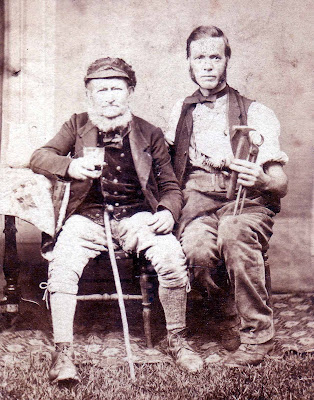 Is that grass in the foreground? Perhaps this portrait was taken outside, with a portable backdrop and strip of carpet to create the illusion of an opulent interior? 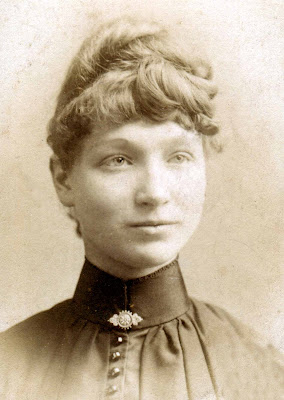 I love this picture. There's a compelling intimacy in this close-up portrait that makes me wish I could know the person in it. And she has beautiful eyes. 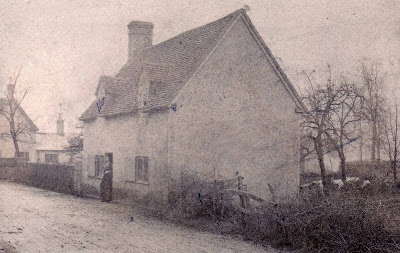 A rare outdoor shot, with a mysterious figure in the doorway. 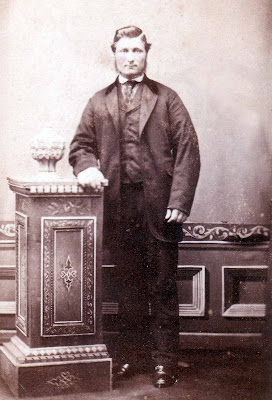 If you ever wondered why people of a certain age had antimacassars on their armchairs and sofas, look at this man's slicked-back hair. Grease is the word. 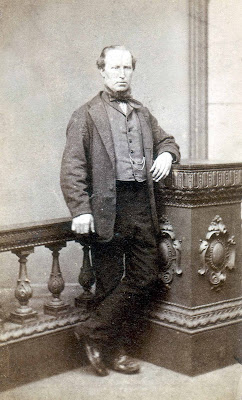 This was a frustrating album. Most of the photos were developed in Wisbech and Boston, but there were also pictures from places as far afield as Llandudno and London. With no images of notable buildings, it is impossible to determine where these people lived . As far as dates are concerned, only two images are marked: 1867 and 1874.

Last month's Cockerham album turned out to be an important social document. Today's collection is less engaging, but there are still plenty of memorable images and amongst these unfamilar faces, there might be an ancestor of somebody we know today.

Can you see any familiar faces? 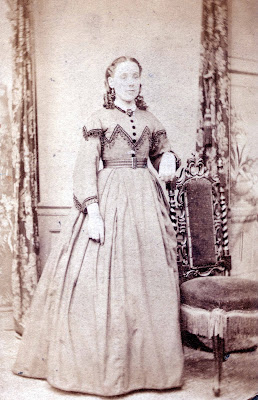 Posted by Steerforth at 8:52 pm

Clara Peggotty, the character in David Copperfield was a woman, not a man.

(Certainly David C. would have told this to his friend Steerforth in conversation.)

And I don't think the Victorian girl is ugly at all. The eye of the beholder.....

You're quite right. It's a long time since I read "David Coperfield" and I'd forgotten that Peggotty is the sister of Daniel Peggotty.

As for the Victorian girl, no, I wouldn't say she was ugly. Few people deserve that accolade. Even George Eliot.

Another sequence of fascinating photographs, Steerforth. The woman in photo, number nine, is definitely my pick of the bunch.

She has a Mona Lisa smile.

Apologies for spelling Copperfield with one "p" earlier. I was fighting sleep.

Your dad's loathing of all things Victorian is interesting and, I (b.1943) found, common among people who grew up in the middle decades of the C20th. It's interesting if only because of the violence of the antipathy in someone born well after the Victorian age officially came to an end.

Victorianism appears to have developed a tenacious grip on the national pysche, persisting with an immensely long half-life well into the succeeding century, long enough for people of your dad's generation to become heartily sick of its values and tastes. For example it wasn't until the early 1960s that we got a Prime Minister who hadn't been born in Victorian times. Wasn't it only the '60s thing that finally slayed the Victorian parent?

Perhaps all cultures have this long halflife well into the new era that is supposed to supplant them. Or perhaps for some reason Victorian tastes and values had a peculiar tenacity. Or maybe the two wars, supposedly the generators of new values, in some ways also paradoxically retarded their adoption.

I agree, I think that the Victorian era cast a long shadow over the last century.

Did the two world wars accelerate or hinder the process of change? That's a fascinating question. At first it seems obvious that they were forces for change, but when you consider the huge damage to the economy and the loss of many talented young people, then it's possible that war also created a culture of stagnation.

Perhaps the persistence of Victorianism was why, even 60 years after Queen Victoria's death, there was still such a violent reaction, with beautiful buildings like Euston, torn down to make way for bland, reinforced-concrete structures.

I was talking to my mother a few minutes ago and when I heard her describe the poverty of her 1930s childhood, it wasn't hard to understand why so many people embraced modernism.

"he fancied the woman in the Scottish Widows commercials."

But how did she become a widow? There were good Victorian methods of disposing of unwanted spouses no longer aseasily adopted- strychnine, arsenic...

Earlier this evening I was watching the rerun of the BBC's excellent 'David Copperfield' on Yesterday. I wonder why you chose Steerforth as your nom de plume? Attractive, but fatally flawed? I am intrigued.... Anna C

You've answered your own question ;)

I find Steerforth one of the most interesting characters in fiction - much more appealing than some of the bland, insipid heroes of Victorian fiction.

(BTW - did you know that in the BBC adaptation, Steerforth was played by Dickens' great-great-great grandson?)

Thank you for another great group of photographs. I am still surprised by how *real* people can look in Victorian photographs. By real I think I mean: like us. And your colleague might be very surprised at how different Victorian standards of beauty were from our own.

Your account of your father's attitude towards the Victorians is interesting, and made me think of how Lytton Strachey's Eminent Victorians seems to have voiced the backlash of the next generation. I've always been enormously attracted to the Victorian era and as a girl I used to wish I'd been born then. My 12-year-old daughter has quite a different idea, and uses the term "Victorian" to mean almost unspeakably cruel and horrible. The truth must lie somewhere in between, as usual - depending on who you were.

I love these. Although the era of my writing is much later (and American), I'm most likely to be reading a Victorian novel. Just finishing up the brilliant Phineas Redux.

That "Dickens" photo has to be actors, doesn't it?

No! Didn't know about Dicken's descendent - what a satisfying time-link.
What a pity Steerforth drowned in the Yarmouth breakers - you could be writing up his hidden, imagined life, like Flashman, in between finding more photographic treasures... Anna C

You're quite right Anna. I don't think he deserved to drown.

Shelley - I don't think they were actors.

What's striking about the photo is that the man isn't in his "Sunday best" for the portrait.

Re your father, I find it extraordinary that people developed an antipathy towards the Victorian age - aside from the chintz (which even I don't care for) - the Victorians were incredibly progressive on so many fronts, and services such as the train system and the postal system were far better then than they are now. Amazing philanthropists abounded, slavery was conquered and national pride was high. If there was anything to get depressed about it was two world wars with a depression in between re the 20th C, oh and all the brutalism that followed. The class system and empire were dissolving anyway, albeit hastened by war.

Steerforth definitely suits you better than Phil, though I have yet to detect a 'fatal flaw' in your character. On the contrary, I think you should be cloned. :-)

I could say the same for you, with authority, as you're one of the two blog bloggers that I've actually met in real life. You and Oliver both proved to me that however good the blog is, the real person is even better.

I love all your posts. You have something that either touches me or plucks a nerve in each one. My son with asperger's train obsession sent me to ebay daily to try to satisfy his wants. MY obsession is finding photographic images of my greatgrandparents and their parents where possible. Seeing the evolution of beards in them is charming. Puts me in mind of another blog I read about the "best beards in Mormon history". Here's a link:
http://www.keepapitchinin.org/2010/10/08/the-best-beards-in-mormon-history/

Thank you for the splendid link - what a wonderful selection of beards!

My vote is for Orson Pratt.

Regarding the gentleman in the Dickensian picture, he's wearing a knit-frock/ guernsey/ gansey sweater, the common garb of fishermen in seaside communities, mainly in Yorkshire, Scotland and Cornwall. Many men who wore these daily for work also had one for Sunday best or special occasions; it was perfectly acceptable to wear one even for a wedding.

Mary Wright's excellent book 'Cornish Guernseys and Knit-Frocks' has lots of information about them, and some marvellous photographs, including the series taken by Lewis Harding in Polperro in the 1880s.

I really enjoy your blog; thanks for posting these marvellous pictures.

Thanks for this Kate. This is what I love about blogging - the fact that there's usually someone out there who has some specialist knowledge that sheds light on the subject.

Hi Folks,
Thanks for the pics here. (I'm researching old photos in connection with a novel I'm writing). Seeing as you asked -- Mr Steerforth -- as to likenesses of modern day folk, with those of yesteryear, I just thought I'd point out that the penultimate photo (2nd-to-last), of that man leaning against the ornate baluster / pedestal, is actually a fairly recent photo of Mark Knopfler, he of the rock band, 'Dire Straits'.
¬_¬

Damn, you've rumbled me! Yes, they're all rock stars. You might recognise the couple in the seventh photo as Jack and Meg from the White Stripes.

many victorian wore blacks ? you'll be surprised to see how many colors appears like "black" when the picture is taken with victorian era photographic material...