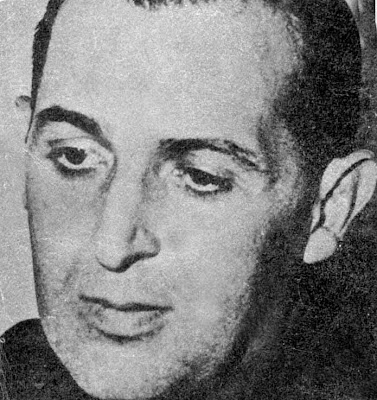 One of the great misconceptions about the internet is that it is some sort of gateway to the sum total of human knowledge. It isn't. Every day I come across writers who, judging by the number of reprints of their novels, were clearly popular in their lifetime. But Google their names and you'll be lucky if you find even the briefest of Wikipedia entries.

One of the worst omissions is David Karp.

Born in New York City in 1922, David Karp enlisted in the US Army when he was 20 and served in the Philippines and Japan. Four years later, he returned to New York and after completing his interupted education, worked as a continuity writer for a local radio station.

In the early 1950s, Karp began to write fiction and published what came to be regarded as his "breakthrough" novel: One. It was a great critical success, acclaimed on both sides of the Atlantic.

'The publishers have bracketed this novel with "Darkness at Noon", "Nineteen Eighty-Four", and "Brave New World", which I at first thought presumptious; but now, after reading it, I am inclined to agree. '

Published four years after Ninteen Eighty-Four, One seems to tread over similar ground, depicting the plight of an individual against a dystopian, collectivist state. However, Karp's future society is far more similar to ours than Orwell's Stalinist nightmare and the "thought crimes" are more nebulous. As a result, some readers have dismissed One as a derivative, watered-down version of Nineteen Eighty-Four.

In my opinion, that is a mistake.

Whether David Karp was or wasn't familiar with Orwell's masterpiece, One succeeds on its own terms and in some ways, Karp's superficially benign state is far more menacing than the histrionics of Big Brother.

Take this exchange, for example:

Burden paused, admiring this thin, intense young man. As he listened he was able to evoke the thoughts and feelings that had come over him during the interview with Frank Conger. 'Yes,' Burden said, 'it is quite correct. Not very polite of me, but hardly heretical. At least I see no heresy in it.'

'Let me go on with the first interview with Mr Frank Conger. Mr Conger, if you remember, seized on the word naive. He pursued it because it was a sort of danger signal to him.'

'Yes, I remember,' Burden said, wondering now if Conger was, after all as clumsy and stupid as he had thought. Evidently not.

'He tried to make you explain what you had meant by it, but you kept retreating, modifying what you had said, deprecating yourself further and further until you eventually wound up lying.'

'Well, I think I said something like - I guessed my work didn't deserve an award.'

That was the lie,' Lark said, extending a skinny forefinger.

'Yes,' Burden admitted honestly, seeing it now. 'I guess it was a lie. But you see, Conger kept at me so aggressively, trying to twist my words. Well, not twist, exactly. But to derive meanings from what I said - meanings I had no intention of -' Burden stopped abruptly, oddly blocked.

One proves that you don't need perpetual war, videoscreens and Room 101 to create an atmosphere of menace. As a work of fiction, it is thoughtful, intelligent and utterly compelling, so why has it become almost completely forgotten whilst other dystopian novels like Fahrenheit 451 are still in print?

Fortunately, some enlightened souls at Westholme Publishing have reissued David Karp's extraordinary novel and they have given me two copies to send to any reader of this blog (STOP PRESS: both copies have been snapped-up). Here's a link to the Amazon.com page.

One is of one of three books that have been reprinted by Westholme Publishing who, to quote the publisher, are "reissuing the book as part of our America Reads series, dedicated to reprinting rediscovered books from key periods in American history. This current group of three books reflects the 1950s visions of the future at a time when the H-bomb and communism appeared to threaten both the West and the future of humankind." 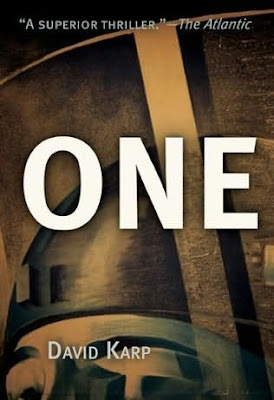 If you like the book, spread the word: review it on Amazon, Twitter, Facebook and the blogosphere. If you don't, please report to the Department of Internal Examination at 3.00 on Wednesday, where we will discuss your negative attitudes and propose a programme of treatment.

For previous blog entries about David Karp, click here, here and here. Unfortunatelty, there is very little information about David Karp on the internet, in spite of his screenwriting credentials. There are lots of pages about two other David Karps, one of whom founded Tumblr, but the most important David Karp languishes in obscurity. That needs to change.
Posted by Steerforth at 6:46 pm

Your blog is gradually introducing me to authors I would probably never have heard of. Sir Philip Gibbs, and now, David Karp.

I remember reading this a long time ago - in, if my memory is right, the distinctive yellow-jacketed Gollancz imprint. Glad to see it's being hauled out of obscurity.

I have never understood why this one slipped through the cracks. It is a superb novel. I've read it twice and am probably due a third read. When I do I will most certainly blog about it.

I found your blog while trying to find information about David Karp. It appears on day you posted this, Oct 2nd, I was discovering the same Penguin copy of Leave Me Alone in a used bookstore on the Upper West Side of Manhattan!

It was only $3, and I bought it for the Mad Man style cover. The bookseller noticed the name and mentioned that although he never heard of him, he had just gotten a box of hardcovers by him!

I was only interested in the cover, being a Penguin collector, but after reading a bit [I'm on page 85 or so] I will definitely be heading back to see what he has. "One", perhaps?

I am very much enjoying the straightforward mid-century prose, and the interest shown in the details of ordinary professional life; I am reminded of James Gould Cozzens, a once popular but now equally obscure writer, whose wife, oddly enough, was a major literary agent for whom our protagonist might have worked.

Speaking of Mad Men, how ironic that his wife wants him to advance himself by going into... advertising!

A copy is on its way to Martin.

I'm glad that other people remember One and that Jim thinks a lot of it. It's quite hard to proclaim a novel's merits in isolation, without the support of numerous reviews to vindicate your opinions.

James - I loved Leave Me Alone. As you say, it's pure Mad Men, with shades of Revolutionary Road. I'm sure it could sell well if it was reissued.

It's rather depressing that this blog appears at the top of the list for a Google search for "David Karp Leave Me Alone". Why is there so little information about Karp on the internet?

I'd love to know more about the background to Karp's switch from novels to screenwriting. I'd also like to know about his political views - was One a satire on McCarthyism, an attack on communism or both?

It would be wonderful if someone who knew David Karp could enlighten us.

How interesting. Thanks for that. My local library is currently doing a Neglected Classics series, and unusually, practically every book I pick up there I'm really enjoying. It's very sad the way great novels and novelists disappear so easily from our collective memory.

Close to my heart are reviewers who try to call attention to work that deserves more eyes.