Yesterday I discovered this children's history book, published in 1945 by Oxford University Press. It has some stunning colour illustrations that remind me of Eric Ravilious and Edward Bawden: 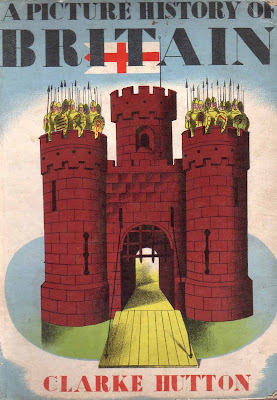 I'd never heard of the author. Clarke Hutton sounds like the name of a character in an F. Scott Fitzgerald novel. I can see him now: tall and athlectic, with brilliantined hair, baggy trousers and spats. He probably went to Yale and his family can trace their ancestry back to 17th century New England.

I Googled Hutton's name and found next to nothing: no Wikipedia entry, no fan site and just one mention on the Tate Galleries' website, which was a masterpiece of brevity: "Clarke Hutton. Born 1898."

Further research revealed that Hutton died in 1988. Then another site claimed that it was 1966. Like David Karp and, to some extent, Sir Philip Gibbs, here was yet another example of a talented person from the mid-20th century languishing in undeserved obscurity.

Clarke Hutton's book is a whistlestop tour of British history, from prehistoric times to the 1940s All of the illustrations are impressive, but I particularly like his depictions of the 20th century: 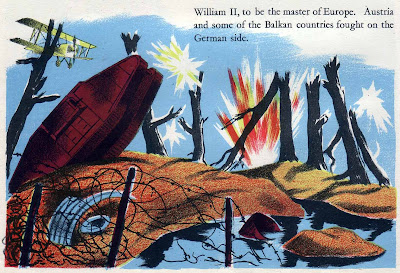 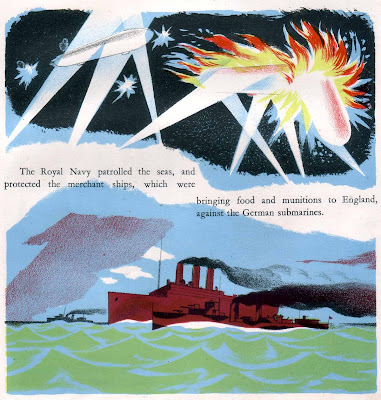 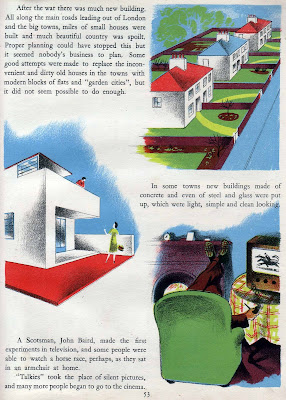 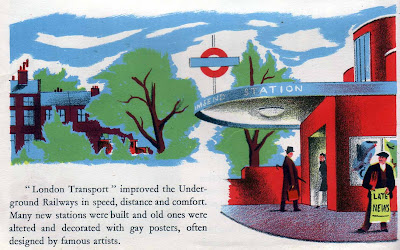 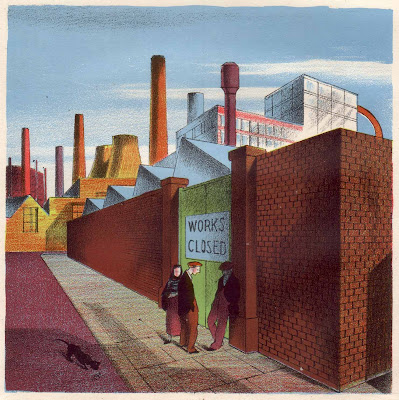 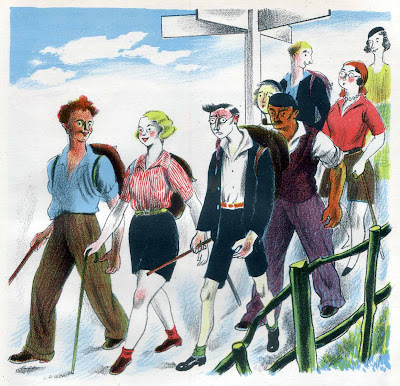 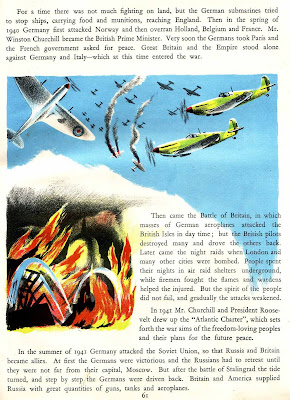 Someone at Oxford University Press evidently also likes Hutton's illustrations, as the book was recently reissued. I would have expected this to have generated some reviews in the press or blogosphere, but apart from a brief mention in the Times, the response has been underwhelming.

Fortunately, a little more Googling has enabled me to come up with the briefest of biographical sketches.

Clark Hutton was born in London in 1898. He studied at the Central School for Arts and Crafts under A. S. Pitcher, replacing him in 1930 as the instructor in lithography. As soon as he took up his post, Hutton began to experiment with using the autolitho technique for book illustration. His aim was to develop a process that would make it possible to produce affordable, colour illustrated books for children.

Working with Noel Carrington at Penguin, Hutton eventually realised his vision and the Picture Puffin imprint was born.

That's as much as I know. I have no idea when Hutton died, where he lived or whether he had children. I'd love to know more and hope that someone out there will be able to add some more information about this unjustly forgotten artist.
Posted by Steerforth at 9:04 am

There's a lot about Hutton's work in a terrific new book published by the Penguin Collectors' Society called Drawn Direct to the Plate by Joe Pearson, which is a history of the Puffin Picture Books. Hutton did a lot of work for Noel Carrington before PPB got going, notably for Country Life. No biographical details beyond what you've already come up with as far as I can see, though.

Beautiful. With echoes of art deco. Particularly like his houses and the Tube station.

Enjoyed this very much, thanks. That first one looks as if Hutton might have drawn inspiration from Nash, no?

Thank you for sharing, brilliant stuff!

A couple of his illustrations appear in 'Penguin by design: a cover story 1935 - 2005' by Phil Baines, but no accompanying biographical info, I'm afraid.

A wonderful book - I grew up with my mother's copy, and I have shared it with my daughter. When I was a child - the mid-60s - this style and standard of graphic design had pretty much disappeared from everyday life, but I remember picking up early Picture Puffins for pennies at jumble sales. Today, I admire the pictures (also reminiscent of the historical prints that John Piper created for Lyons Corner Houses), and also the simple certainties of the text - the war was ended, and the world would become a better place - where "all the men in all the lands may live out their lives in freedom from fear and want".

I have a small abstract of his painted in 1967 very similar to "Blue passages" listed on AskART,I think at this time of his life he was very influenced and interested in what was going on in St. Ives at that time.

The illustrator, John Vernon Lord, who lives in Ditchling, was taught at the Central School in the mid-1950s by Clarke Hutton, among others. He would I am sure provide you with some information. John once described CH to me as "military-looking"!