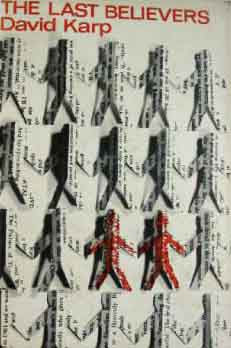 As you may have gathered, I have become a big fan of the American novelist David Karp. His novels One and Leave Me Alone were a revelation, and I find it inexplicable that his books are out of print.

I used to think that you could find anything on Google, but apart from a short Wikipedia article and a couple of obituaries from nine years ago, it is as if Karp has been wiped off the face of history. To achieve that level of obscurity as a writer you normally have to be pretty crap, or piss off your publisher so much that they effectively kill off your career. One publisher allegedly did it to one of their authors - a moderately successful female crime writer - and I haven't seen a book by her in 15 years.

We know (or at least, I think) that there's no questioning Karp's ability as a writer, so was he a bit of a tosser? Not if the following extract is anything to go by. It took me a long time to find this article and I apologise for the lengthy quote, but it's a nice story:

Do you recall David Karp? Fine writer. Won a Guggenheim back in '56. Nobody remembers that. Well, Karp got into TV writing and production when the paperback market went soft. He did some stuff for Playhouse 90 and The Untouchables. Won an Emmy, I'm pretty sure, for an episode of The Defenders.

Anyway, back in 1970 he adapted his own novel, Brotherhood of the Velvet, into a TV movie for Glen Ford. It was a conspiracy flick. A little cheesy but still ahead of its time. I was 10 years old when it broadcast and, for whatever reason, it made a big impression. So I wrote Karp a fan letter and, shockingly, he wrote back. Can you imagine that? He's a big TV writer at this point and he takes the time to write to this pre-teen punk in a factory town back east. So we had a little correspondence going for a few months--I told him, I confessed, that I wanted to be a novelist. He sent me a mint copy of The Last Believers that I still have.

Well at some point I started writing him a letter and I got a little sidetracked and began rambling about an idea I had for a dramatic television series. I had gotten hold of a little pamphlet written by D.C. Fontana, I believe, that detailed, essentially, how to write a pitch. Useful little document. So in this letter to Karp, I started pitching this notion I'd been cradling for a year or so. This idea I'd been hatching on long winter walks home from school. It was just nuts, really an off-the-wall thing. But what happened was the letter ballooned into this 60-page monster. I had to mail it in a manuscript envelope, right? About two weeks go by and suddenly I'm mortified that I wrote this thing to Mr. Karp, that I embarrassed myself so profoundly to a flesh-and-blood writer. And I'm brooding over this shame one afternoon in the rocking chair of my yellow kitchen, pretending to read a Treasure Chest comic book. And my mother is at the stove, you know, making a meatloaf. And the phone rings. So Ma wipes off her hands on the dish towel and grabs the phone and talks for a second. Then she covers the receiver with her hand and looks at me suspiciously and says, "It's a Mr. Karp for you."

Can you imagine this?

I'm ten, eleven goddamn years old. I almost dropped to the floor. I started shaking my head to refuse the call. But my mother, a stickler for doing the right thing and being polite, insisted I talk to this man. I think she thought it was someone's father or something. I remember this so clearly. So I take the phone and I sit down on the floor in the hallway and, terrified, I say hello. And Karp was just wonderful. Such a gentleman and quite funny. He said he'd read my series pitch and that he loved it and that he wanted to show it to some people. I swear to you, he even asked if I had representation. I didn't even know what that meant.

So David Karp was not only a good writer, but a decent bloke too. If chaos theory is correct, then I hope that the tiny ripples of this blog will eventually grow into a proper Karp revival. In the meantime, I promise (well, almost) that I this will be the last time I rant on about David Karp.
Posted by Steerforth at 10:56 pm

Just out of curiosity, who was the kid?

No no, do feel free to karp on about him: it might actually get me to read my copy of Leave Me Alone which arrived at the weekend and was in offputtingly filthy condition.

I went googling for him too, but couldn't find much more than a few entries in Crime Fiction encyclopaedias, which rate his "hardboiled" fiction, presumably the stuff he wrote as Wallace Ware.