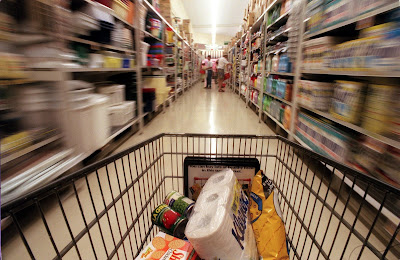 Food prices may be rising faster than inflation but don't worry, those well-known philanthropic societies - the supermarket chains - are apparently doing their bit to help us with their 'inflation-busting' offers. How nice of them.

I particularly appreciate the half price strawberries offer in Tesco and Sainsbury's. I had no idea that a punnet of strawberries normally costs £4. Nor did I realise that a fairly indifferent bottle of Pinot Grigio del Venezie normally sells for £7.99, rather than Tesco's incredibly generous half price offer of £3.99.

Good old Tesco. My Tesco. Our Tesco, according to the posters outside the store. During a recent refit I was assured something along the lines of 'We are making your Tesco a bigger, brighter store.' I had no idea they had been nationalised.

Criticising Tesco is, I realise, about as controversial as saying that the Holocaust was a bad thing and I don't want to single them out. From what I can see, several supermarkets are cashing in on the recession by expanding their long-established practice of hiking prices to make special offers seem more attractive.

I have been trying to break free from the tyranny of the supermarkets by growing some fruit and vegetables, but as soon as everything starts going well, little buggers like these turn up: 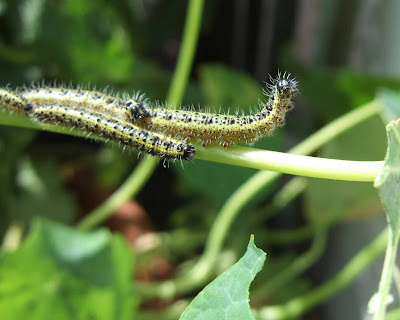 The one in the front's got a bit of an attitude, don't you think? But I can't get rid of them as there's supposed to be a shortage of butterflies, so I must let nature take its course. In the meantime, I shall reluctantly continue to patronise my Tesco.
Posted by Steerforth at 10:08 pm

I did some consultancy work with Tesco earlier in the year, I can confirm that they are burdened by layers and layers of incompetent management groups, assistants and development specialists - all of whom cost thousands, crush any creativity and waste huge resources....which probably confirms your theory that hey have been nationalised.

I thought the exact same thing last night when, in *my* local Sainsbury's, I purchased a punnet of *half-price* blueberries.

And let's not forget that Marks & Spencer has officially been relabelled (according to the bags and ads) "YOUR M&S" which irritates me beyond measure. Still, at least they have the gall to charge you £5.99 for a punnet of cherries and not even pretend to be good value.

Didn't some Chinese hack get into trouble for criticising Tesco's menacing invasion into his land recently?

Personally I am most disappointed that Argos didn't try to sue me for slating their 'Drinking Gifts' recently - I could do with something to get my blog into the newspapers with!

Shall we tip each other's blogs off so we all get threatened with su-age, and thus public prominance?

That's a good idea, although I don't think Tesco would have a leg to stand on. We'll have to think of something more inflammatory!