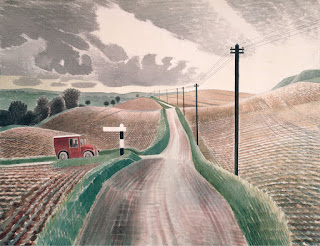 A few days ago I went to Dulwich to see the Eric Ravilious exhibition (which ends on August 31st) and was both delighted and appalled to see that it was packed with vistors. I partly blame James Russell, the exhibition's curator, for tirelessly promoting Ravilious's work and producing some gorgeous hardback books, but the other culprit must surely be the internet.

Part of the appeal of Ravilious is, I think, the fact that he celebrates England in a manner that is free of bombast or sentimentality, finding beauty in the mundane and commonplace. It is an art that can only have been created by the generation who came of age after the First World War.

As many will know, Ravilious's life came to a premature end in 1942, when a plane he was travelling in as a war artist went missing off the coast of Iceland, on September 2nd.

Less well known is a death that took place ten weeks earlier, when a young composer called Walter Leigh was killed in action at Tobruk. 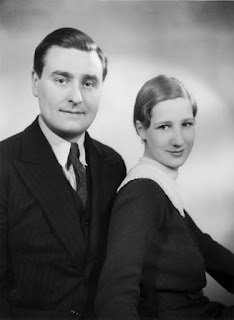 Born in Wimbledon, exactly two years to the day after Ravilious, on June 22nd, Walter Leigh grew up in a middle class family and began having music tuition at the age of eight. His early years are something of a mystery, but thanks to this website, we know that when he was at Cambridge, Leigh decided to switch from studying English to Music.

After Cambridge, Leigh travelled to Berlin and, like several of his contemporaries, studied with the German composer Hindemith. It was there that Leigh began to develop a style that mirrors Eric Ravilious in its clarity and restraint, eschewing melodrama in favour of a gentle, understated melancholy.

Here is Walter Leigh's greatest work, the exquisite Concertino for Harpsichord and Strings:

If you can't face hearing more than a couple of minutes, skip to 3:23 and try the sublime middle movement. Listening to this work is always a bittersweet experience, as I can't help wondering what Leigh would have gone on to write if he'd survived the War.

Another gorgeous piece that I find quietly heart-rending is the first movement of Leigh's 'Music for Strings':

But like Ravilious, Walter Leigh wasn't precious about his art and would happily write in a more populist style if the commission called for it.


Walter Leigh died at the age of 37. Unlike Eric Ravilious, he didn't leave a huge body of work behind and a projected symphony never progressed beyond the stage of rough sketches. But the chamber, piano and orchestral works that exist show a composer of exceptional gifts who, had he lived, would have become a major figure in British musical life. 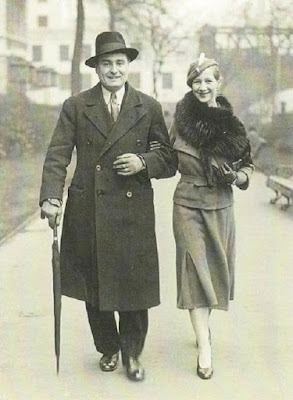 I'd never heard of Leigh before but the harpsichord piece is quite lovely - thanks for posting this!

The Ravilious stuff is stunning! You've prompted me to discover his Wedgwood designs which may help make some useful profit for this poor dealer...

Why have I never heard of Walter Leigh? I like British late romantic music, so I'm baffled. Beautiful stuff; thanks for bringing him to my attention.

Mind you, 37 is pretty old for a composer, by the standards of Mozart, Schubert, Gershwin, Chopin (okay, he was 39, but still young), Butterworth, Bellini...

Rog - His Wedgewood seems to go for a song now. I wish I'd bought some 20 years ago.

David - True, but there are also composers who didn't really get going until they were over 40. Vaughan Williams wrote over half of his symphonies after the age of 70.

There is a very good and unexpected selection of rarely seen Ravilious work in the current (free entry) edit from the permanent collection at the Towner in Eastbourne. I cannot recommend the whole exhibition highly enough - the upstairs show - William Gear, is also sublime and quite a revelation.

Thanks Richard, I'll try and get over there next week. I've just returned from the airshow at Eastbourne, which both of my sons said was "boring". I'll go without them next time.

You didn't go back on the train did you? Never again. Vulcan a little muted? Treating it gently to prevent disintegration? Bob

No, I didn't. I drove and parked on the roadside at Beachy Head. I haven't seen a Vulcan before so I don't know what they're normally like, but it did seem to be going quite slowly. We were still very impressed though.

It was astonishing at Shoreham last year - truly made the earth move (leading to a year of uxorial disappointment & ongoing). Much louder than today's Typhoon. I'll be at Shoreham next w/e to see it for the last time.
Driving was wise. Stacking system at the station, few staff & a massive but v. well-behaved swarm. Long wait. No lavatories. Packed train. Bob.

The Music for Strings sounds very like Samuel Barber's Adagio. Or the other way around

The Walter Leigh came first. I can't say it reminds me of the Barber, but for some reason Purcell springs to mind.

Thanks for this -- the adagio is beautiful. I had heard of Leigh, but never really explored his work. That will change...

Glad you like it Chris. I wish he'd had the time to write his symphony.

Played the Leigh Concertino in the early 60's with a youth orchestra in Coventry (2nd violin!), with piano instead of harpsichord - we 'toured it' along with Warlock's Capriol Suite and some other stuff to Kiel on the Baltic and other German cities, ending up in Dresden, with war rubble still in the streets. A simply scored piece of great charm and quite easy to play - and needed to be!

Mahlerman - Lucky you! I've got an old 1940s recording of the piano version - it sounds more Hindemithian. The harpsichord version would probably be one of my Desert Island Discs.

I wish they had been playing Leigh while I went round the exhibition. It might have subdued some of the mindless prattle that I had difficulty shutting out. One group of women, stationary beside a picture gossiping about something might as well have been sitting in the cafe for all the notice they were taking of the artworks.

Yes, I had similar experience. Everywhere I went, two women were busy talking about curtains, conservatories and a home in Worthing. I also didn't care for one of the gallery staff - a tall man who kept striding up and down in loud shoes, as if he owned the place, frequently walking across me when I was looking at a painting.

I was also amused by a man in the queue who clearly loved the sound of his own voice and loudly slagged off an artist who is related to my wife.

It was a well-curated exhibition and I was really glad to see that it was a success, but a part of me yearned for the days when few people had heard of Ravilious.

Nooo! Now of course I want to know which artist, but you must hold your counsel.
I too was aggravated by the tall man. I went in reverse order through the exhibition (to get away from the women) and he gave me a hard stare as I approached and then left through the entrance.

William Powell Frith, who said of himself "I am not a great artist, but I am a very successful one."

Perhaps we should complain about the tall man.

I hadn’t heard of Leigh before either.It’s always good to discover new music of this quality. I’m not a great lover of harpsichords but this piece is lovely.

Thomas Beecham described tge sound of a harpsichord as "like two skeletons copulating on a corrugated metal roof".