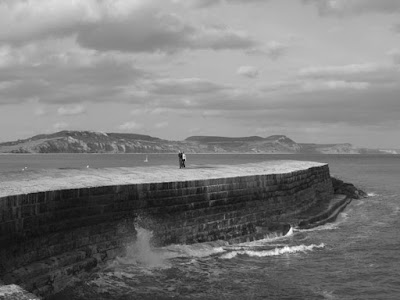 I have just returned from the first family holiday we've had in three years. It lasted for two days, which was quite enough for everyone. It seems extraordinary that my childhood holidays were always a fortnight long.

One of my earliest memories is of a disastrous stay in rural Wales, where my parents had booked bed and breakfast on a remote farm. It rained for the entire two weeks and the holiday felt more like penal servitude.

The farm's owners rarely spoke English and regarded our presence as a necessary evil, although when the weather was particularly bad, we were once invited to watch an episode of 'The Virginian' with them.

We never went back. The following year, we began the first of many successful holidays at a caravan site in Devon, where I befriended two girls and their younger brother. We got along so well, our parents decided to synchronise their holidays. I have many happy memories of Enid Blyton-style adventures involving deserted cottages, poachers and secret dens. 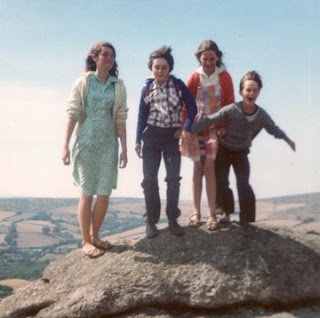 When the holiday began, the two weeks ahead felt like an eternity and we gladly turned our backs on the dreary, monochrome existence of our real lives. Local landmarks became old friends: a telephone box, a garage with a blue door, a wonky road sign and prehistoric tumulus in the distance. As we approached the caravan site after a day out, my mother would say "We're home."

The long summer holiday was a gift I wanted to give to my children. It never occured to me that the prospect of spending two weeks in an idyllic setting, exploring the countryside and beaches, would be anyone's idea of hell. However, children on the autistic spectrum hate a break in their routine.

When I broached the subject of a holiday with my son, I felt as if I was brokering a deal as challenging as the Greek debt repayment. In the end, we agreed that two nights would be acceptable as long as the hotel had wifi and wasn't further than 120 miles away.

It was a plus point that we were returning to Dorset, as my son would know what to expect. I didn't mention that the hotel was 800-years-old, as that would probably be a bad thing in his book. 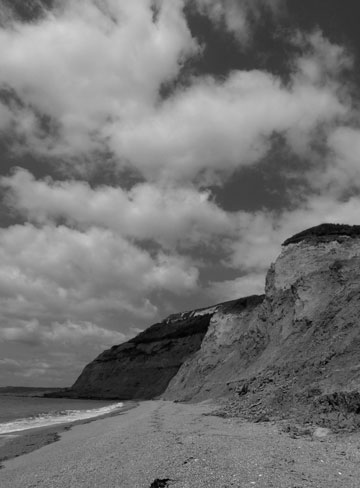 Golden Cap, the second highest point on the south coast of England

Dorset was as pretty as I remembered it, but many of the traditional family-run shops have been replaced with chi chi cafes, artisan bakeries and places selling rather poorly-executed paintings. It looks as if the London diaspora has reached Dorset and the rhotic r has been replaced by the 'flat white'.

If I had my way, I'd reintroduce smocks and pitchforks, with penalties for anyone who didn't say their rrrs and oiz properly. 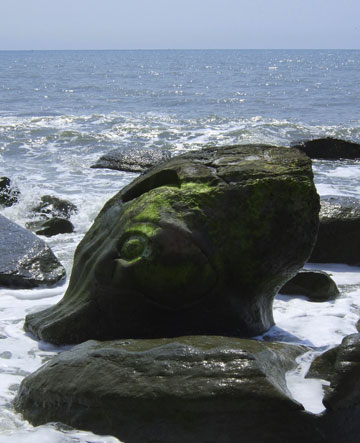 A strange rock formation that vaguely resembles a porpoise's head 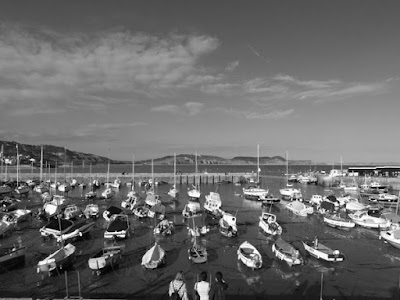 Overall, the holiday was a success. There were a few wobbles and I felt sorry for my younger son when a fossiling trip came to an abrupt end, but most of the time we managed to achieve something that faintly resembled a normal family holiday. When we returned home, our older son said that he would like to do it again.

P.S. I've become a big fan of Instagram recently, so here are a few pictures from the trip: 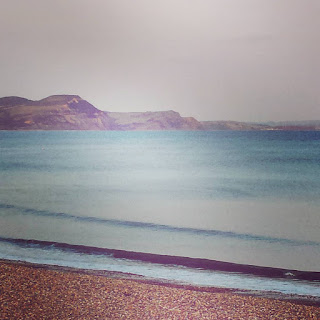 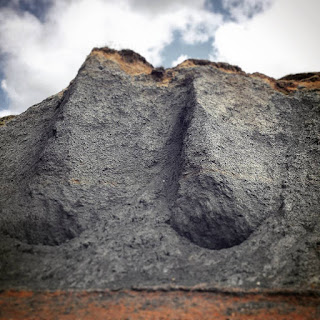 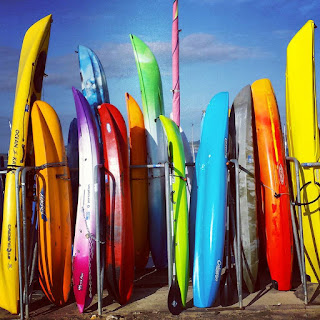 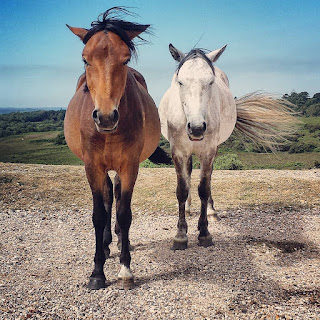 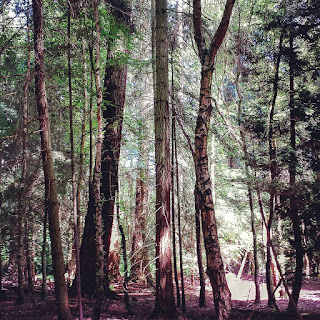 Send me yours and I'll folllow you.

I'd like to see how the Welsh B&B would survive Trip Advisor nowadays!

(I'm THE_PEAKSTER if you are up for another follow)

Re: Trip Advisor, I don't think the Welsh farm would even get a single star today. I remember having nothing to do when it rained (if only my parents had packed some Lego or some paper and pencils). Today's children expect wifi and DVD players as standard. How times have changed.

Thanks so much for the picture of these unsung heroes, the Famous Four. ;-)

Thanks Tristan. It certainly was a team effort. My younger son has become particularly good at managing his older brother's moods.

Tororo - It did feel as if we were in an adventure and my dog was able to play the 'Timmy' role, with slightly less vigour than Blyton version. Our parents used to let us wander around the countryside on our own and we could do as we pleased, as long as we got back in time for tea. Happy days!

Sounds like a successful trip. I never dreamt that I would grow up to find family holidays such a challenge. I have such romantic ideal memories of holidays as a kid, yet my parents argued & it did rain. Especially in North Wales! Interesting what you say about Instagram. I haven't joined it but have just read what Jane Brocket has to say on it. http://www.yarnstormpress.co.uk

We had some dire hols in Northern Ireland (rain, rows, yelling). Sun shone sometimes! I love the place to bits. But I've never had to run my own family holiday.

Funny to think about childhood holidays. We usually drove up to the Canadian prairies to stay with my grandparents, but I was never bored. I always took lots of books to read, and one summer, when my mother and I stayed on for a couple of months while Grandma Nelson recovered from surgery, Grandma taught me to make doll clothes out of her fabric remnants. I had a blast. I made all sorts of fanciful costumes for my doll, including a lovely green hat with a beautiful ruby red feather on it. But for me, the key to not being bored was always a book of some sort, and I read dozens every summer. xoxox

Trebarwith Strand in Cornwall and the same cottage for three or four years in a row was the one of ours I remember. I can't remember being bored ever either, but did loathe having to share a bedroom with my younger brother! I'm so glad your break went well, and I hope it will be the first of many. Lovely photos.

We crept up the North Wales coastline from Barmouth on three successive self-catering summer holidays. We didn't have a car and it was dire. I particularly remember the greasy musty smell of the cutlery drawers full of rusty tin openers and cracked wooden spoons. It makes me shudder to remember them. I have no idea how my mother selected these cottages. I doubt there was even a colour photo to be guided by. I'm glad you managed a break. I hope you can extend the duration little by little.

Katharine - I like Instagram for two reasons. First, its enables me to transform a fairly mundane snap into something quite beautiful, giving me the illusion that I'm a better photographer than I am. Second, beyond the selfies of the narcisistic, there are some stunning images from a random series of places that reawaken my desire to travel.

Lucy - I naively thought a family holiday would consist of children playing with other children while the grown-ups read and relaxed. How wrong I was. Our sons just want to be with us, apparently, and we smile through gritted teeth when they decide to join us rather than play in their own rooms. As much as we love them, is it unreasonable to want to read a book for a couple of hours?

Carol - I don't remember being bored on holiday when there were other children around - only when I was stuck with my parents and it was raining outside. It must have been nice staying with your grandparents in a place where your imagination could run wild and it sounds as if they were very pleased to have you there.

Annabel - It's always good when you find a place that you return to time and time again, even if you have to share a room with your brother!

Lucille - The carless holiday may be more ecologically sound, but I just remember the tedium of waiting for rural buses, which were sporadic, to say the least. Once, I very stupidly bought a children's dinghy and travelled to Lyme Regis from Charmouth by sea, rather than wait for a bus. Nothing happened, but in hindsight it was a very irresponsible thing to do.

Family holidays are usually better once long past . For some reason my grandparents used to take me with them to the seaside for a week ... none of us really wanted to be there but we dutifully inhaled sea air , ate vinegary cockles , admired the laughing policeman and I fed everyone's cash into a shove-halfpenny machine . "A change is as good as a rest ", said Granny after it was all over for another year and we all went home .
Actually , I do now remember it all with a smile .

Dale said...
This comment has been removed by a blog administrator.
1:27 am

And what happened to the post I wrote that the above comment (which was not intended for publication, as indicated) asked you to make an amendment to?

That's at least three missing posts now, one of them Steerforth's.

Are you all right, Steerforth, or have you been replaced by an imposter bot?

Sorry Dale - I must have published your comment from my mobile without looking at the contents, so that I could read it later. When I did, I was baffled because I couldn't find the comment that you were asking me to address. It's all very confusing.