Why the Berlin Wall Fell

Stalin must have been turning in his grave when these adverts were shown on Soviet television, shamelessly promoting petit bourgeois values:

I'm not quite sure what the first commercial is advertising. Revolving chandeliers? Flashing disco light switches? It's never made clear.

The three men in the second advert look as if they've been given the afternoon off from KGB headquarters and exude an atmosphere of silent menace.

The final commercial is for a 'mini-stereo'. It has two headphone sockets, as the authorities probably allocated one for every two people. I hope they had the same taste in music.

Everything in the three overlong commercials, from the tinny electronic music to the fashions and hairstyles, is a watered-down version of what was happening in the West.

25 years on, everything has changed. I wonder what the gentlemen of the Politburo would have made of this 2012 advert:

Valentina Tereshkova would probably also be turning in her grave, if she wasn't still very much alive. I wonder if she yearns for the good old days before revolving chandeliers started to undermine the edifice of socialism? 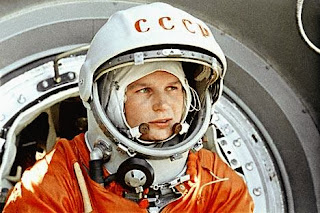 Hmm..
I had an interesting experience when I clicked on the second youtube clip while the first was still running (self preservation.. if I had stuck around I would have had to run for the bathroom).
Love that chandelier... it's called bringing the aristocracy's luxuries to the common people.
But we the petit bourgeois people will never have the chandeliers that were hanging in the imperial palaces, even if it eats our heart out to know it... unconsciously, of course.
Personally, I still prefer the idea of an aristocracy magnificent enough to open up its coffers, and palaces occasionally to the plebe so that we can gawk and appreciate, while exemplifying manners of exquisite taste and grace of course (them, not us. We should be grateful without being obsequious, of course, and not slavish in our appreciation.).
Rather than going through the motions of revolution so that we the people can have garish, watered down, vulgar replicas of what the aristocracy once had, in our own homes.
Envy was once one of the seven ? (more ? please correct me) deadly sins.
Funny how we have forgotten that it manages to bring your society down...
The clips make me yearn for a little trip to Vizille, a French château in the Dauphiné which is now one of the French presidents' official residences (never used, never used, but open to the public...).
Time to gently bathe in the declining remnants of real aristocracy.

Debra - I quite agree. Scrap the traditional aristocracy and they're invariably replaced with something far worse, without the noblesse oblige of their predecessors, whether it's the commissars (or should that be commiczars?) of the Soviet Union, or the Donald Trumps of today.

Annabel - It's a combination of curiosity and persistence.

I think you’re wrong about the KGB association within the second of the three linked clips. Those choreographed robotic poses and cold stares, coupled with the synthesised backing track, can only mean one thing - you’ve stumbled across a long lost video by the Russian tribute act Graftwork.

A superb idea, Peter. I wish they really existed.

Goodness. I'm reminded of both Heaven 17's 'Penthouse and Pavement' and SCTV's CCCP1.

I remember the audio for the 2012 ad having been profusely used as a recurring audio for the sexy moments from some early 80s show that was, sort of, the French TV's reply to the Benny Hill show. Such things never age.

Brian - Both videos were new to me, so thanks for the links. The SCTV clip made me nostalgic for an age in which satire was still a potent force, before today's celebrity culture superseded it.

Tororo - I'm not surprised they used that 'sexy' music. The Russians have gone from having a diluted version of Western culture to a garish, hyperreal parody. It's a shame, when they have such a rich cultural heritage.

You're right about things like Benny Hill never aging - they have a timeless awfulness.