The Ladybird Book of the Recession - Part Three 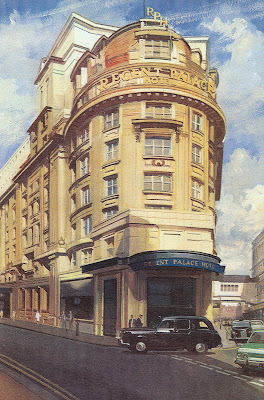 This is a hotel. It is a place where people can sleep and eat, if they are away from home.

They are called guests.

Many people work in the hotel to look after the guests. 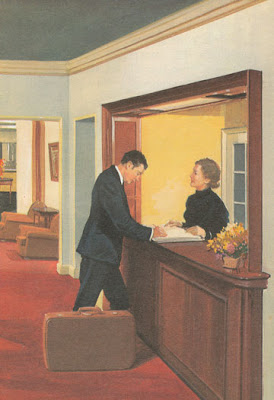 The lady is called a receptionist. She asks the man what his name is.

He tells her that it is Mr Smith.

Mr Smith does not want anyone to know what is in his suitcase.

Mr Smith drops the suitcase by accident. It rattles and begins to make a buzzing noise. 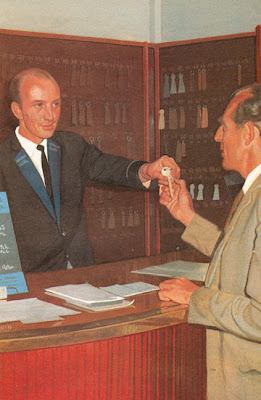 This guest is also called Mr Smith. He has just told the hotel porter that his niece will be visiting him later.

Mr Smith has asked the porter to help his niece, as she is from another country and does not speak very good English.

The porter asks what country the niece is from. Mr Smith is not sure.

It could be Latvia, he thinks. 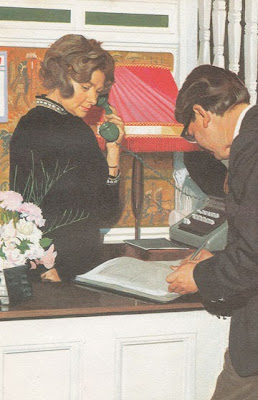 Jean is the hotel's main receptionist. She can see that the new guest is writing 'Mr Smith' in the visitors' book.

With so many guests called Mr Smith, it can be very confusing when the hotel receives a telephone call for one of them. 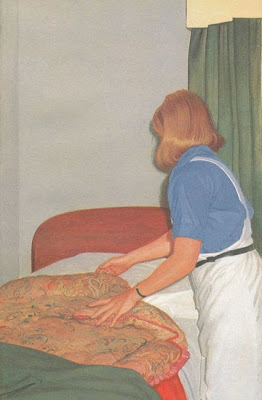 This lady is called a maid. She tidies the room and puts clean sheets on the bed.

The maid has found something that she does not like.

The sheets will have to be thrown away. 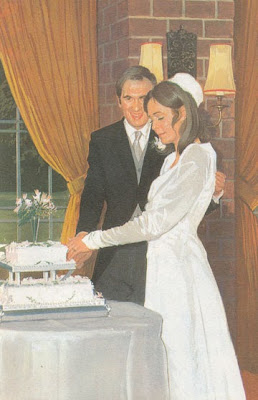 Many hotels hold wedding receptions. This man is very rich and has paid the hotel to hold a big party.

He has married his secretary, who is 24 years younger than him. He is very happy.

The secretary is in love with someone else. 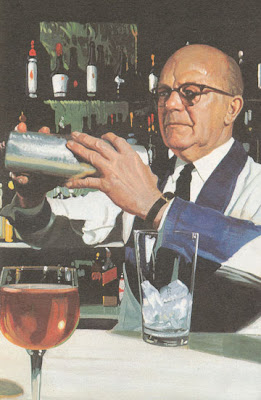 This is Reginald. He is the head barman.

Reginald can hear voices in his head telling him that the world is going to be cleansed in flame. 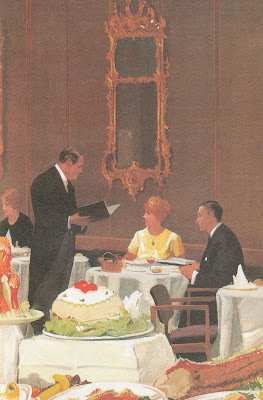 Maurice is the head waiter. He is asking the guests to speak quietly, as their voices are too common.

Maurice suggests that they might feel more comfortable in a 'steak house'. 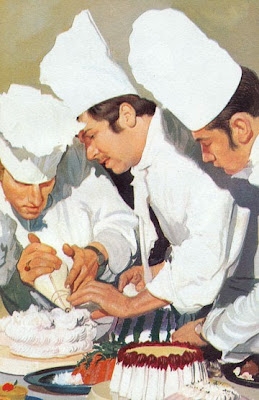 Some guests can be very rude to the staff.

A lady from South Africa has been unkind to one of the waitresses, so the kitchen staff are adding a special ingredient to her desert.

The rude lady will not know about the ingredient. 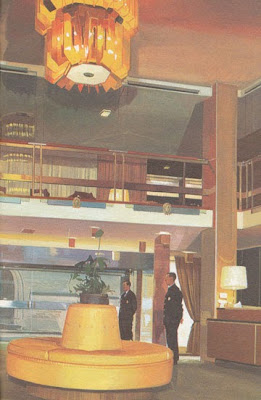 These porters are standing in an empty foyer.

The hotel used to be the most popular one in the city, but not many people stay here now. 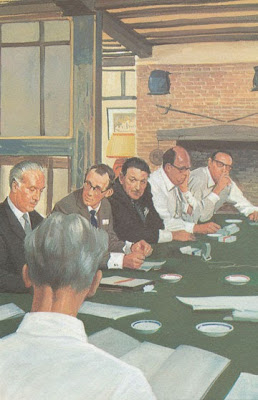 These men are in charge of the hotel. They are talking about why the hotel has fewer guests than it used to.

One man thinks that guests now expect a television and private bathroom.

Another man wonders if ballroom dancing has gone out of fashion. 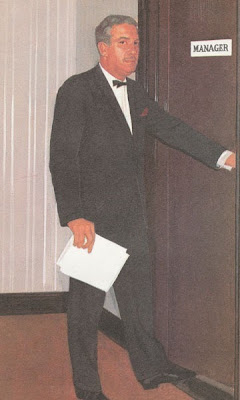 With fewer guests, the hotel does not need as many staff.

Stanley is the deputy chief porter. He has been asked to see the manager.

The manager will thank Stanley for his 32 years of loyal service, before asking him to take early retirement.

Stanley had thought that he was going to be offered a pay rise. 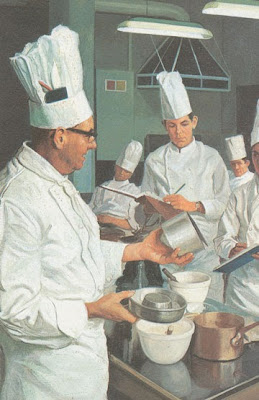 In the kitchen, everyone is worried about losing their job.

Some of the staff are starting to swear back at the head chef. 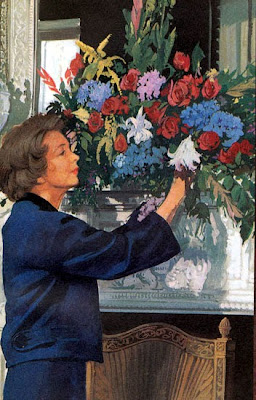 Outside the bar, Jean is changing the flowers.

Reginald the barman walks past her, muttering something about the 'end times'.

Jean can smell burning.
Posted by Steerforth at 3:05 pm

Brilliant (I guess I'll not be the last poster using this adjective). There should be more educational books like this one.

Lucy - Ah, a missed opportunity. I should have tracked down a Polizzi clone in another Ladybird book. I'm sure there's a lookalike in the Ladybird Book of Nuclear Power.

Tororo - Thanks. I think more children would pay attention if educational books had a dark subtext.

An educational book for the modern child! I cannot help thinking that something has been lost during the last 45-50 years.

Once you start adding the look-a-likes, the text can certainly take on additional meaning. I reckon that’s Prince Phillip checking in at the hotel but I can’t work out why Paul McCartney is working in the kitchen. Would have though that he was recession proof.

If only Rupert Murdoch had gone into bar work instead of journalism.

Prince Philip meeting a young lady in a hotel? I expect Kitty Kelley would have something to say about it.

As for Paul McCartney, he's probably trying out a new recipe for the Linda McCartney range of ready meals.

I recognised The Regent Palace Hotel on the cover. In its heyday, it was almost thought quite luxurious although the 1000+ bedrooms were small. It acquired a bit of a reputation in the 60s - an ideal place for all those Mr Smiths! It's now been demolished.

I'd buy a copy of that book. Thanks for the chuckles.

Annabel - I had no idea that it was a real hotel. I've just Googled the name and there it is! What was its reputation the the 60s?

It was next door to Soho - say no more!

It's doubly funny because back in the days, when I used to give training courses introducing hybrid microelectronics (which was my field!), the participants from Europe often wanted to tag on a budget weekend in London onto the end of the course and we always put them in the Regent Palace!

You must be able to put your diabolical talent to some form of commercial profitability, Steerforth.
"Book Upcycling" has a nice ring to it.

The guest being handed is key is Prince Phillip.
The hotel has a special suite, with a clever mirror.
The Prince has been silly!.
His niece will be found in the Thames.
She was not his niece really.

I am going to throw up.