Love in a Cold Climate

Only three months ago, I was reading about the gulags in 'Life and Fate', thinking how awful it would be to do hard labour in sub-zero temperatures. Now, by some cruel twist of fate, I'm doing exactly that. If Solzhenitsyn was still alive, I'd feel that I could look him in the eye.

Admitedly I'm not a political prisoner, there are no armed guards waiting to shoot me if I try to leave and I'm not mining uranium with my bare hands, so the analogy doesn't quite hold up. But it has been very cold.

However, it will have all been worthwhile if I can find some decent books. For the time being, here are some indecent ones that I found today: 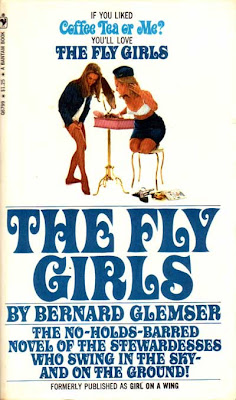 "Underneath their uniforms, they were simply girls - warm, soft, yielding creatures who lived fast and loved too recklessly..." 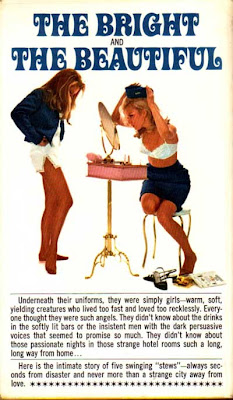 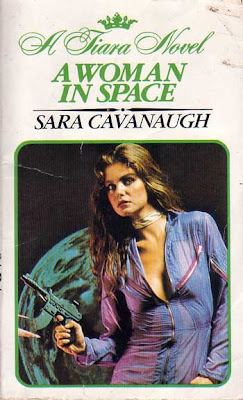 "She's young, she's lovely - she's an astronaut! And she's been assigned a dangerous mission: to discover the whereabouts of four missing male astronauts who had preceded her to the moon."

If this was the 1970s, I could make a link using the words 'moon' and 'heavenly bodies': 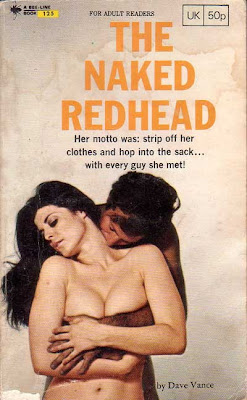 "Laura was the kind of woman that every man wanted to undress - but she never gave them the chance - she did it herself!"

This nonsense all stopped in the early 80s. Was it just AIDS that made promiscuity less appealing or were there other factors too, like the demise of modernism, the growing realisation that sexual liberation had been rather one-sided and the increasing demand for equal opportunities? Also, what part did technology play - first the video recorder, then the internet - in putting an end to 'sauce' and 'titilation'?

Oddly enough, I don't find the images themselves that dated. Look at the video of Pixie Lott's 'What Do You Take Me For?' and it's as if the 1980s never happened. What really dates these books are the hilarious blurbs, with their "warm, soft, yielding creatures..."

It all seems a world away from this: 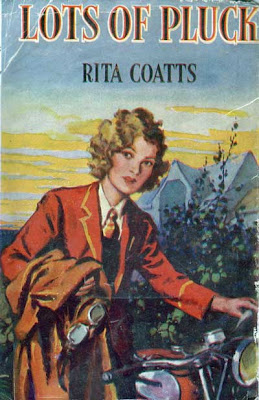 Posted by Steerforth at 9:35 pm

Interesting musings. I wonder if the naked redhead did not in fact become "Miss Pluck", with her mannish clothes and her motorcycle.

I came of age in the '70's, and I witnessed the rise of feminism. Yes, in short, women began to demand respect and equality. Think of Jane Fonda: from "Barbarella" to "Nine to Five". Our recently retired library director had been a stewardess.

It's been interesting to see the fascination with recreations of that era in the TV series, "Mad Men" and "Pan Am". It seems like another world now.

Great post, Steerforth. I've missed the 'interesting' covers. The last title seems so much at odds with the rest. Perhaps if it was written today, it would be called 'Lots of Waxing'?

Strangely, the WV is oxyspoop

Those stories of air hostesses are not far off if what I've heard from the father of one is to be believed!

I do remember this type of cover being around when I was, of course, young and impressionable, though not these particuar titles I hasten to add. The contrast with the plucky young lady in the last one is remakable.

It's -12C here in Michigan - it has GOT to be warmer in the UK! Love the covers - I inherited a number of old 'pulp' paperbacks when my grandfather passed away...it was a golden era....

Kim - Yes, it is much milder here - I'm just not used to working in places where the ice is inside the building. My grandfather, who fought in the trenches and worked in all weathers, would have laughed at me.

zmkc - I think you're right. It's a very poor translation of that well known maxim: Et ad omnem hominem in lecto disrobe.

Nell - I'd be surprised if anyone remembers these titles. I must have looked at thousands of paperbacks over the last few years and I've never come across them before.

Richmonde - I think you have a point - my mother-in-law followed that very path, from being a 1950s lacrosse-playing boarding school girl to a 1960s frequenter of Soho pubs!

Sarah - I worked with a former 1960s air hostess and I remember hearing some horrifying anecdotes about former WW2 RAF pilots who were usually drunk before taking off. As far as sexual shenanigans went, she didn't tell and I didn't ask.

Martin - That reminds me of my missionary aunt who, when we were watching television, announced "She's got a lot of spunk in her!" Being a teenage boy, I saw sexual innuendos everywhere and sat silently sniggering.

Brett - The era of Mad Men may seem like another age, but the boardroom is still predominantly male. I don't think things have changed as much as some would have us believe.

Kylie - I've just visited your blog. Is that beautiful room at the top yours?

Is it wrong to want to read those books?

The space one reminds me of Raquel Welch in Fantastic Voyage! She was clad in a silver jumpsuit with big hair in that.

Wonderful stuff. Am I the only one wondering why the naked redhead is a brunette?

i love those awful racy pulp paperbacks! I have a bunch of them. This one has the best premise, I think: "A shocking novel that reveals the spreading practice of wife-lending".

and the strapline is excellent:

"She was beautiful, seductive, desirable ... she was up for loan if the price was right. The lender was her husband!"

Mmm...they should warm you up.

Laura, she of the red hair.