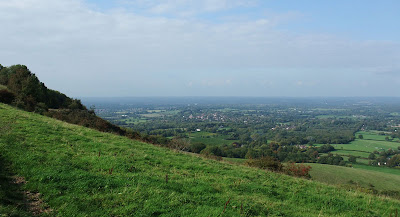 This afternoon, my oldest son and I caught a taxi to Ditchling Beacon and walked home along the South Downs Way. My son didn't want to go, but he is still young enough to be manipulated by false promises and cheap incentives. Once he was up on the Downs, the grunting and shoulder shrugging were replaced with animated conversations about serial killers and horror films.

It was a beautiful day, but halfway between the summer and winter solstices, the light had a muted quality, as if the sun itself was failing. 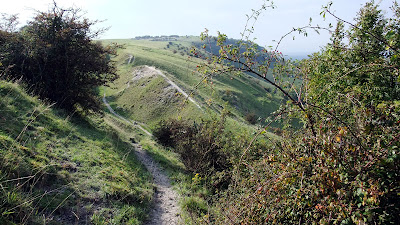 Frustratingly, rather than feeling overwhelmed by the beauty of the landscape, my mind played through a tracklist of annoying music: the theme tune of Lazy Town, a Sousa march, something by the Black-Eyed Peas, If You're Happy and You Know Clap Your Hands (my one gesture of defiance at primary school was to hold my hands wide apart during this song).

Then I started wondering if I hadn't made a terrible mistake when I handed my notice in. Every other news story last week seemed to be about the imminent collapse of the Western economy. Was this a good time to be leaving paid employment and setting up a business? Was I even setting up a business, or was I just quitting my job and pretending that I wasn't unemployed?

A man on a hang-glider hovered 50 feet above us, gently rising with the thermals. It was so quiet and the air so still that he must have heard my son's voice:

"Dad, ask me about any serial killer and I bet I'll have heard of them. Do you know about Leatherface? Do know what he did?"

Three weeks ago he knew nothing about Leatherface, but now that my son has started at secondary school he's suddenly a man of the world, determined to earn respect from his peers with his encyclopaedic knowledge of horror films that he has never actually seen. I hope.

The walk from Ditchling Beacon is perfect: only six miles and downhill all the way, with glorious views of the Weald on one side and the coast on the other. It is mostly open countryside, following ancient paths that enabled people to avoid the dense forests of the lowlands. Sadly, wooded areas like 'Black Cap' are a rarity now: 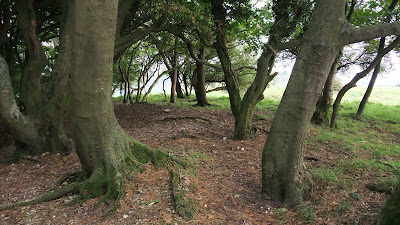 Further on, Lewes appeared in the distance, so far away that like an astronaut on the moon, I could blot it out with one hand. I liked the fact that it was so finite. I had grown up in suburban London, where one town simply merged into another, sometimes worse than the previous mile, sometimes better.

A young girl galloped past on a colt and I felt a vicarious rush of pleasure. My son turned to me:

"Dad, can we watch The Ring? Not the original version - that's an 18, but the American one, because that's only 15. Don't ask Mum, she'll say no. Can we? Several of my friends at school have seen it."

He reeled off a list of names that sounded like characters from Blake's Seven. Why aren't children just called John and Mary any more? I blame Dynasty and Home and Away.

As we reached the outskirts of Lewes, I realised how many things had changed in the last year. We'd had an awful time, but it hadn't lasted. Seeing my mother, blissfully happy in her new home and my son, confidently ambling home with his new friends at a school I never thought we'd get him to, I felt relief more than joy; like someone who has survived a storm at sea.

We turned the corner into our road and I told my son that he'd just walked six miles, rather than the three I'd led him to believe. "You didn't get even slightly tired. You should be proud of yourself."

He turned to me. "Dad, when we get home, will you watch Creep with me?"
Posted by Steerforth at 9:13 pm

The fact your son said "Several of my friends at school have seen it" should give you some cheer, because it means he's still telling you something close to the truth. Most teenagers would've said that "EVERYONE has already seen it."

I think you should approach a local paper with a view to writing little articles along the lines of this post. Maybe even 'The People's Friend'. Your posts fit right in with that sort of stuff. It would bring in a few extra quid when things are slow.

"Was this a good time to be leaving paid employment and setting up a business?" - Who's to say that your new venture won't ultimately be the safer bet? Have faith, Steerforth, it'll work out fine.

I always wanted to watch Dynasty and Home and Away, but wasn't allowed.
Horror films and serial killers are areas of interest to me, no wonder my 12 year old's friend think I'm 'cool'. Who was that serial killer with the hotel he had built to kill people in their rooms?

Your son and mother being settled is thanks to you and your wife's dedication. And even if the book venture isn't a roaring success, being around to see more of your family will be reward enough?
I think you know enough about the book business to shift those books, you've just got to keep focussing on the lovely view ahead, like you did on your walk.

P.s simple bribe days are over for me "I want a Blackberry mum, ALL my friends have one". Hmm..

I can't get my two to go for a walk unless there's a ruined castle along the way. They'd much rather go by mountain bike now.

Roy - I think you're right. He still wants to tell me what's going on in his life. The most important thing I can do is listen.

Kid - 'People's Friend'? Damned by faint praise is the phrase that springs to mind ;)

Martin - I hope you're right. I think this is just a last minute wobble.

Lucy - To my amazement, my son didn't complain at all when I gave him a £17 Nokia phone for his first mobile. I wonder how long it will be before he demands (and doesn't get) a Blackberry.

Sarah - It's a shame they won't go walking, but at least they've swapped it for mountain biking rather than staring at a screen.

Well, never having actually read an issue of People's Friend, I can't say if it was faint praise or not. I merely meant that your 'heartwarming tales of home and hearth' deserved a wider audience and that perhaps you could make money from them.

Sympathies. The theme from Lazy Town beats Leatherface for horror hands down.

Kid - Thanks Kid. My only knowledge of 'The People's Friend' is limited to waiting rooms in surgeries and dental clinics and I remember finding it unreadable, so that's why I was slightly crestfallen. I better now I know you haven't read one.

Parrot - I can't stress how happy I am that both of my sons are now too old for Lazy Town.

At least you knew the economy was in the crapper going into it - no surprises. I tried a similar thing Feb. of 2008. Not as good an idea as I thought... Wound up back doing my old work. No security anyway! You never know until you try, so go for it.

Last minute wobbles aren’t unusual, and to be expected. I hope it’s balanced out with a bit of a 'butterfly tummy' of excitement too. Any big life-changing step is bound to come with moments of self-doubt alternating with ones of absolute conviction that you are doing the right thing.

The walk sounds lovely and how wonderful to have such charming company!

Séamas - Hopefully the stakes are low. I've been expecting this recession since 2004, so I've spent the last seven years paying off debts and doing up the house. If it all goes wrong, we can live off roadkill and wild berries.

Little Nell - I'll feel excited when I actually have some books to sell! It's proving to be more complicated than I thought.

It's perfectly normal to feel nervous about setting up on your own.
I went freelance 3 1/2 years ago (as a translator) and it's the best thing I ever did.
It's by no means an easy option, but the satisfaction of working for yourself, not having a boss and the idea of building something more than compensates for this.
Life is just too short to muck around. Death or Glory!
Best of luck

What a fantastic post, I want to jump into the old waSaabi, drive to Calais, get on a ferry and drive to ... er, wherever the South Downs way is, and go for a walk. :D The photos ... *sigh* It's been way too long since our last UK holiday.

Good luck with finding some books! I'm sure you can make this work. :)

ps my first step towards fulltime freelancing begins next week. I am SO NERVOUS and SO EXCITED even though it's initially not much of a change to my life. It's the feeling of the Big Step into the Unknown that's doing it.

Big M - You've summed it up neatly: "Death or glory!" I'm glad to read that you don't have any regrets. I don't feel as if I have a choice.

Camilla - Geographically, the South Downs aren't that far from Belgium, but the roads mean that it's a two hour drive from the Channel Tunnel terminal.

I'll be able to give you a more precise timing soon, as I'm thinking of driving to Belgium in October.

Good luck with the freelancing.!

Ohhh which part of Belgium are you going to be visiting? Hopefully there will still be some leaves on the trees with this crazy weather - the Belgian countryside in autumn is very pretty.

Thanks for your good wishes!

I haven't decided yet. It's a very loose plan. Any recommendations - particularly places that are off the tourist trail?

Forgive the very late response, but that was a great post (as always) Steerforth.

Yes, Robbie Rotten is very disturbing, but he's nothing compared to that awful girl with the pink hair.

Aaaghh! Have you already been to Belgium? I only just saw your reply!

If not, what sort of things are you interested in seeing? Nature, history ...?