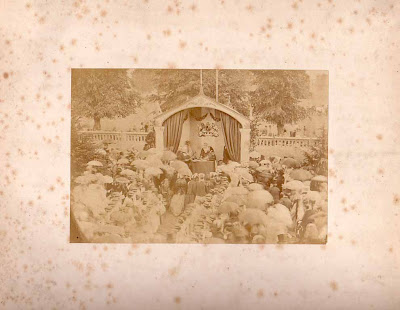 I found this photo at work yesterday and almost threw it away, but there was something intriguing about the scene. Who was the mysterious figure in the centre who had drawn such a large crowd?

The image was of a fairly poor quality, but I hoped that a high resolution scan might resolve the enigma.

I scanned the image at 1200 dpi, which is more than adequate for most old photographs, and let Photoshop work its magic, enlarging different sections.

Here are the results: 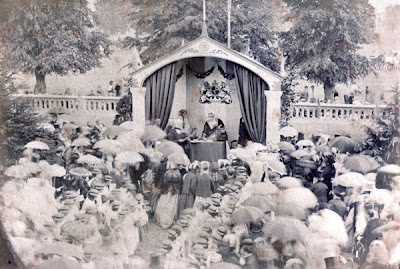 This is the full photo after the colour balance and contrast have been improved (apologies to all fans of sepia). There is a greater clarity, but the figure in the centre remains tantalisingly elusive. 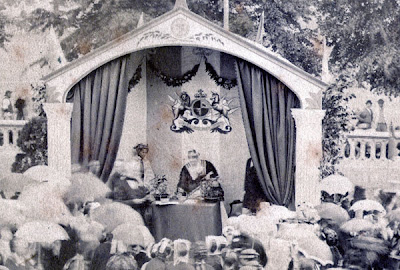 Now everything becomes much clearer, apart from the blurred figures of the men at the front. Is that who I think it is? 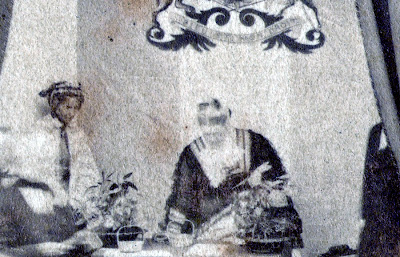 A further zoom has expanded the crest above the woman's head to a resolution where some of the writing is legible.

It is, of course, the Royal Coat of Arms, with its motto Dieu Et Mon Droit. I can only assume that it is Queen Victoria who has drawn such a large crowd on a rainy day. 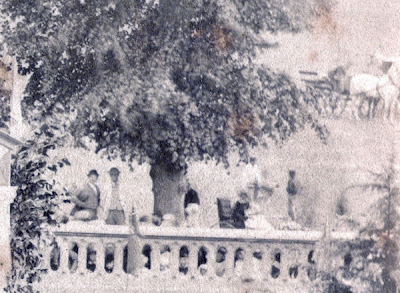 I have no idea where or when this picture was taken. Queen Victoria is wearing black and given that she went into a prolonged period of mourning after Prince Albert's death, this must be the late 1860s, at the very earliest.

Perhaps someone who knows about fashion will be able to determine which decade this photograph was taken in. I would certainly like to know about the significance of these hats: 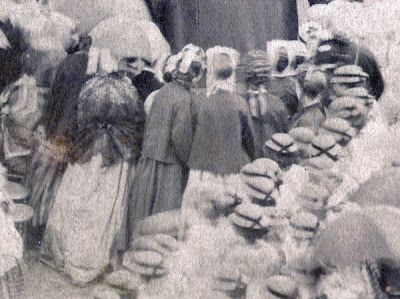 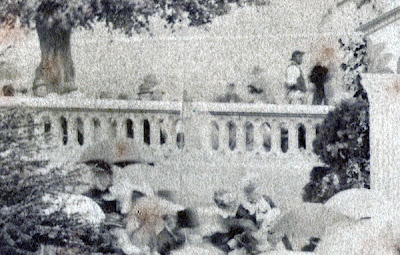 Scanned at 1200 dpi, the enlarged sections look like a monochrome, pointilist crowdscape by Seurat. Most of the people have their backs turned to us and the few faces we can see are blank and expressionless.

All apart from one - the woman on Queen Victoria's right. She appears to be looking down, in deference to the Queen.

Of course I may be completely on the wrong track. Someone might recognise the enigmatic figure as 'Big Bertha' McMahon, the famous Victorian female heavyweight wrestler, or Dame Cynthia Partington-Ffoulkes, whose Temperance League speeches terrified pub landlords from Portsmouth to Perth.

It could even be an author signing session, perhaps by Mrs Henry Wood, if they did things like that in the nineteenth century.

However, I'm fairly confident that I've discovered a photograph of Queen Victoria.

If anyone has any observations or insights about the time and the place, I'd be very grateful. I would love to know more about this mysterious image.
Posted by Steerforth at 8:50 am

How very lovely, Steerforth, not only to have detective work, but to have mystifying material, such as this. For all the criticism made of Victorians, and their Queen, their were reasons for their apparent formality, which we, with all our self-expression, have not been able to countenance. There was amazing assurance in those days, such as we don't know, and loyalty wasn't questioned. Today, we liberate, but what is liberated doesn't always have manners...

I have mixed feelings about the Victorian age. In many ways I love it and occasionally fantasise about going back to the 1880s, but I'm always a 'gentleman' who lives in a rectory in the coutryside. I think my great-great-grandfather, who was a London cabbie and lived a hard life (dying at 53) would have probably had a different view.

What's interesting is how, on the surface, it was an age of moral certainties, but at the same time, Darwinism, the Industrial Revolution and the advent of socialism threatened to turn the world upside down.

Hmm, I'm not so sure - Queen Victoria was unbelievably teeny-tiny, she was only 4'11" when at her tallest and the gal in your photo seems much taller than that, plus she has the broad shoulders of a shotputter (so maybe it really is 'Big' Bertha McMahon, as you surmised. Admittedly, it could be Queen Vic standing on a box but, I dunno, the woman in the pic just seems too substantial.

The serried ranks of females wearing identical hats suggests some sort of school event - speech day perhaps? Would Victoria do that sort of thing? There's a relatively informal air about the proceedings - the crowd is very close, and there doesn't seem to be any security - but perhaps I'm bringing too much of a 21st-century perspective to it. The shape of her face doesn't seem quite right, what you can see of it, and neither does the coat of arms - it has a distinctly 'unofficial' air about it. But I'm theorising on very little evidence.

I hope the mystery gets solved!

What a wonderful find.

Could those be school hats perhaps?

I don’t know, somehow it doesn’t ‘feel’ like Queen Victoria. The hairstyle doesn’t seem right. Before i looked at your improved version I peered closely at it and I couldn’t make out the face. The hair decoration I first took for two enormous black eyes staring out, but then I wondered where the hair was, or thought perhaps it was a nun or some other religious person and the headress, being white, had merged with the background. My next thought was that it was cookery demonstration - Mrs Beeton perhaps? Anyway I’m glad you didn’t throw it away and that you shared it with us here.

School hats? Of course, I should have realised.

I take the point about the relative intimacy of the event - it does look a bit low key for the Queen.

Hmm...I'll have to do some further research into Victoria's public appearances and find some photos.

Look forward to an update. Almost looks like a signing of condolences, the mystery continues...

What a great set of photos. If I may cast a vote -- definitely Queen Victoria. Photos were expensive and precious in those days and only someone of her stature would warrant such a photograph -- or such a display of flowers.
Canadian Chickadee

Looks about 1860s - but the women seem to be a frumpy lot and their fashion sense could be out of date. Yes, the flat straw hats with ribbons look like school uniform. The hats with "lappets" could be widows' caps. Tantalising not to be able to see more clearly! But not Queen Vic, I think.

Victoria or not (not so important to me)great picture. I love the cropped shots of the crowd! Definitely a Seurat feel to them.

It doesn't appear to be Victoria to me, either. She did get quite rotound later in her life, but she was quite short and the lady in question does seem, as Mrs. Jones points out, rather substantial. I'm wondering if it's another member of the Royal family given the motto. Or maybe the queen hadn't come on stage yet and the women are members of her entourage. The best way to date a photo like this is through fashion and things like hair and beard styles. I'd venture to guess the date to be 1840s-1850s, looking at the bonnet of the lady on the left. Fascinating nonetheless and more research is in order - a great save!

This is a tough one. On balance, I'd suggest that this isn't Victoria. But that doesn't take anything away from the find, for me. I love these old photographs and the mysteries they throw up. Well saved!

It looks to me like a craft demonstration. I think the woman on her right and the women standing up front are watching what she is doing. She herself is focused on the table,. Her hands appear to be busy. There are empty baskets and other materials on the table. Is she making floral arrangements or baskets?

You win the Harriet Vane award for detective work! As a feminist writer, I find myself liking all the women present in that photograph. Too bad Queen Victoria wasn't signing an Equal Rights Amendment....

Does the presence of the Royal Coat of Arms make improbable
it being a celebrity?

Could it be a picture taken at the London World Exhibition 1862? Fashion seems about right, so does the photograph. It would be an event where such pictures were taken.

The debate continues, but I have no idea. The photos I've found of Queen Victoria look very similar, but that was probably the fashion of the time.

As for the presence of a coat of arms, I'd love to know whether that was normal or unusual.

Caroline - I don't think it was 1862 because my very meagre amount of research suggests that Victoria withdrew from all public engagements for at least five years after Albert's death in 1861.

One interesting fact that came out of my 'research' is that almost every reigning European monarch is descended from Queen Victoria.

Having grown up playing in the ruins - I recognise that stonework is from the Crystal Palace.

Do you mind if I post this to AskMetaFilter? It's a large internet community and the Ask subsection is filled with all kinds of subject specialists and interested layfolk who'll be thrilled to try to clear up the mystery of the woman's identity, especially if it turns out to be a picture of Queen Victoria.

Yes, by all means please feel free to post this to AskMetaFilter - the more information I get the better.

Anon - thanks for identifying the location. I feel that I'm another step nearer an answer now.

Any chance of a higher rez scan of the whole thing?

Nothing much came of the AskMetaFilter thread, though a couple of the answers are interesting:

Actually, I've started to wonder whether this might be some sort of theater. There's something very theatrical about that stage. Either way, it's still unresolved.

Unrelated... the "word verification" spawned "haricrat" which sounds like some blogger's term of derision for people who defend Johann Hari.

þakka þér, Kári - my gut feeling is that it is Queen Victoria, but I realise that this is merely because I want to believe and don't know enough about the period to think of an alternative!

I like the verification. Hari certainly inspires strong feelings.