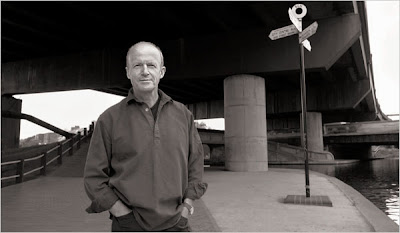 Jim Crace precedes his 1999 novel, Being Dead, with the quote from a poem by Sherwin Stephens:

Don't count on Heaven, or on Hell. You're dead. That's it. Adieu. Farewell. Eternity awaits? Oh, sure! It's Putrefaction and Manure And unrelenting Rot, Rot, Rot, As you regress, from Zoo. to Bot. I'll Grieve, of course, Departing wife, Though Grieving's never Lengthened Life Or coaxed a single extra Breath Out of a Body touched by Death.

I bought a copy of Crace's novel a couple of weeks ago and loved it. If you haven't read the book, it can be summed-up fairly succinctly: a couple in their fifties are murdered on a beach and what follows is a post-mortem of their lives and the physical processes that occur between the moment of death and the discovery of the bodies.

In the hands of a lesser writer, a description of the putrefication of the victims' bodies would be repugnant, but Crace's breathtakingly good prose finds a poignant beauty in the natural processes that occur. This is the atheist vision of death: meaningless, loveless and hopeless, but also without evil. For Crace, death is not the undiscovered country, but a process that can be chronicled with scientific precision. Crace's undiscovered country is life and memory.

However, there was one thing I found difficult about Being Dead and although I've searched extensively on Google, I haven't found a satisfactory answer. Where is the novel set? A sense of place is vital in a novel and even if the setting is a fictitious one, it is usually dovetailed into an instantly reconisable landscape. We know that Trollope's Barchester Chronicles are set in a southern English cathedral city, whilst David Lodge's University of Rummidge is clearly a thinly-disguised Birmingham. But where is Being Dead?

At first I assumed that Crace had set his novel in Britain, but I soon became aware of incongruities that was increasingly distracting as the narrative progressed. A mention of the 'local manac beans (and) green milk' was rather confusing, as were the references to drinking gleewater and Boulevard liquer. I went through a list of possible suspects: the West Indies, Australia, South Africa, New Zealand and even Spain, but nothing fitted.

There was no gleewater or Boulevard liquer anywhere. Neither was there a poet called Sherwin Stephens. For some reason, Crace had decided to set this novel in a fictitious, unnamed country that contained elements of recognisable landscapes, but juxtaposed in a way that was unlike anywhere on earth. For me, that was the greatest mystery of Being Dead.

Email ThisBlogThis!Share to TwitterShare to FacebookShare to Pinterest
Labels: being dead, jim crace

It's a superb book, I agree. My assumption was that Baritone Bay was truly a non-place (or an every-place). In my mind at least, it was half Wales and half New South Wales. You probably already know this, but Crace in generally little interested in research; all of the insects (not to mention their details and specificities) including sprayhoppers are fictive, as is the custom of 'quivering' and 'Mondazy's Fish', and, as you discovered, so is Sherwin Stephens. Thus, I kind of assumed, the location is similarly intended as nowhere and everywhere: topologically unreal and therefore unspecific.

This discussion of place is fascinating, and I would suspect - as HY surmises - that Crace is deliberately vague for sound literary reasons. (I haven't read the book yet.) My own novel - Writing Therapy - is set both in the past (a 1980s mental hospital of a type no longer in existence) and in the imagination of the main protagonist - a young girl/would-be author as well as in the pages of the books she reads. Sounds complicated, but the story naturally demanded it, and I couldn't have written it any other way. Setting is usually a function of the plot, and in Crace's book the story seems literally to inhabit the 'no-mans land' of a non-existent afterlife. Thus the location doesn't actually exist! (I'm going to have to read it now to make sense of all this speculation!)

Thanks for your comments. I think you're right about Crace's rationale.

I had a similar bee in my bonnet about Rupert Thomson's 'The Insult', which also upset my literary satnav.

It's a weird one (and a wonderful book): some of the details fit the bit of Australia where I live, so I initially assumed he'd mugged up on local detail when he was a guest of the Adelaide Writers' Week, until reading further added details that didn't fit Australia AT ALL. Confusing. But then the man invented a whole extra continent for 'Continent', so he's got form.

Crace makes up all his own epigraphs (and most of his insects and places, as hy has pointed out). The one for Being Dead actually changed slightly from hardback to paperback (which was signal enough that Crace had written it himself): instead of

it had the slightly more curious

In his 1992 novel Arcadia, he created this epigraph:

"The tallest buildings throw the longest Shadows
(thus Great Men make their mark by
blocking out the Sun,
and, seeking Warmth themselves, cast
Cold upon the rest)."
- Emile dell'Ova, Truismes
Editions Baratin, Paris, 1774

and for Signals of Distress it was this, supposedly by Abraham Howper, from Hoc Genus Omne, vii:

"This stranger's footprints are engrav'd in frost,
But soon forgot.
The sun bedazzles. They are lost.
And he has not
Impress'd his passage on this spot
That rime's emboss'd,
Or left enduring signs
That he has cross'd
Our Parish lines."

He used Howper again, I think, in The Devil's Larder, but I don't have that to hand.

I loved this piece he had in the Guardian a few years ago, rather long but definitely worth it.

I am sure Mr Crace would be flattered to know one of his readers would dissect his sense of place so thoroughly.

Not to mention the possible renaissance implications of another review ten years after publication.

It's people like yourself who keep books alive Steerforth, when even the big hitters have such a short 'shelf-life' these days.

John - have you ever considered going on Mastermind?

Thanks for this. I hadn't read Jim Crace before. The witty article from the Guardian was much appreciated.

JRSM - I read that a film adaptation of the book was going to be set in Australia, so you weren't alone. For some reason I thought of Tasmania.

Laura - thanks for your kind words - undeserved, but much appreciated.

Presumably you bought a second hand copy, as, when I tried to order a customer a copy at the weekend I discovered that it is out of print and had to get one from the US. Out of print.

Yes, it was second-hand.

How odd that the book has been allowed to go out of print, unless Macmillan (who published Crace's latest novel) now have the rights to the backlist and will be issuing new editions.

I think the film adaptation is going to be by the Australian director Ray Lawrence, previously responsible for 'Lantana' and 'Jindabyne'. As you say, Steerforth, this certainly suggests that the narrative will be moved from Crace's everyplace to somewhere more specific. In 'Jindabyne', Lawrence transposed a Raymond Carver short story set on the Naches River in Washington state to the Snowy River in NSW, so it's the sort of thing he's done before.

I loved Lantana, so if it's by the same director I have high expectations.

It is curious that it's out of print, as it's one of his best novels. Pan (Picador) have the rights to all his books except Being Dead and Quarantine, which Penguin seem to have held on to. Why they have kept the latter in print but not the former is a mystery. (Well, not quite: Quarantine is clearly his best seller and the book he will be known for when he himself is being dead.)

Dammit, all this has made me want to reread some of his books.

Just thought of another author who invented his own epigraph: Fitzgerald in The Great Gatsby, the poem about a high-bouncing lover by 'Thomas Parkes D'Invilliers' (or something like that). I'm sure there must be lots of others.

Most of the epigraphs scattered through Walter Scott's books were made up by him.

Thomas Parke D'Invilliers, of gold-hatted high-bouncing fame, first turns up as one of Amory's Princeton chums in "This Side of Paradise"; presumably, in Fitzgerald's mind, he went on to have a career is fairly ropey lyric poetry, and thus was able to provide an epigraph for the later novel. A survey of fictional (i.e. author-created) epigraphs would be interesting.

happy to encounter your words about this book, me also, searching in vain the real 'Baristone Bay'..