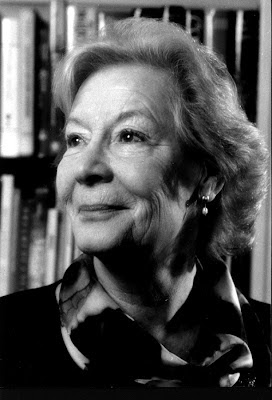 Until a couple of weeks ago, I only knew two things about Nina Bawden:
I never expected to read any of Nina Bawden's books, but I recently picked up a second hand copy of her 1976 novel Afternoon of a Good Woman. The cover isn't great, but as soon as I saw the word magistrate I had to buy the book, if only to see if Bawden's portrayal of a middle-aged female JP is remotely convincing. I was expecting a fairly lightweight, middlebrow tale of middle class, middle aged angst in Middle England and was caught off guard by Bawden's understated prose, with its mixture of compassion, quiet despair and world weary cynicism. As Virginia Woolf said of Middlemarch, this is definitely a novel novel for grown-ups and whilst it may not be a masterpiece, it is an intelligent, perceptive and moving read.

Afternoon of a Good Woman is still in print, but I wonder how many bookshops have a copy in stock? In the good old days of Waterstone's (i.e. when it was run by Tim Waterstone) we aimed to stock as wide a range of titles as possible. These days, even the larger branches of Waterstone's and Borders are extremely cautious when it comes to backlist. A few years ago I read Justin Cartwright's The Promise of Happiness and went to Waterstone's in Kingston to buy some of his other titles. They had one book in stock (even though Cartwright was part of the Richard and Judy selection). I moved on to Borders and found two titles.

The culprit is EPOS. As soon as you have a computerised stock control system you realise how few titles actually sell. As I have written before, I did some work for the Ottakar's intranet and had access to three years' worth of sales data for the whole company. It was a revelation. I learned that modern classics like Cry the Beloved Country sold fewer than a dozen copies a year across over 100 shops.

When I started in bookselling we probably stocked a lot of titles that never sold, but it was a fantastic shop! John Calder would regularly pop in to do a stock check and had carte blanche to order his entire list for us. I prided myself on stocking every novel by Trollope (nearly 50, I think) and our art section gave the Tate Gallery shop a run for its money.

Obviously things had to change after the demise of the Net Book Agreement, but it is a shame that the only place I'll now find Nina Bawden's Afternoon of a Good Woman is in a second hand bookshop.
Posted by Steerforth at 9:23 pm

If you can find her 'Devil by the Seaside' then I think you'll enjoy it. Sinister Highsmith/Bainbridge-like shenanigans.

After a frustrating and fruitless search on Amazon for JRSM's suggestion, I can now advise that its UK title appears to be Devil by the Sea...

Oh. Sorry about that. I should have checked before I blabbed. i's a good book, though!

I agree that bookshops used to be so much more interesting than they are now, but I understand that this does not necessarily help keep them open! Perhaps more of a push with the back list is the answer with a 'Nabokov week' or a
'Trollope week' and events are the way forward. Then again, the shop space also has to be conducive to events-holding which it is often not in a smaller shop.

The Devil by the Sea is available at Amazon Marketplace for a mere penny plus postage.