I was quite a sickly child and at ten, spent a year in an old-fashioned sanitorium. I don't remember it as a particularly distressing time. On the contrary, the prospect of not going to school and spending all day reading Enid Blyton books seemed too good to be true. I read and re-read the Famous Five, Secret Seven, Five Find Outers and even the Naughtiest Girl series. I liked them much more than some of the worthy but dull children's classics I received as Christmas presents.

I thought I'd read almost everything by Enid Blyton, but the other day I spotted a book in a charity shop called The Adventurous Four. It was only £1 (no full price books for me anymore), so I decided to buy it for my oldest son's bedtime story. At first he seemed underwhelmed by the narrative, but I persevered and by chapter five he was hooked, begging me not to stop. 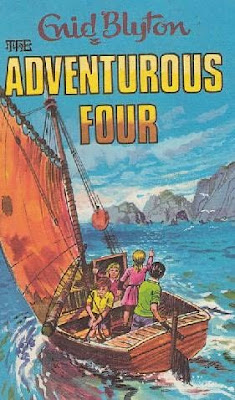 It's a corker of a story, written as a morale-booster for British children during the Second World War. The Adventurous Four consist of Tom, his twin sisters Jill and Mary and Andy, a local boy from the Scottish fishing village they are staying in. Their adventure begins when a simple boat trip goes horribly wrong and the children find themselves shipwrecked on a deserted island.

I know that some people hate Enid Blyton's books for their implausible plots, casual racism, two-dimensional characters, negative portrayals of women, jolly hockysticks dialogue and leaden prose, but there is a reason for their enduring popularity. Blyton taps into every child's fantasy, creating a world in which children are almost completely independent. Parents, aunts and uncles are peripheral figures and seem quite unperturbed when their kids disappear for several days at a time. The only grown-ups who are allowed a more significant role in the narrative are the baddies.

As I read The Adventurous Four to my son, it was clear that the main appeal of the story was the ingenuity of the children in dealing with the challenges they faced. When they successfully freed their shipwrecked boat from the rocks, he clapped his hands with excitement. Blyton's world, in which children are independent, competent, courageous and resourceful is far more attractive to the average eight-year-old child than some of the more critically acclaimed works of fiction.

I hope that my son isn't too heavily influenced by Enid Blyton. A few weeks ago I found him digging a huge hole in the garden and only later remembered that we'd recently watched The Great Escape together. If he starts saying 'Dash it!' then I'll know who the culprit is.
Posted by Steerforth at 11:52 pm

I loved Enid Blyton as a child. I wanted to be sent away to boarding school like the twins at St Clares, or be in the Secret Seven. I was completely oblivious to anything in the books apart from the wonderful adventures.

Reading the Magic Faraway Tree to my own twins though I can't help but do it in the very upper middle class way that the prose seems to insist upon, a kind of 50's English voice that makes me feel very Enid. I wonder how wide her appeal is.

Anyway, I do hope that you are ok, and send you very best wishes.

I remember Enid Blyton's books with great affection. I read all the Secret Seven books but somehow I never got round to the Famous Five. My favourites by far were her retellings of the Brer Rabbit stories and I made a point, when may daughter was born, of searching out all of them (I seem to recall there were three books) and she loved them too.

I love the fact that we can enjoy the narrartive on a completely different level, whereas some children's books are so tedious that I find myself yawning every ten seconds.

The worst offenders are the Mr Men series - far too much text - and the Rev Awdrey railway books, which I loved as a child but now seem incredibly dull.

I know someone who's five-year old daughter had been on a Blyton binge, and then kept staring at herself worriedly in the mirror. When she was asked what she was doing, she explained she was trying to see if she had "cold, cruel eyes"--a feature much in evidence in Blyton villains.

What a superb anecdote - I shall use that one. Five years old? She's a rather precocious child!

I loved Enid Blyton, too. As Sara says, the idea of being sent away to boarding school, or being quarantined for a minor illness and having nothing to do but run around all summer (it was always summer) getting 'as brown as a berry', was very seductive. And none of them ever seemed to have to wear a vest! The 'Adventure' series were my favourites.