Last week, Scott Pack posted this on his blog: 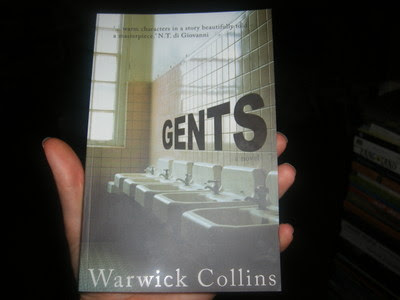 Look at this, it is a thing of beauty.

It is a book, obviously, but a very special book.

It is a lost classic. It is a masterpiece of modern literature. It is a telling parable of racial and sexual tolerance. It is a book that should be on every self-respecting shelf in the land.

It is also the first book I have ever published.

Yep, after nearly a year in the job a Friday Project book has come off the press that was signed and acquired by little old me. And I doubt that any book I ever publish will make me prouder (or is that more proud?, I neither know nor care).

You see, Gents was first published ten years ago by Marion Boyars. It received widespread critical acclaim, and sold OK, but has since slipped beneath the radar and you will be hard pressed to find a copy in your local bookshop or library. That isn't just a shame, it is a travesty. Gents is a remarkable piece of work and everyone I have foisted it upon has said the same thing: 'why haven't I heard of this before?'

Gents is quite possibly the best book you have never read. Unless, of course, you have, in which case I salute your good taste.

With a recommendation like this how could I resist, particularly when Scott was generously offering free copies. I emailed my request and when I returned home from work the next day, a copy was already on the doormat.

That evening I started reading Gents and within a few pages I was completely hooked. Set in a public lavatory, Gents depicts the attempts of its three attendants to control the rampant cottaging that takes place in the cubicles. That sounds like a recipe for an essay in grim, social realism, but it is a tribute to Collins' genius that he manages to create a novel that is both moving and funny.

As if that isn't a big enough achievement in itself, Collins' three main characters are Jamaican and a lot of the dialogue is in patois which, this grainy photo would suggest, isn't Collins' native tongue. That sounds like a recipe for disaster, but apparently Collins did it so well that many Afro-Caribbean readers assumed that he was a black writer.

It takes enough talent to set a novel in the claustrophobic setting of a public lavatory, but to give yourself the challenge of having three main characters from a different ethnic background and attempt to write their dialogue without stereotyping or patronising is nigh-on impossible. However Collins has somehow succeeded and Gents is one of those rare novels that makes you realise what fiction can do when it's pushed to the limit.
Posted by Steerforth at 6:17 pm