As if the wearing of Crocs isn't appalling enough in itself, I've now discovered that you can accessorize them with little plastic toys that neatly fit in the holes. Apparently they're called Jibbitz, which to my ears sounds more like a Jewish religious holiday. Here's a photo of the offending articles: 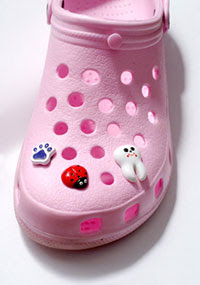 Utterly hideous. I should stress that I am not a complete killjoy and have no problem with children sporting Jibbitz on their Crocs. Indeed, I would probably have fancied some myself when I was eight. However when it comes to women in their 50s, it's hard to feel anything other than a mixture of revulsion and contempt. Grow up.

I have a cousin who is 60 and for years she has pretended to be disabled. She has a walking frame which has been accessorised with minature teddy bears and she takes it almost everywhere with her. The only exception is when a department store has a sale on and she needs to move quickly to get to the bargains before anyone else. Suddenly, 'Hallelujah!' - her legs start to work and she's halfway across the floor before anyone else has started moving.

I bet she wears Crocs.
Posted by Steerforth at 7:42 am

Yikes, as if the Croc phenomenon couldn't get any worse! They've been banned at some hospitals because they've been deemed unsafe. I think they should be banned entirely for being ugly!

There's a guy in my building who has one of those walking frames too. Every day a van from the rehab center drops him off at the building, and he shuffles to the front door - except when I'm already there with my key opening the door. Then he moves quickly, the walker off the ground (i.e offering no support), to get to the door while I'm there so he doesn't have to get out his key and unlock it himself! Last week I saw him walking to the door without it. Looked like he had no problems walking, either.

I bet your cousin gets the best sale stuff by using her walker as I'm sure everyone gets out of her way. (hmm, not a bad idea, actually...)

I understand the aesthetics of your croc hatred, but please, imagine this; I am a bookseller on my feet all day, I have health problems, one of which results in the soles of my feet feeling bruised and thus painful. Imagine my delight on trying on crocs and discovering that the bumpy innards work to help my feet feel less pain. Hurrah. I purchase black ones, and spy a wee skull and cross bones that I can insert into one hole thus making the shoe look less ugly to me. They are lightweight and washable. I too may be repelled by the sight of older people wearing those cer-azy day glo colours in a manner reminiscent of a whacky tie on a desperate suit, but comfort is all!

So glad to see that someone else hates the damn things.

Sara, you are exempt on medical grounds.

Being the arch-hypocrite that I am, I've just bought a pair!Not for me, you understand, but for my son.

Only a few hours after writing this post we went on a beach and our feet were cut to shreds by oyster shells hidden in the mudflats, so I have decided to buy a pair of size ones FOR BEACH USE ONLY.